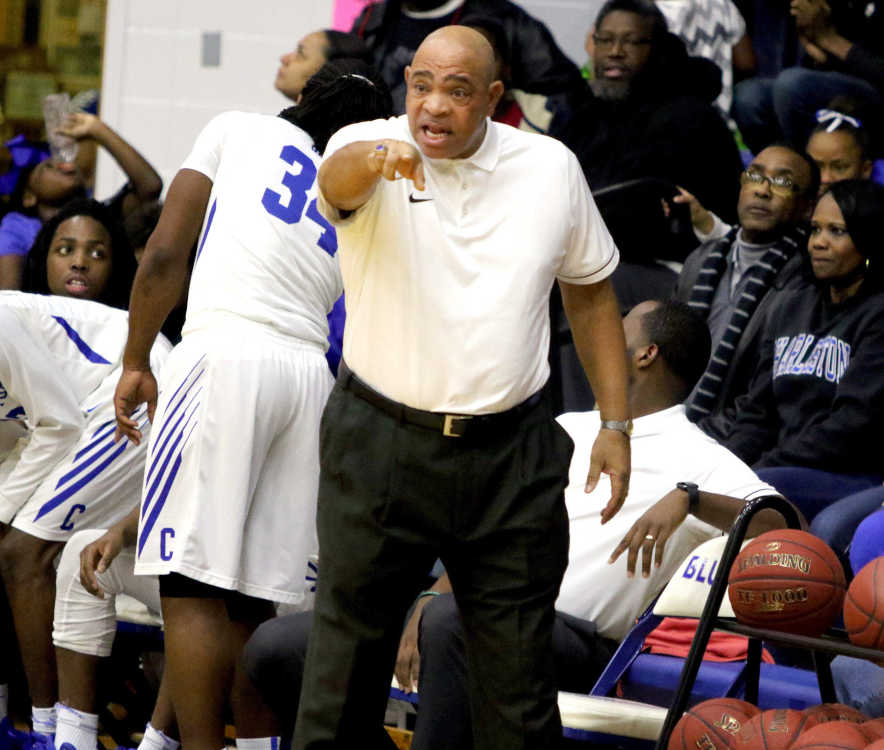 SIKESTON — Danny Farmer’s announcement to retire after the state championship game of the Class 3 Show-Me Showdown was one that he told his team at the beginning of the season.

For nearly five months, his decision was a secret.

On the sidelines with one team for over 20 years, Farmer now heads into a different direction — one without game plans and practices — while the Bluejays do the same.

Current and former coaches in the area also reacted to Farmer’s announcement.

Williams has been an assistant coach at Charleston for the past seven years.

“I was kind of surprised,” Williams said. “This was a conversation that we had many times before. But, it was the “when” of when he was going to retire. It was never solidified. He would say things like “When you take over,” or “Do this and do that,” and it was stuff like that. He would also say that you would still have this kid or that kid whenever it’s time for you to take over.

“That gives me a four-year window of when he’s going to retire, but it was never solidified. So, I knew the time was approaching.”

During a phone interview with the Standard-Democrat on Monday, Williams said that he hopes to be the next Charleston head coach.

Williams said that the way he would run the program — Charleston would be his first head coaching opportunity — in a similar fashion as Farmer and will treat everyone like family as well.

“Seeing him treat players the way that he did and giving them what they need,” said Williams on what he saw from Farmer over the years as a head coach. “He was a father figure. He treated each player as a guardian. This is high school basketball, everyone wants to win, but these relationships; if I treat these as four-year relationships, then to me, that doesn’t hold much value.”

Coaching was more than just wins and losses to Farmer, according to Williams.

Building long-lasting bonds and creating trust between everyone was one way Williams described Farmer’s methods.

“He’s definitely someone that cares deeply about the well-being of all of his players,” Williams said. “He’s very competitive, and he wants to win, but ironically, with him having over 1,000 career wins and more than 750 being with the boys, winning was not a priority in the grand scheme of things.

“He was all about hard work, on and off the court, and he never turns his back on anyone, including the players that are more difficult to coach. As far as I’ve been with him, for seven years, he has never kicked any of the players off the team. Regardless of how much these kids miss practice, try to get out of work; they may not play or get minutes, but he would never turn his back on any of his players.”

Being under his wing for nearly a decade, Williams talked about some of the memories during his time with Farmer.

One was the interaction.

“The speeches he would give in practice or pre-game speeches; they were funny,” Williams said. “He would say things, and he would get everyone’s attention, and then he would say something that would have the entire locker room laughing. As long as I’ve known him, he’s been that way. The time I was a player up until I was coaching with him.

“It is the exact same. His players trust him. We enjoy being around him and just having conversations with him. I know sometimes, we’ll have players sit with us after practice, and we may talk for 10-15 minutes.”

Another was the joy of winning.

The record speaks for itself, and Williams added that out of both state titles, the first one seemed to mean more than any other.

“That was his first state title with the boys,” Williams said. “I was a senior on that team, and that was his fifth trip there as a head coach. I remember everyone being so excited that we had won — that was our 10th state title — and we all went to the media room, and he was glowing.

Lastly, was the routine.

No matter where a road game was at, Williams said that everything stayed status quo.

“What I appreciate about him is regardless of what time we get back from a game — a road game — we always do laundry the same night,” Williams said. “While we’re waiting on the clothes, he’ll always sit in the office, confirm the stats, and then we analyze the game. That’s when I learned that it was so much more to coaching. It was hardly ever about Xs and Os. We just talked about the players. What can they do, how can we put them in the most successful position? He was almost like a psychologist. He just knew how to talk to each specific player.”

Rivals on-the-court, Sikeston head coach Gregg Holifield has had his fair share of battles with Farmer over the last two decades on opposing sidelines.

One thing is a sure, though, and that is how hard Farmer’s teams would play on every given night.

“It’s been so much fun over the year,” Holifield said. “It’s been a lot of tough games, and one thing with Coach Farmer’s teams is that they always compete as hard as they can. They’re difficult to go against, and we have quite a rivalry here with Charleston and just over the past 20-plus years. There have been some great games that have gone down to the wire and unbelievable atmospheres and experiences for me as an opposing coach.”

Becoming a great coach was bound to happen for Farmer.

When you look at Farmer’s track record, the legendary names that he either played for or coached under are some of the best in the entire state.

“From the beginning, I figured he was going to be a heck of a coach,” McFerren said. “There was no surprise that he turned out to be a Hall of Fame coach because he worked with a Hall of Fame coach, in Ron Cookson. If you surround yourself with good people like Ron Cookson and Bobby Spencer, it’s not a surprise that he accomplished as much as he accomplished. As a player, he was a competitor, and you can talk to him and feel just by talking to him that he expected the best and the most out of the young men that he coached. They don’t realize how much of an impact Danny had with those kids. They all worked hard for him.”

For 10 years, Farmer was alongside Ron Cookson during a stretch where Scott County Central won seven straight state championships and eight of nine.

He was also the head coach of the girls’ basketball team, winning five state championships during that time as well.

“Danny was always energetic and worked at it hard,” Cookson said. “He put a lot of time into it, a lot of thought and did a real good job. He was a real good person, and I enjoyed working with him. I knew when he moved on from Scott Central, that he would be successful.”