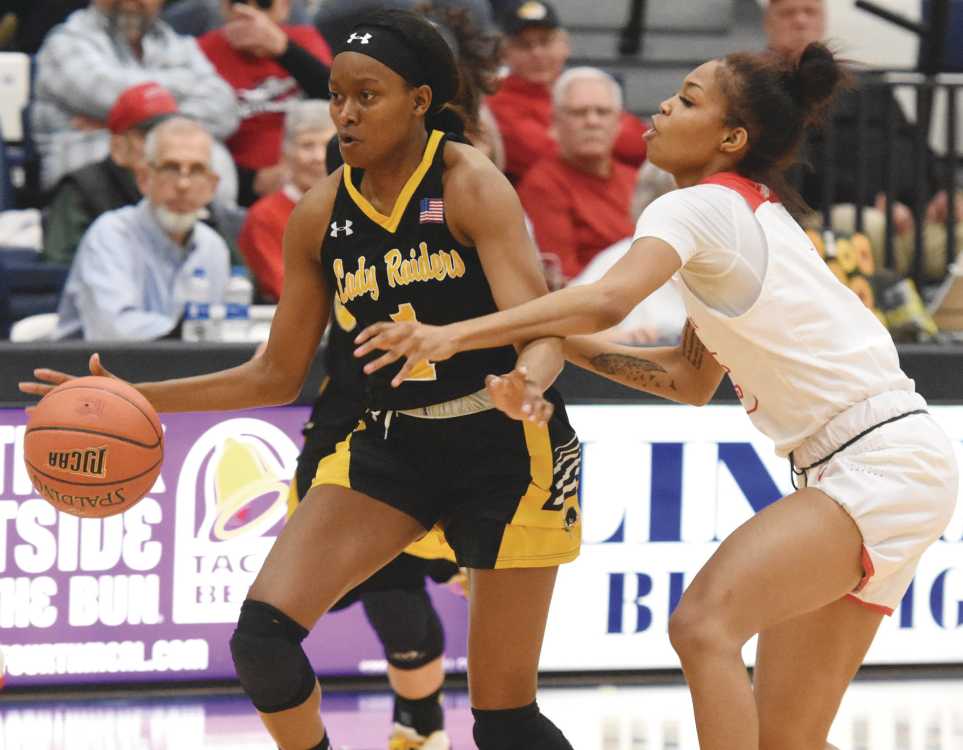 Watson also led Three Rivers with 56.1% shooting, one of two players on the team to shoot better than 50% for the season.

With track speed, Watson was a focal point of the Three Rivers press and was consistently finishing turnovers for layups while the Raider offense finished the season fourth in the country in points per game.

All this, and Watson didn't start playing basketball until her junior year in high school. She says the biggest differences between now and then are her dribbling — she didn't really know how to do that — and to mentally always keep a positive attitude, keep going and don't give up.

"To accomplish all the stuff she has accomplished in five years is pretty special," Three Rivers coach Alex Wiggs said. "Her best years of basketball are ahead of her. She is going to get so much better … she is just now starting to figure things out from a basketball standpoint."

Watson ran track at Manatee High School, set the school record in the 100-meter dash in 12.5 seconds. She also ran the 200, 4x100 and 4x400 races. On her wall, her track trophies are in the middle and the basketball awards are on the outside.

Travis Persinger, and old friend of Wiggs' from their time coaching together at Moberly Area, took over the Manatee basketball program during Watson's junior year. One day, Persinger called Wiggs and said he had a Division I athlete. Three Rivers, willing to take a chance on a good kid with potential, was Watson's only basketball offer.

"I wasn't big into basketball," Watson said. "I just always wanted to do something different. When I got the opportunity I thought, 'Yeah, I'm going to go for it.'"

Added Wiggs, "To take the chance on us, moving from Florida all the way to Southeast Missouri. All the hard work and what she has done the last few years to grow and develop on the court has been tremendous."

Watson was raw. She didn't have any bad habits, she just didn't know what she didn't know. She redshirted her first year at Three Rivers and remembers not really knowing what to do or how to do it in the beginning. He dribbling was not that good, the ball would get knocked out of her hands or she would get knocked over because she wasn't that strong.

"Coming from Florida to Missouri and not being able to play had a down moment on me," Watson said. "At the end of the day, it really helped me develop my basketball and schoolwork as well. It was a sad year but the outcome became a great outcome."

Still, she felt at home, which was a big reason why she signed with SEMO.

"When I first got there, they just made it feel like home," said Watson, who recalls feeling like she was already family by how she was greeted during her unofficial visit. "It was pretty awesome and I'm really excited about it. I feel like it is a great opportunity to move on to a four-year university."

Watson went from not really knowing how to dribble to averaging 13.2 points, 8.2 rebounds, 1.3 steals and 1.3 assists as a freshman. She led the team in rebounds and was second in scoring to All-American sophomore Hailee Erickson, whose only offer out of high school was also Three Rivers and went on to sign with Arkansas State.

Watson started every game as a freshman while the Raiders swept the Region XVI schedule en route to their first appearance in the national tournament since 2004.

Watson had 12 points and 13 rebounds in Three Rivers' first-round 88-84 loss to No. 9 Jones, and recruiting interest picked up soon after. Before the tournament, Watson didn't even think playing at a four-year school was a possibility. After the tournament, she thought, "Wow, I'm really that good."

Now, she's just beginning to wonder if playing professionally is a possibility.

"I didn't put too much thought into it," said Watson, who will study pre-law at SEMO. "But then I thought, maybe I should think about it because everything is coming at me so fast."