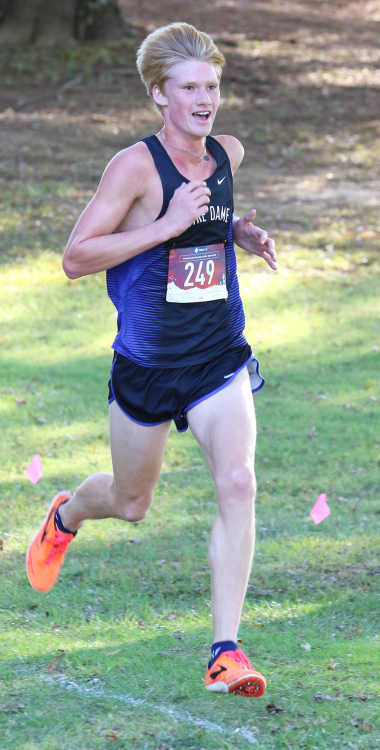 The 2019 cross country season resulted in a 2019 Class 1 state championship for the boys of Oak Ridge High School, coached by Kristi Seyer.

The top finish by the Blue Jays follows the boys’ runner-up finish at state in 2018.

Oak Ridge and Jackson placed three boys each on the All-Southeast Missourian team, St. Vincent had two, with one each from Meadow Heights, Notre Dame, and Woodland.

Missouri recruit and Notre Dame senior Blake Morris heads the team as the 2019 Boy’s Cross Country Runner of the Year.

The choice of Morris, 17, to lead the team is straightforward.

Morris’ time in the five-kilometer race (16:02.1) was good enough for seventh in the Class 3 competition.

Morris finished 33 seconds behind the winner.

Morris was disappointed in what he viewed as the biggest race of his life to-date.

“I’m not making excuses,” Morris said. “I wasn’t feeling 100 percent (in the race) and could tell something was off.”

Morris’ coach, Richard Bohn, a 2008 Notre Dame alum and former runner himself, understands an athlete can’t predict his body on the day of a race.

“(Blake) was in the lead early (at state),” Bohn said, “but it was clear he wasn’t feeling great that day.

“(Morris) was hurting the whole time but gave everything he had.”

“I felt some pressure since some had me penciled in as the projected winner,” Morris said. “I’d never been in that spot before.”

Bohn says most cross country coaches follow the same routine in getting a runner ready for an important meet.

“The day before, he’ll run fewer miles but with faster sprints,” said Bohn, in his sixth year with the Bulldogs program and his second as head coach.

“After state, I took a short rest,” said Morris, “but ever since I’ve been training harder than ever.”

In track, Morris competes in the 800-meters, the mile and the two-mile.

“I definitely take a lot of joy when I run,” Morris said, who plans to major in business management in college.

“Sometimes (running) is a struggle, but it gives me a lot of pleasure.”

Other members of the honored squad include:

The senior led the Jackson boys in every race.

One of only a handful of freshmen to qualify for state, McCadams spent the summer before the cross country season as a competitive swimmer.

He posted a personal season-best 16:49 at the SEMO Conference meet and matched the time with his 110th place finish at Gans Creek.

He was also the Class 2 District 1 champion.

A member of the Class 1 champion boys cross country squad, the senior finished 14th in his division at the state meet with a time of 17:29.7.

The junior medaled in eight of 10 races in 2019 and established a personal season-best of 17:27 at the Oak Ridge Invitational.

A senior, Shrum medaled in nine of 11 contests.

One of three Blue Jays on the All-Southeast Missourian team, the junior posted a 22nd best time in Class 1 at Gans Creek (17:37.1).

The third entrant from Seyer’s squad on the All-Southeast Missourian squad, the junior’s time of 17:51.2 was good for 31st place in Class 1.