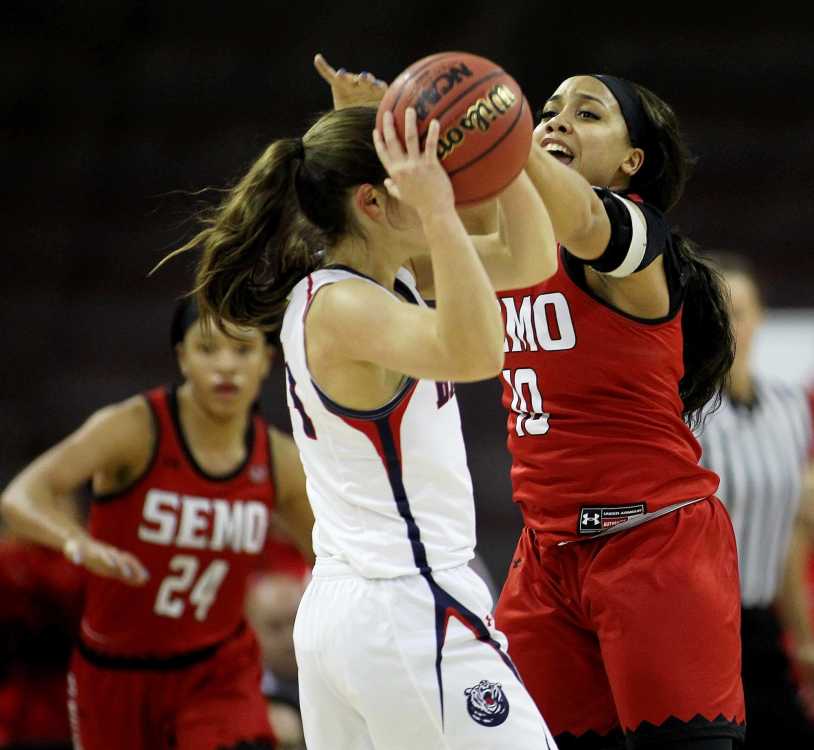 The only thing more challenging than finding a way to beat the Southeast Missouri State women’s basketball program this past season is to find JUST five pivotal moments within the most successful season in Redhawk history at the NCAA Division I level.

Southeast won 25 games (the most in program history at the Division I level) and earned a berth into the 2020 NCAA Tournament courtesy of their claiming the Ohio Valley Conference Tournament championship with a dominating 67-47 thrashing of top-seed UT Martin.

“The way that (Redhawk coach Rekha Patterson) represents us in the community is second to none,” Southeast athletic director Brady Barke said. “She is beloved in the community.”

Here is a glimpse of some of the best moments of the memorable 2019-20 season.

Southeast beat Mississippi in Oxford 70-53 in mid-December to improve to 6-2 and it did so in dominating fashion.

The Redhawks led for 39:13 of the 40-minute contest and placed four players in double figures, including junior forward Tesia Thompson (16 points), who went over 1,000 points for her career that night.

Southeast forced the host Rebels into 22 turnovers and earned the program’s first win on the road over an SEC opponent and just second overall.

UT Martin and Belmont were trying to hold off Southeast for first place in the Ohio Valley Conference in mid-February when the Skyhawks visited the Show Me Center.

The victory placed all three teams in a tie for first place with 11-2 league marks, while Southeast improved to 19-5 overall.

Eventual OVC Player of the Year, Chelsey Perry, played all 40 minutes for UT Martin and scored 36 points. However, the Redhawks got 22 points and nine rebounds out of Thompson in the win.

3. Pruitt to the rescue

The No. 3-seed Redhawks were the expected favorite to beat No. 6-seed Tennessee Tech in the opening round of the OVC Tournament. However, the Golden Eagles had other thoughts.

Tennessee Tech led by 10 early in the fourth quarter, before the Redhawks rallied to force overtime.

The Golden Eagles led 81-79 with the clock ticking down in overtime before Southeast sophomore shooter Taelour Pruitt launched a bomb with :01 left and won the game 82-81.

“The fight and resiliency of this team is amazing,” Patterson told Semoball.com afterward. “To be down 10 at the start of the fourth and to find a way back (playing) the SEMO way makes me so proud.”

There has been no OVC program more intimidating through recent seasons than Belmont.

The Bruins had won four consecutive league titles and ended the Redhawks’ season in the tournament a year earlier. However, Southeast ran past the Bruins in a 114-99 win.

Pruitt was on fire in raining in seven 3-pointers in as many attempts, while All-OVC players Thompson and Carrie Shephard combined for 68 points in the win.

Prior to the win, Belmont had beaten Southeast seven straight times.

One week after falling to UT Martin in the regular-season finale, the Redhawks got revenge by smoking the Skyhawks 67-47.

The win earned the program its first OVC Tournament title since 2007, as well as its first trip to the NCAA Tournament since that special season.

The Redhawks held the second-most accurate 3-point shooting team in the OVC to a horrific 0-for-11 night.