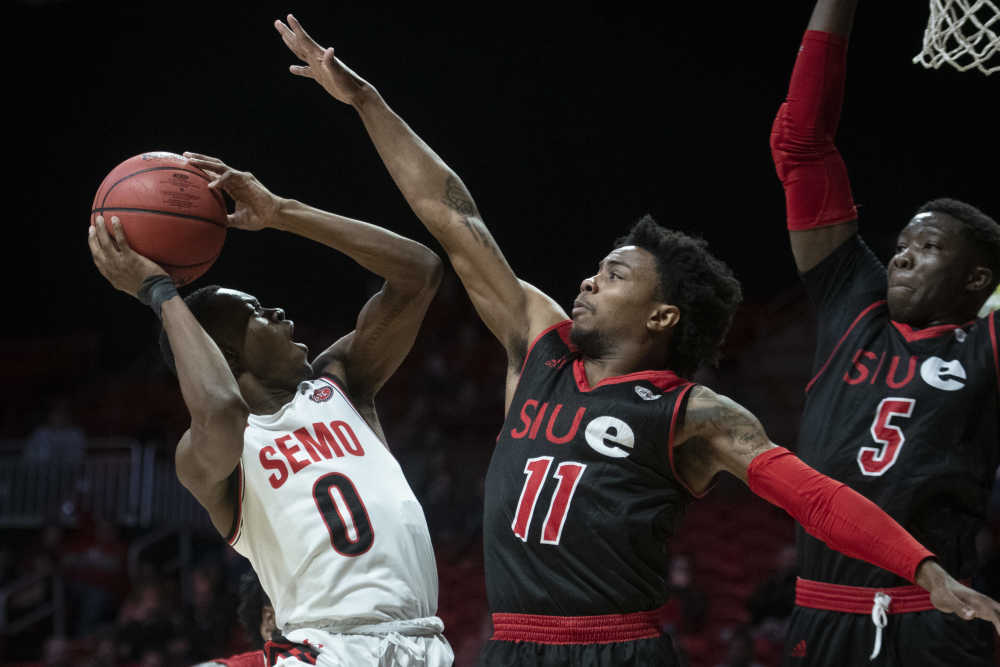 Southeast Missouri State sophomore Alex Caldwell (0) looks to put up a shot, while guarded by SIUE senior Tyresse Williford (11) and junior Mike Adewunmi (5), this past season at the Show Me Center.
Jacob Wiegand ~ Southeast Missourian
Order this photo

When Southeast Missouri State athletic director Brady Barke made the decision to replace men’s basketball coach Rick Ray earlier this month, he had asked for two things from the two signed Redhawk recruits, as well as the returning student-athletes:

“My hope with (the recruits),” Barke said, “is the same hope I have with any of our student-athletes, it’s that they give us an opportunity to identify the next person and put some trust in us to at least give it a chance.

“If at the end of the day, that doesn’t work, and they’re not comfortable with that, then we’ll cross that bridge when we get to it.”

The early indications are that Barke’s “hope” is not enough, because both Redhawk recruits in the class of 2020 (Phil Russell and Ramean Hinton) have de-committed from the program, as well as two returning players.

Junior forward Isaiah Gable announced recently that he was transferring out of the program and on Friday, the team’s leading scorer, sophomore guard Alex Caldwell, did, as well, according to the web site verbalcommits.com.

The loss of Caldwell marks the third consecutive season that the Redhawks’ leading scorer has elected to transfer. Two years ago, Denzel Mahoney left for Creighton, while Ledarrius Brewer transferred to East Tennessee State a year ago.

“I know when (the players) go through that process,” Barke said, “they certainly are committing and investing in a particular coach or staff that is in place at the time, and that changes. But I also feel like there is a level of commitment to us as an institution in the hope that they at least give us an opportunity to show them what the future will look like for them.” 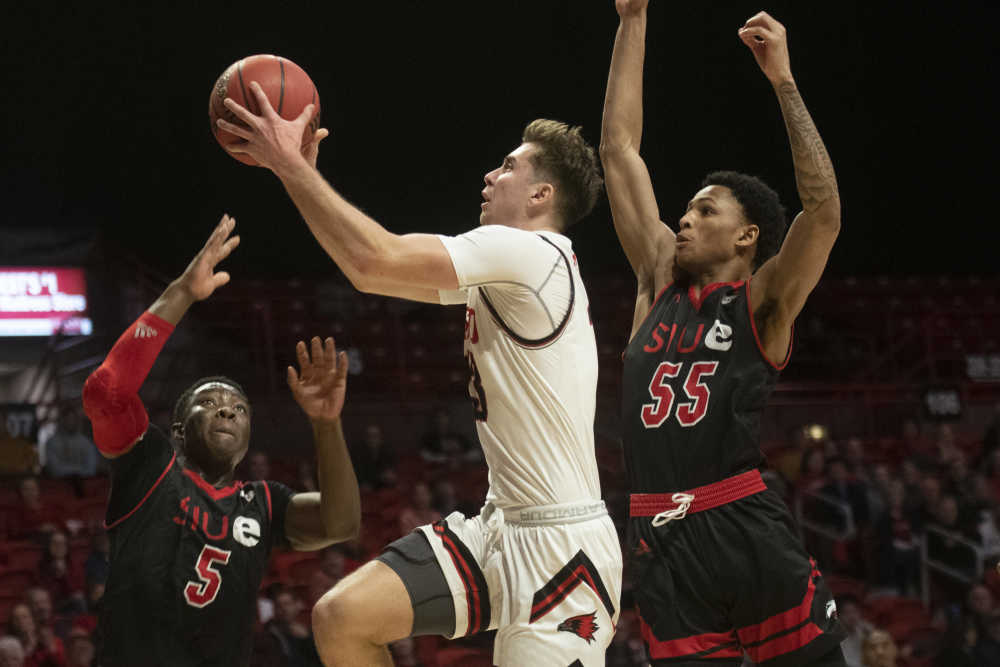 Southeast loses reserve forward to transfer
Tom Davis
What has become a rite of spring within the Southeast Missouri State men's basketball program showed the first sign of blossoming this year Sunday when college basketball writer Jeff Goodman of Stadium reported that Redhawk junior forward Isaiah Gable would be transferring.
The exodus of a Southeast player isn't surprising.

Caldwell moved into a starting role this season and evolved into one of – if not the – best player at Southeast.

The most impressive area of development for Caldwell was his assist-to-turnover ratio.

As a freshman, Caldwell dished for a mere 14 assists in 12 Ohio Valley Conference games, while turning the ball over 18 times.

With the four departures, as well as the fact that redshirt sophomore guard Khalil Cuffee was dismissed from the team in late February, Southeast has eight returning scholarship players and five available scholarships.

Caldwell becomes the 20th player in the past five Southeast recruiting classes to leave the program prior to their eligibility being completed. Only five athletes in the past five years have done so.

Comments
View 12 comments
Note: The nature of the Internet makes it impractical for our staff to review every comment. Please note that those who post comments on this website may do so using a screen name, which may or may not reflect a website user's actual name. Readers should be careful not to assign comments to real people who may have names similar to screen names. Refrain from obscenity in your comments, and to keep discussions civil, don't say anything in a way your grandmother would be ashamed to read.
Respond to this story