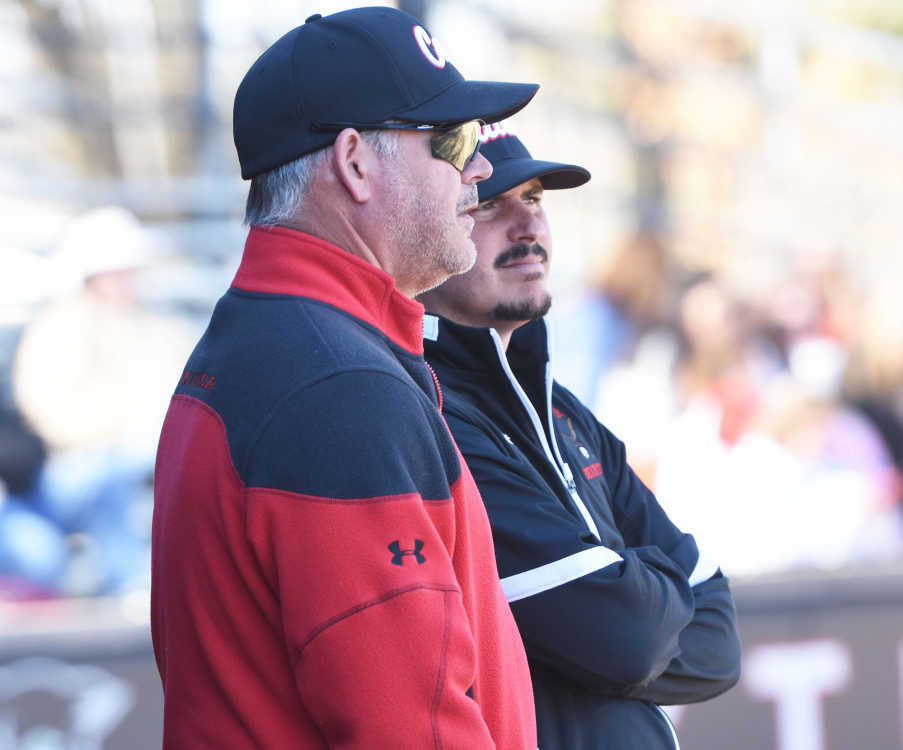 In this 2019 file photo, Dexter baseball head coach Drew Pixley, right, talks with assistant coach Aaron Pixley between innings at East Park. All schools in Stoddard County are out until at least April 6 because of COVID-19 and sports practices and games have been canceled until further notice.
DEXTER STATESMAN/Kyle Smith

Many Stoddard County coaches are using the spring sports shutdown as a teaching moment.

With all county schools out until at least April 6 because of COVID-19, practices and games have been canceled. School officials will determine when or if the spring seasons will begin once school is back in session.

Teams held their final practice on Tuesday, March 17, and coaches’ messages were similar in nature.

“I told the boys that this is something we can’t control,” Dexter baseball coach Drew Pixley said. “As much as we all hate it, everyone is just trying to take precautions and prevent a catastrophic event from happening.”

Bernie softball coach Brad Botsch said, “I told them that is an ever changing situation. We hope to get back into session, but we don’t have any control of what’s going on right now. I talked to them about finding time on their own, getting work in and throwing, but we want them to focus on their health and their families.”

Some coaches suggest their athletes use this time to spend with family.

“I told my guys that they should enjoy some time with their parents and siblings,” Dexter boys tennis coach Eric Boles said. “This situation is one where there are no clear-cut answers and that we will get through this. I also told them I am hopeful that we get in a couple of games later this season.”

Dexter track and field coach Kim Waldner said that her team’s final practice was like any other.

“We told our kids that they needed to stay in shape and keep working. In life a person works and sometimes they hit a roadblock, but that doesn't mean they should stop working and throw their hands up and say I quit,” she said. “Same concept with our track athletes, it's just a bump in the road, but you have to keep going.  Athleticism at this age teaches them so much more than the will to win. It teaches self-discipline, self-worth, wants and desires.”

“I hope it’s not our final practice and we didn’t approach it as so,” Sitze said. “We will continue to be hopeful that we can get back out there and have some type of season still. Everything is just a little shocking right now to everybody.”

All of the coaches feel for their seniors.

“It’s tough to look at these seniors and think that the spring season may not happen,” Botsch said. “We hope and pray things will (get better).”

“I am heartbroken for my seniors and my top players,” Boles said. “They may not get the chance to have this final season like all other high school students before them.”

Waldner said, “the seniors are disappointed about the thought of canceling a season but they understand the surrounding circumstances that's occurring.”

Pixley said that he had no answers for his seniors.

“As far as the seniors, they were pretty concerned. For a couple of them, baseball is the only sport they play,” Pixley said. “They had some questions, and I hate being vague, but that’s all we have right now. We have been given a minimum amount of days of no activity that could potentially keep growing. If it does, then more than likely we will miss the season. And I sure do hate that for them. Especially since we had a vision of improvement from last year.”

Boles wants his seniors to have a senior day.

“I really want to have some matches so they can have a senior season and a senior day,” Boles said. “I also want our freshmen to experience a season, no matter how short, so they can see why tennis is such a great sport.”