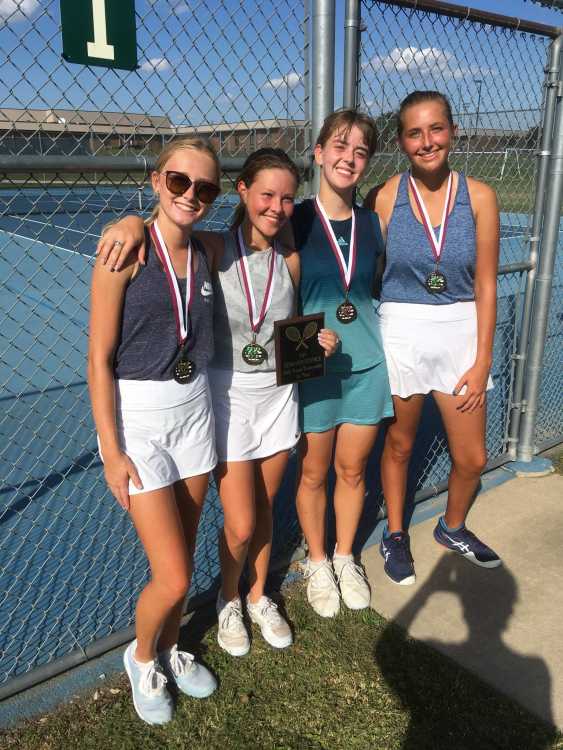 The 2019 girls tennis season was a memorable one in Southeast Missouri, with Cape Girardeau Central (19-3) capturing the Class 2 District 1 championship and Notre Dame (16-3-1) winning the Class 1 District 2 title and advancing to the Final Four, the state championships in Springfield, Mo.

Cape Central and Notre Dame placed four players each on the All-Southeast Missourian Team and Jackson (9-11-1) placed one.

The honorees are as follows:

Part of the first Notre Dame tennis team to go to the state championships (at which the Bulldogs finished fourth), Gullette, a 5-foot-10 sophomore, had a team-best 13-0 singles record.

“It’s hard to look at Megan and think of her as a 10th grader,” said Bulldogs co-coach Donna Ryan. “She is as mature as the rest of the team.”

“I played basketball a lot when I was younger,” said Gullette, “but I’m focused on tennis now because I want to get better and better.”

A trend the Missouri State High School Activities Association is seeing among student-athletes is single-sport specialization.

Megan seems to fit into that category.

“I really love tennis,” said Gullette, the tallest player on the Bulldogs squad. “In the summer, I play every day – sometimes as much as four hours a day.”

“At the beginning of the (tennis) season,” Ryan said, “I said Megan was the player to watch.

“She has lived up to expectations.”

Gullette’s parents do not play tennis, so she is not following in family footsteps.

“I was looking for a fall sport,” Gullette said. “I tried volleyball and I didn’t want to play golf.

Asked to describe her style of play, the 15-year old said she tries never to give up on an opponent’s shot.

Gullette likes science and envisions a possible career in the medical field one day.

College, of course, is still a long way off.

In the meantime, she marvels at the uniqueness of her chosen sport.

“Tennis is more mental than any sport I’ve played,” asserted Gullette. “(In singles), you’re by yourself with lots of time to think.”

Gullette teamed with Claire Southard in doubles play in 2019.

Other members of the team:

A junior, Southard compiled a singles record of 11-0 and teaming with Gullette, had a mark of 26-2 in doubles play.

Bruenderman, a junior, compiled a singles record of 9-2. In doubles play, she was teamed with Anna Grace Stroup.

The Bulldogs’ only senior, the team of Stroup and Bruenderman went 22-6 in doubles in 2019. In singles, Stroup had an 11-2 record.

A freshman, the duo of Maxton and Emily Ford finished in first place in the Class 2 District 1 doubles tourney. Maxton’s doubles team was 20-2 and Megan had a team-best 15-1 record in singles.

Ford, a sophomore, compiled a 14-2 mark in 2019 for a team that posted its best overall record in more than a decade.

The senior went 13-1 in singles and with partner Anita Kellum, was 18-7 in doubles.

Mansell, a senior, joined the Indians as a junior. In her final year in high school. Mansell was the Tribe’s top singles player with a mark of 9-7.