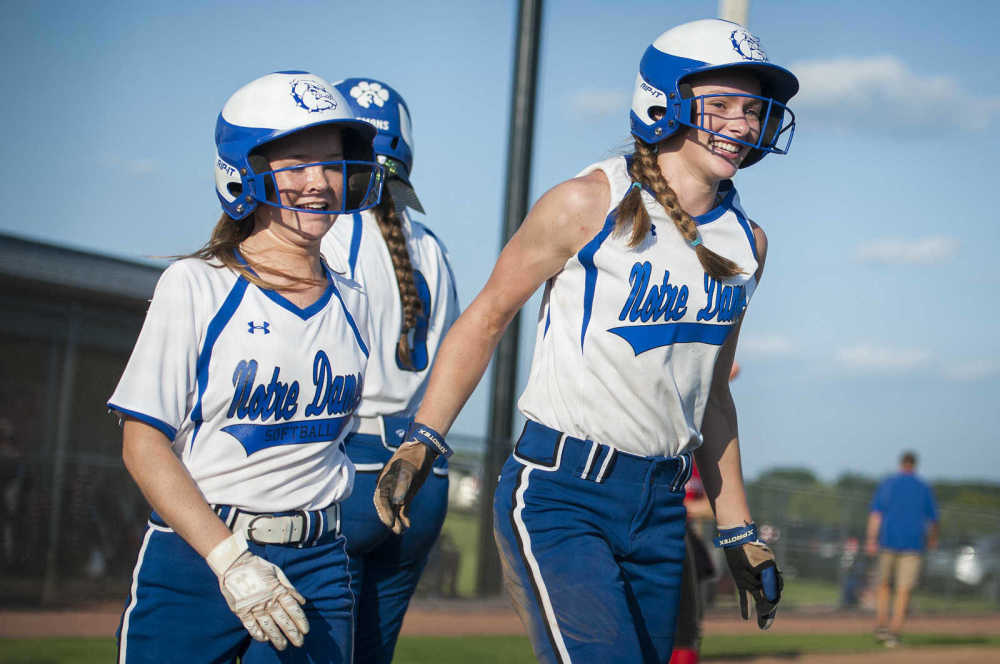 Riley Burger (right) smiles after scoring on a wild throw in a game against visiting Jackson on Sept. 3, 2019. Teammate Caroline Lochmann is at left.
Ben Matthews ~ bmatthews@semissourian.com

Editor's note: Selection to the All-Southeast Missourian Team does not necessarily constitute selection to the Semoball Award finalists for softball.

The 2019 girls softball season was a memorable one in Southeast Missouri, with Notre Dame advancing to the Class 3 quarterfinal game in late October.

The Bulldogs placed three players on the All-Southeast Missourian Team, including player of the year Riley Burger.

Cape Girardeau Central, St. Vincent and Perryville had one representative each. Jackson placed the most girls on the squad with four.

Burger, a 5-foot-7 inch center fielder, is a first team all-state selection. She is one of five seniors on a 27-6 team which made it to the Class 3 quarters before falling to Incarnate Word, 12-7, on Oct. 28. Burger was additionally named all-conference, all-district and all-region. Burger, also one of the first five on Notre Dame’s basketball squad, is headed to the University of Louisville on a track scholarship.

“(Riley) is one of the fastest and best slap hitters ever from our program,” said Jeff Graviett, Bulldogs softball coach.

She stole 42 bases in the 2019 season on as many attempts and in her career was caught just once in 103 SB attempts.

“I got caught as a senior,” Burger said. “When I got back to the dugout, the other girls were surprised – wondering what just happened.”

Burger, a three-year starter for Graviett’s Bulldogs, had a uniform number with a family connection.

The 18-year old wore No. 22 on her jersey in both softball and basketball.

“That was my mom’s number,” said Burger.

Burger’s mother, Karen, was a record-holding hurdler at Kelly High and played basketball and softball at Shawnee Community College.

Burger will specialize in the long jump, triple jump and high jump at Louisville.

Competitive basketball and softball are behind her now.

“It’ll be heartbreaking (not to play those sports),” said Burger.

“I’ve played softball competitively since I was seven,” she added.

Burger’s current plan is to study nursing and return to Southeast Missouri after finishing her undergraduate work.

“Whatever God has planned, I’ll do,” she added.

Other members of the team:

A freshman third baseman, Burnett had a school record 55 RBIs on a .527 batting average. A second team all-state player, Burnett’s 58 hits are the most ever by a right-handed batter in school history.

A junior right-fielder, Heuring hit .551 on the season and was named second team all-state. Her 59 hits is a school record.

A sophomore hurler, Johnson went 13-6 on the mound with a 2.68 earned run average with 117 strikeouts, five shutouts and two no-hitters. She was recognized as second team all-region.

A junior infielder and pitcher, Hotop was first team all-district and led the Lady Indians with two HRs, 11 RBI, a .628 slugging percentage and a 1.025 OPS.

A junior outfielder and pitcher, Simpson was 4-2 on the mount with 24 strikeouts in 39 innings. In the field, Simpson hit .494 with five doubles, seven triples and 20 RBI. She was second team all-state.