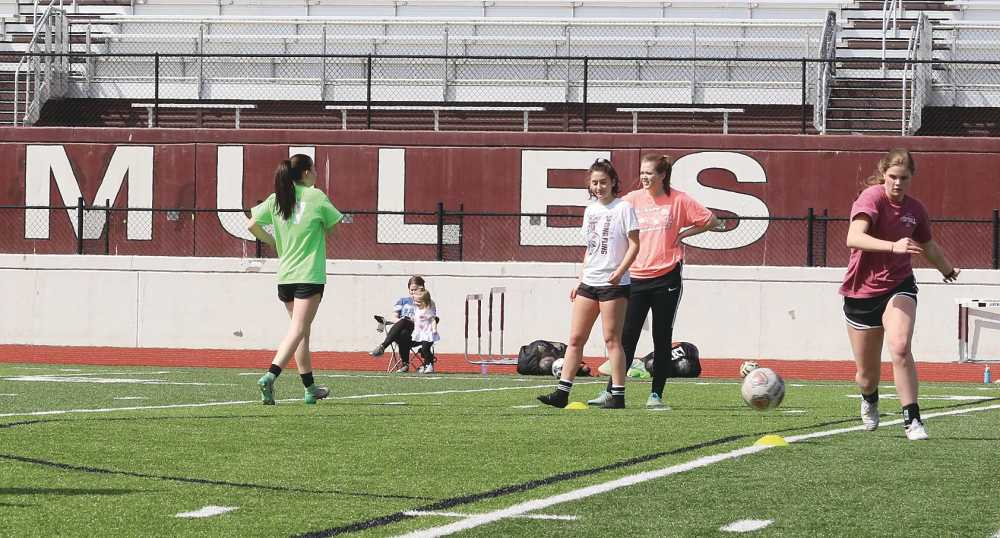 POPLAR BLUFF — A day after MSHSAA essentially put the spring sports season on hold, Poplar Bluff athletes were practicing in hopes that the season is not lost amid concerns over the COVID-19 pandemic.

“I’m kind of nervous because it’s my senior year. I hope that we’ll continue to play. We have practice on Friday and I just hope that’s not my last practice.”

MSHSAA sent an email to schools Monday saying that the spring sports championships are still on schedule for May. However, if a school is closed due to the novel coronavirus, then no practices or games should occur during that time.

Games were scheduled to start Friday but Poplar Bluff joined a growing list of schools around the state and nation, closing through April 3. Since the school was already off this week for spring break, athletes were able to practice.

“Hopefully we can continue to play this season,” Mules soccer coach Rusty Crafton said. “We’re going to prepare. We’re ready to go. I think the girls are anxious to go.”

Poplar Bluff’s baseball team also practiced Tuesday and needs one more practice to reach the required 14 days before the start of contests.

“I want to be prepared just in case something happens,” Poplar Bluff golf coach Billy Pyland said. “Let’s be prepared and not unprepared.”

As long as the course is open, sophomore Alex Wiseman said he will be playing “no matter what.”

Senior Ben Hickey said unlike other sports one does not need a competitor to play a round of golf or work on their game, but added that it’s nice to have competition.

“Whatever happens, we’ll try to be ready for the season,” Hickey said. “If it doesn’t happen at all, then we’ll just get better at golf while we’re at it.”

While they wait, athletes will have to stay in shape by running and working on their own with drills they can do at home.

“As long as it’s any touch on the ball, you could do it against a wall,” Spencer said.

The difficulty, she added, will be getting on the same page as teammates once practice resumes, if it does at all.

Spencer said it does not matter to her if there are fan restrictions, like the ones MSHSAA implemented with the basketball playoffs, of if the season is much shorter or runs into the summer.

“I just really hope we’ll be able to play our season and it won’t be canceled,” Spencer said. “Even if it got postponed. I wouldn’t care coming in late (June). As long as I get to play a couple more games before I go off to college.”

Spencer is one of three seniors on the soccer team. Crafton said he would feel bad for them if they don’t get to play.

MSHSAA announced that the speech, debate and theatre events at the district and state level are canceled, as well as the music festival. MSHSAA is taking a wait-and-see approach to the Scholar Bowl with districts scheduled for April 18.

The Centers for Disease Control and Prevention recommended Sunday that events of 50 people or more be canceled or postponed across the country for the next eight weeks.

The first district playoffs are currently scheduled to start May 4 for golf and those schools that compete in spring softball. Those dates could be delayed, MSSHAA said, along with districts for boys tennis (May 11), baseball (May 15) and girls soccer (May 16). Poplar Bluff is scheduled to host the district meet for track and field on May 16.

The MSHSAA Board of Directors will meet April 3-4 and will discuss waving the bylaw that requires teams compete in at least half the number of contests permitted for each sport.

That could allow for schools to complete a limited schedule to be eligible for the postseason. Each individual school is responsible for creating and contracting its sports schedule while MSHSAA operates the postseason.

Depending on when, or if, schools return, teams will most likely have to put together a new schedule of contests before the district playoffs start.

Many of the places that will host playoff events are at colleges and universities that are also closed, which could also impact the chances of sports returning.

There’s also a limited amount of time before the next school year starts.

MSHSAA’s summer calendar begins on the last day of school or May 22, whichever is earlier, and ends Aug. 2 before the no-contact period preceding the first fall sports practice.

For now, everything is on hold.

“This might be the last official practice we have for awhile,” Hickey said. “But we’re going to try to practice on our own as much as we can.”