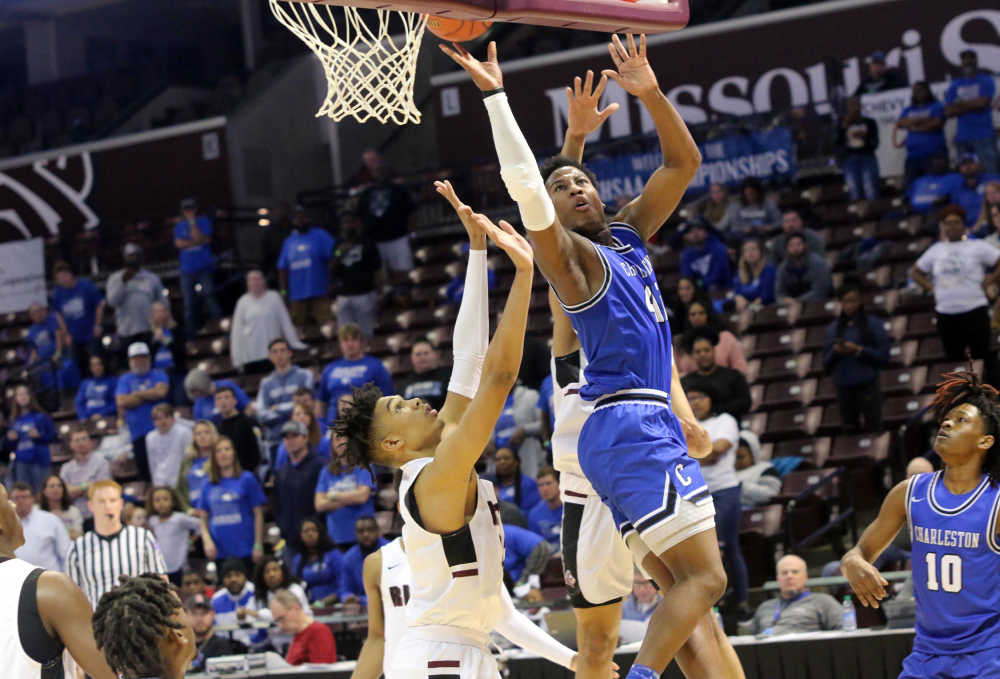 Charleston's Blessin Kimble (45) eyes the basket to score against Cardinal Ritter, during the finals of the Class 3 Show-Me Showdown, at JQH Arena, in Springfield, Mo., on Saturday, March 14, 2020.
Alex Wallner/Standard Democrat

SPRINGFIELD, Mo. — It wasn’t their time.

Charleston’s quest for a 12th state championship was gone in a hurry on Saturday against Cardinal Ritter in the finals of the Show-Me Showdown at JQH Arena in Springfield.

From the second-quarter-on, the No. 2 team in Class 3 never let up on the Bluejays, defeating them 88-32. The score marked the most lopsided win for a team in championship game history in any class.

Trailing by nine after the first quarter, 21-12, the Lions only allowed four points in the second quarter to lead by 29 at halftime, 45-16.

Cardinal Ritter allowed 11.8 percent shooting in the first half, as the Bluejays couldn’t figure out the Lions defense.

“I knew they were good,” said Charleston head coach Danny Farmer on what he was thinking heading into the game. “I knew they were quick. I thought we could play with them, but they got it going, and we didn’t shoot free throws very well. If we could hit some free throws and kept the game close, it may have been a closer game. But, we couldn’t hit free throws; we just didn’t play very well.”

After falling behind 8-0 to start the game, the Bluejays finally cracked the scoreboard, as senior Isaiah Gillespie drove to the basket and drew a foul. He made one of his two free-throw attempts to cut the Lions lead to seven, 8-1 with 5:22 left.

Four quick points, on back-to-back possessions, though, grew the Cardinal Ritter lead to 12-1, before Gillespie provided the first field goal for Charleston, with 4:54 remaining.

A free throw from senior Blessin Kimble then made it 12-4 with 4:33 left, before Cardinal Ritter went on a 5-0 run to push the lead back to double-figures, at 17-4. Senior Glenn Valentine converted a 3-point play, while sophomore Luther Burden Jr. broke the Bluejays defense and slammed a rim-rocking dunk that forced Charleston to call a timeout.

Charleston cut the deficit to eight, 19-11, with 1:06 remaining, after sophomore Evontrez Hill made one of his two free throws, and Kimble added a basket and a pair of shots from the foul line. That Bluejays surge would be the closest they got to Cardinal Ritter the rest of the way.

The athleticism, the skill, and the quickness over-matched whatever Charleston threw at Cardinal Ritter, making it easy for the Lions to break the Bluejays defense and get to the rim at will.

“We say all the time to create for somebody else,” Cardinal Ritter head coach Ryan Johnson said. “Pass up a good shot for a great shot. They just hit all the boxes on what we wanted to do. They hit every box today, and it’s ironic that in the state championship game, they hit every box.”

Of the 21 points scored in the first quarter, 20 came in the paint. Cardinal Ritter had four points off turnovers, four second-chance points, and four fastbreak points as well.

Once the second quarter started, the rout began for the Lions.

From there, the Lions erupted on a 13-0 run to hold a favorable cushion heading into the intermission.

During the second quarter, it wasn’t the starting lineup that ended up carrying the Lions. Instead, it was the bench.

Even after halftime, it didn’t get much better.

Cardinal Ritter outscored Charleston 37-7 in the third frame to lead 82-33, heading into the fourth.

Cardinal Ritter is now tied for fourth — with New Haven — in the state with eight championships. Scott County Central leads the state with 18, while Charleston and Vashon are in a tie for second with 11.

Burden Jr. led the game with 18 points. He was 9 of 10 from the floor to go along with three assists and two steals in 14 minutes.

Junior Mario Fleming had 16 points on 8 of 11 shooting. He added five rebounds in 11 minutes.

Valentine and senior Caleb Wilkerson were the other two Lions to reach double-figures, with 11. Valentine went 3 of 10 from the floor, two rebounds, and three assists, while Wilkerson shot 5 of 7 in 15 minutes.

No Bluejays reached double-figures in scoring.

Kimble led the team with nine points on 3 of 8 shooting. He neared a double-double with nine rebounds in 20 minutes.

Gillespie had five points, on 1 of 8 shooting, with five rebounds.

After the game, Kimble, Bledsoe, and Bogan all joined Farmer to address the media.

All three gave emotional responses centered around the message of becoming closer together over four years.

“We came in, since day one, working hard,” Bogan said. “We grew closer as friends and brothers. I love them all.”