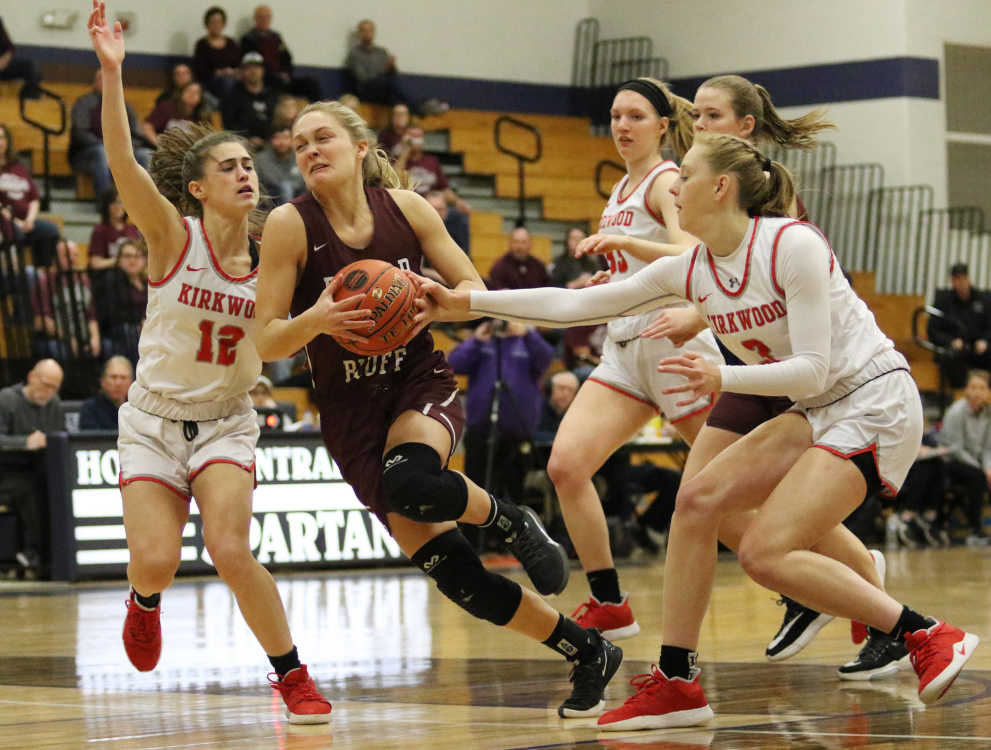 ST. CHARLES, Mo. Ś They knew what was coming.

In the locker room at halftime with a one-point lead, the Poplar Bluff girls basketball team knew they were going to have a fight ahead of them.

"We knew they were going to come out and turn it up," Poplar Bluff senior Abby Turner said. "We were ready for something to change.

"We were expecting it."

Kirkwood scored nine straight points to start the second half and the Mules never recovered Saturday in the MSHSAA Class 5 quarterfinal.

Poplar Bluff went scoreless for 3 minutes and 45 seconds as Kirkwood surged ahead to win 44-33 at Francis Howell Central High School.

"We started really strong first half and I think they just went to the locker room and came back out and hammered us," Poplar Bluff's Kiley Bess said.

The Pioneers (24-4) advanced to the MSHSAA Show-Me Showdown for the third time in four years.

It was the final game for seniors Bess, Turner, Katie Pattillo, KeKe Hardaway and Hannah Bass.

It also turned out to be the final day of basketball in Missouri.

MSHSAA announced Monday that the Show-Me Showdown for Classes 4 and 5 were being cancelled amid concerns over the COVID-19 pandemic. Saturday's quarterfinal was closed to the public with each team allowed to have 60 people in the gym.

"It's bittersweet," said Katie Pattillo. "We had a great season. I'm so proud of every single one of them. We've all gotten better and grown closer together tho season. It's been really good."

Things looked good early for the Mules who built a six-point lead early in the second quarter.

But they only got one more field goal and a free throw over the final 7:18 of the half and the offensive struggles continued after the break.

"Our Achillies is our offensive execution at times," Coach Pattillo said.

It was the sixth time this season the Mules didn't score more than 35 in a game and they didn't win the first five.

Bess scored 18 points on 7 of 17 shooting and got to the foul line for only five attempts. The program's all-time career leader in points finished with 2,301 when she set the final score with a pull-up jumper in the closing seconds.

"I think we knew where she was going to go, but I mean she is still freaking unstoppable," Kirkwood coach Monica Tritz said of Bess.

Katie Pattillo and Emma Johnson each scored six points while Sierra Sievers had three for the Mules, who shot 30% from the field.

Kirkwood's Natalie Bruns scored all but two of her 20 points in the second half. The 6-foot senior also had 11 rebounds.

"We did such a good job on her early and we had a little bit of a letdown there," Coach Pattillo said. "We didn't get back to her and let her loose. Our gameplan was to try to take her away as much as possible. We got caught a couple of times and didn't get our help there."

The teams traded baskets and the lead early. Bess and Johnson sank consecutive 3s, sandwiching with a steal by Turner for a 10-6 advantage.

Poplar Bluff led 13-10 after one quarter and by six after Bess splashed in a 3-pointer early in the second. But the Mules didn't get another field goal until Bess scored in the final seconds of the half and her foul shot at the 2:48 mark was the only point in the meantime.

Kirkwood scored eight straight to pull ahead but Bess put the Mules up 19-18 at halftime.

"Bluff is good," Tritz said. "They're tough. They're strong."

The Pioneers were patient to start the second half and got an offensive rebound that led to a 3-pointer by Kate Jozwiakowski for the lead at the 6:30 mark.

A tipped pass in the paint led to a steal for Kirkwood and Tara Behnam scored in transition. Jozwiakowski got a steal and Bruns scored off a lob pass before another steal by Rylee Mulvaney led to Bruns scoring for a 27-19 lead.

"I think they kind of relaxed a little bit," Tritz said of her team. "Even though our seniors have been here before, as they pointed out, they didn't actually get on the floor. So I think they were pretty tight at the beginning."

Bess cut the deficit to 29-24 but the Mules missed a chance to get closer. Bruns scored then got to the foul line after Poplar Bluff missed a 3-pointer.

Kirkwood took a 33-25 lead into the fourth and led by 10 with 6:21 remaining when Bruns sank two foul shots after an offensive rebound.

The Pioneers had 12 offensive rebounds and seven second-chance points while finishing with a plus-9 rebounding advantage.

Tritz said rebounding has been one of her team's weaknesses. Behnam, a 5-11 sophomore, had seven of her nine rebounds in the first half while Bruns had eight in the second half alone.

"That killed us," Coach Pattillo said.

"I think our guards did a good job," Tritz said. "It was a complete team effort."

Poplar Bluff didn't score over the first five minutes of the fourth quarter over six possessions. Pattillo's three-point play at the 1:58 mark ended the drought and the Mules trail 39-28.

The Pioneers broke Poplar Bluff's press then sank 3 of 7 foul shots the rest of the way.

"Our gameplan was what we wanted, we just couldn't finish it," Coach Pattillo said.

Poplar Bluff's 19 wins were the most since a 21-7 season in 2011, also the last time the Mules appeared in the state playoffs.

That was also the last time Poplar Bluff went unbeaten in SEMO Conference play. The Mules won the program's 13th conference title by beating Notre Dame 50-47 in a winner-take-all meeting to end the regular season.

The Mules won the program's 15th district title with a 49-44 win over Jackson after the teams split two meetings in the regular season.

This was the first district title for the girls under Coach Pattillo, who won two state championships and four district titles as Poplar Bluff's boys coach. His Marquette teams also made two playoff appearances.

Poplar Bluff's seniors played for the district title in each of their four years and won a combined 59 games.

The Mules last advanced to the Show-Me Showdown in 2002.

"I would have never guessed us making it this far," Bess said. "I'm just happy for the experience. I've had a blast this year. Great way to end our senior year on a good run."