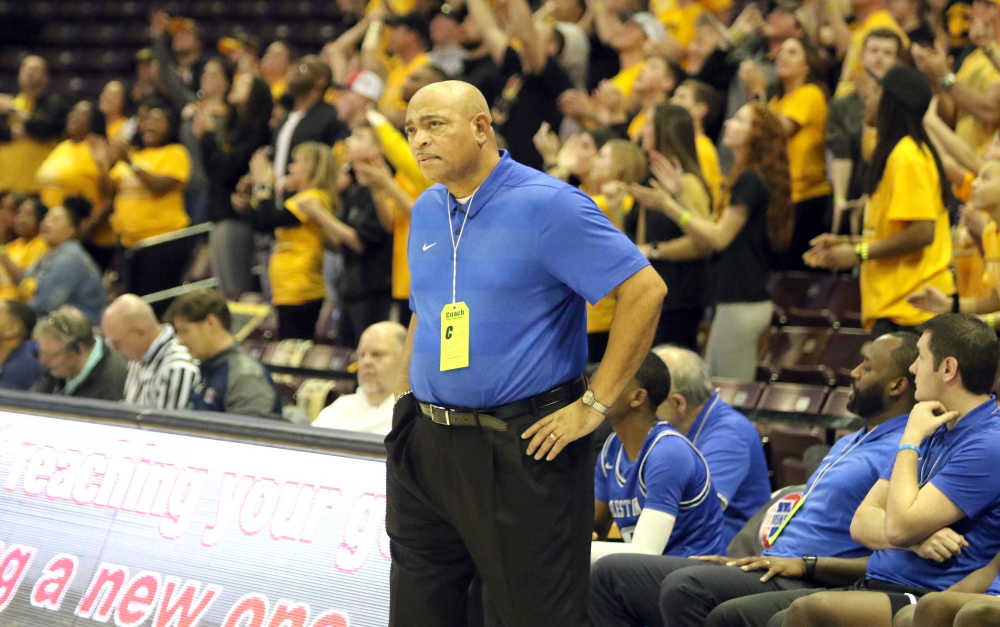 Charleston head coach Danny Farmer looks up at the scoreboard in the final moments of the Bluejays' 51-49 win over Monroe City in a Class 3 semifinal game Friday, March 13, 2020, at the John Q Hammons Arena in Springfield, Mo.
David Jenkins/Standard Democrat

Farmer said that he told his team at the beginning of the season. He finished his career with the Bluejays with a 486-178 record — good for a 73 percent winning percentage.

Charleston has secured a 20-plus win season in five-straight years, and nine of the last 10. The Bluejays have reached the Show-Me Showdown 10 times under Farmer's tutelage as well.

Looking to win the program's 12th state championship on Saturday, the Bluejays fell to Cardinal Ritter 88-32 to earn second-place. Charleston finished with a record of 28-5.

Finishing his career with a senior class of Terridean Bogan, Sam Bledsoe, Brian Visor, Tyrell Ware, Suave Fitzpatrick, Isaiah Gillespie, and Blessin Kimble, the group compiled a 98-31 — a 75 percent winning percentage. The group also managed to win four-straight district championships and made four trips to the Show-Me Showdown — three consecutive — earning a pair of second-place finishes (2018, 2020), and a third-place finish (2019) in the process.

"Very successful," said Farmer about his senior class. "They worked hard, and they always worked to get here and to be the best. You can't ask anymore. When you're coaching and have kids that will work hard for you and give their best — I can't ask for anymore. We went through ups-and-downs together, and we will always go through ups-and-downs together; that's just part of it.

"I love them, and I have a good time with them. It's great, and a good group for me to go out with."

Occasionally, coaches who retire never get tired of the position and come back during certain circumstances.

However, Farmer joked after the game and said that this was the time for him to step down.