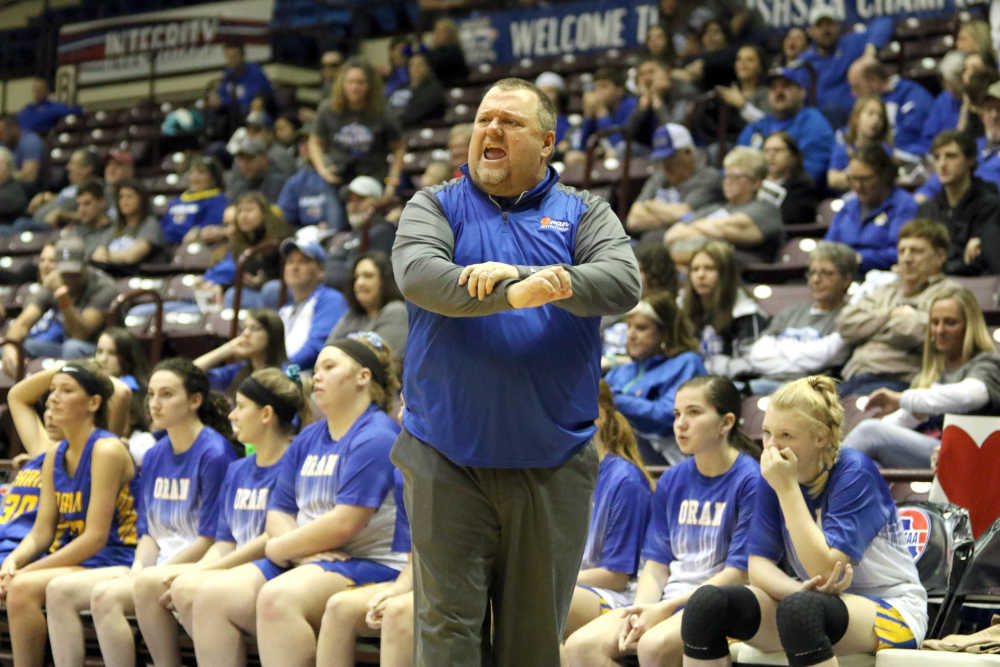 SPRINGFIELD – Every coach competing in the MSHSAA Boy’s and Girl’s Basketball Semifinals Friday at Missouri State University was pleased to still be playing well enough that their season was continuing, and interim Oran coach Larry Boshell was no different.

He replaced Ethan Evans in the middle of this season and found the experience to be one of mixed emotions, initially.

“At first,” Boshell said following his team’s loss to East Buchanan Friday, “I was like ‘Oh no.’ But honestly, I would rather coach the girls on the basketball floor as far as effort. They will run through a wall for you. And I think they appreciate it more.”

Boshell has coached both girls and boys throughout his career and he enjoyed this season.

Asked what next year held for the program and Boshell was non-committal at this point.

Like Eagle boy’s coach Joe Shoemaker, Boshell is a graduate of Oran and he said there are reasons that people stick around the Scott County community.

“We know everybody,” Boshell said of the Oran community. “And a lot of the community actually went to Oran and ended up back in Oran. It’s just a nice community. It’s a good place to raise kids and the athletics right now are pretty sweet.”

East Buchanan unveiled a 6-foot-1 freshman in Gracie Kelsey, whose talent belied her years of experience.

She made 10 of 14 shots and finished with a game-high 26 points and eight rebounds.

“I think she was better than what we saw in tape,” Boshell said. “She made some good moves.”

East Buchanan pulled away quickly in the game and continually fed the ball in the post.

Boshell called a couple of first-half timeouts to try and adjust, but those alterations in strategy worked only on a temporary basis.

“She was a good player,” Oran junior center Katie Webb said. “She was very athletic.”