SHOW-ME SHOWDOWN: Charleston gets tested, holds on for 51-49 win over Monroe City 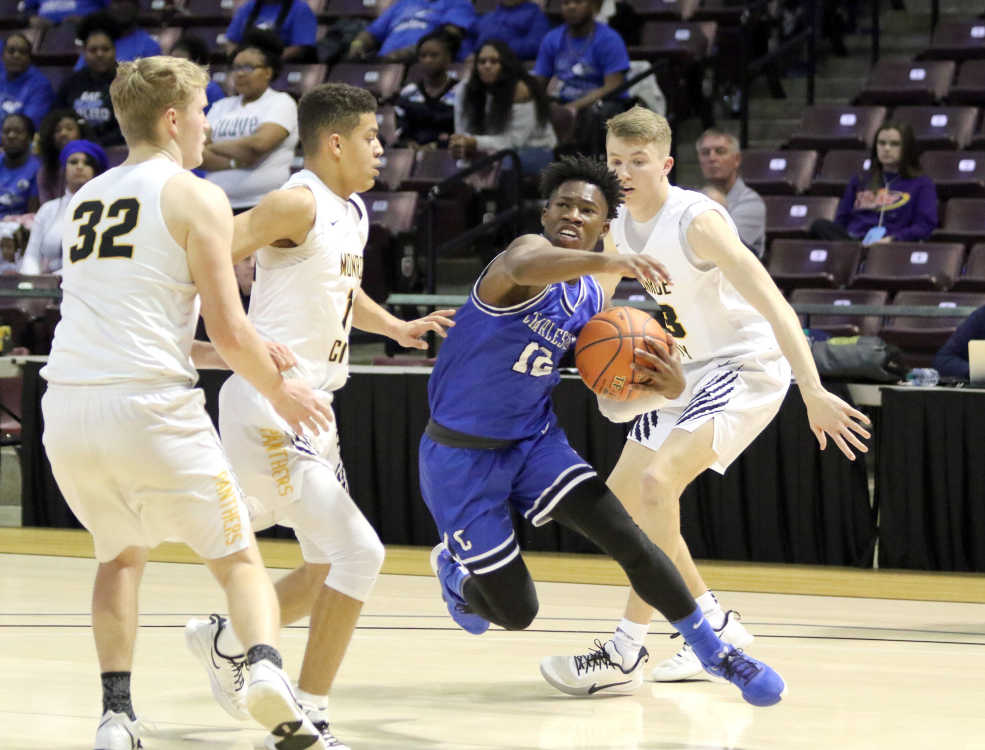 The Bluejays trailed 22-20 at halftime, but still clawed their way to a 51-49 win against Monroe City, in the semifinals of the Class 3 Show-Me Showdown at JQH Arena in Springfield.

“We had to keep matching their toughness,” said Charleston head coach Danny Farmer on what he told his team during halftime. “And we were down because we were missing easy shots. We played great defense, we just missed easy shots, missed free throws, but then, in the end, we made the free throws when it counted. We’re going to have to play smarter at the end of the game.”

Coming out of the break, Charleston tied the game within the contest’s first 20 seconds after freshman Rico Coleman received an excellent outlet pass from senior Sam Bledsoe that he finished off for a layup.

A back-and-forth game at first, the Panthers regained the lead, with 6:49 left, after Joshua Talton got into the lane, shot faked his defender, and made his layup to make it 24-22.

Senior Brian Visor got his layup to go, after another excellent pass from Bledsoe, to tie the game with 6:33 left.

Senior Blessin Kimble made a tough, one-handed jumper to cut the deficit to one, and then added onto that with a layup to give Charleston the lead.

Not going away, Monroe City took the lead, again, with 3:38 left, but Charleston always seemed to provide an answer.

With 3:28 left, Kimble Euro-stepped to the basket, missed his first layup attempt but would rebound the shot and draw a foul while taking it up. He would make 1 of his 2 attempts from the charity stripe to tie the game at 29.

After that brief surge from the Bluejays, the Panthers responded and took the lead, 32-29, on a 3-pointer from Ethan Lehenbauer with 1:40 left.

Sophomore Evontrez Hill would answer with a 3-pointer of his own to tie the game, with 39 seconds left, while Kimble finished off a layup after a Panthers’ player attempted to draw a charge, to give the Bluejays a 34-32 lead with 45 seconds remaining.

With one last attempt to try and tie or give his team the lead, Lehenbauer got the ball in the left corner. His 3-pointer went off-the-mark, though, keeping the score 34-32 heading into the final period.

Starting off the final eight minutes, the Bluejays had a scare.

Senior Isaiah Gillespie drove to the basket and attempted a layup, but fell hard while going up for his shot, and was helped off the court by medical staff at JQH Arena. He did not return to finish the game.

Senior Terridean Bogan replaced Gillespie at the free-throw line and made both of his attempts, to give Charleston a 36-32 lead.

Following that, Coleman got a put-back layup, to make it 41-34 with 5:39 left, and forcing a Monroe City timeout.

One minute later, the Panthers made it a five-point game, 41-36, after Stark drove to the middle of the lane and made a short jumper.

The freshman added another basket 30 seconds later to push the lead up to eight, 45-36, before Lehenbauer’s 3-pointer from the right corner — off a missed dunk by Kimble — made it 45-39 and forced the Bluejays to call a timeout.

Hill would then score the next five points for the Bluejays. He went 3 of 4 at the foul line during that stretch, while adding a layup, where he reversed hands, to make it 50-41 with 55 seconds left.

Charleston built it’s lead up to double-digits, 49-39, the only time in the game that happened.

Despite the shooting woes, Bledsoe said that he felt his team starting to get into a groove once they

“We started worrying about defense and just making the easy shots,” Bledsoe said. “Worrying about getting the layups, so the 3s and the open, mid-range shots came to us. I don’t know if we hit very many, but I know that they came more natural to us, we weren’t forcing them.”

Coleman led the team with 15 points on 7 of 10 shooting. He added two rebounds and one steal in 24 minutes, leaving his head coach with nothing to say but praise.

“We’ve been working him and trying to get him to this point to where he can come in and help us,” Farmer said. “He’s going to be a good player someday, and we realized that.”

Kimble was the other Bluejay to reach double-digits, with 11.

He shot 4 of 8 from the floor, with eight rebounds, one assist, and one steal and said that he was doing what he normally does; there was nothing spectacular.

Talton led all scorers with 16 points. He shot 4 of 7 from the floor — 8 of 10 from the foul line — with four rebounds, two assists, and one blocked shot.

After the game, Monroe City head coach Brock Edris said he couldn’t be happier with how his team played.

“Super proud of our guys,” Edris said. “Our entire team, what they accomplished this season. To go 28-3, make it to the final four for the first time in 25 years. I felt like this group of guys really made our community proud, battled each day, and competed at practice. They did everything we asked as a coaching group.

“We’re going to miss our seniors.”