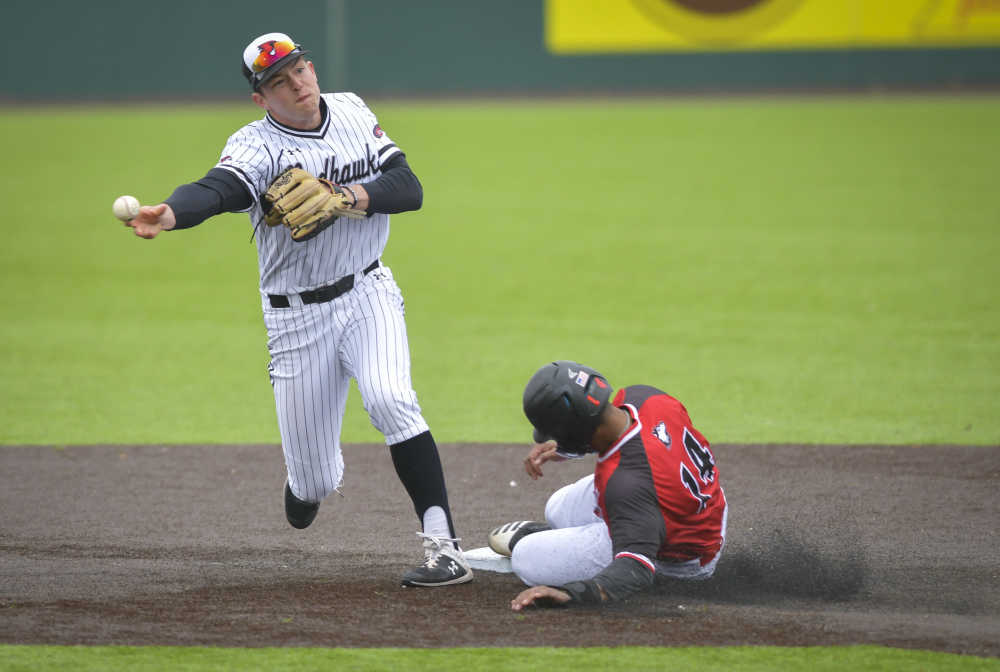 After stepping on second base for one out, Southeast Missouri State infielder Tyler Wilber (9) slings the ball to first base to convert a double play in the top of the third inning of a game against Northern Illinois last month at Capaha Field.
Ben Matthews ~ Southeast Missourian
Order this photo

The only thing spreading more rapidly than the COVID-19 public health threat Thursday was the sporting events and leagues that were ceasing operations for the time being.

Southeast Missouri State was not immune to those decisions, as the Ohio Valley Conference curtailed all athletic-related events indefinitely.

“The Ohio Valley Conference Board of Presidents have announced that effective immediately OVC member institutions will suspend athletic-related activities including all competition, and formal practices until further notice due to the COVID-19 public health threat,” the league stated in a release. “All recruiting-related travel is also suspended until April 3, at which time the impact of that ban will be evaluated.”

The decision impacted the Redhawk teams in gymnastics, track and field, softball, tennis, baseball, and football.

Each of those programs will cease operations until further notice.

“It’s a really sad day for our student-athletes and our coaches and staff,” Southeast athletic director Brady Barke said. “You hate for it to ever get to a point like this, where our student-athletes are not given the opportunity to be able to compete. But certainly, their health and safety and well-being are always going to remain the top priority.”

The repercussions were immediate, as the Southeast gymnastic squad was going to hold its “Senior Day” festivities at Houck Fieldhouse today, while the Redhawk softball program is currently in Tampa, Fla. competing in a tournament at the University of South Florida.

The Southeast baseball program was scheduled to hold a three-game series with SIUE beginning today at Capaha Field, while the tennis program was supposed to visit UT Martin today for an OVC match.

“When things have escalated to the point where we feel like this is in their best interest,” Barke continued, “and everyone’s best interest, you have to sometimes make decisions that impact their participation.

“That is where we are at right now.”

Though it is not “in-season,” the cancellation of Redhawk spring football has a seismic impact on the training and preparation for the 2020 season.

The Southeast coaches rely heavily on the 15 training sessions (the final one being the spring game) to not only instruct with their players but to evaluate them and how the depth chart for next fall will unfold, as well.

Barke said it is possible that a number of the impacted spring sport athletes could apply for redshirt seasons, but that becomes problematic because a lot of the scholarship dollars have been pledged to incoming prospects for next year.

“I would not be surprised if something like (redshirting) happened,” Barke said. “But the trickle effect is pretty significant. With seniors, you are anticipating them graduating and you’ve likely signed (recruits).

“You would not only have equivalency issues, but also financial issues in that we have awarded that money to two people. We don’t now just have extra money.”

Barke broke the news to his coaches in an afternoon meeting in what he referred to as a “historic day.”

Neither he nor anyone else in collegiate athletics has ever experienced anything like what has transpired over the past few days.

“The coaches are disappointed for themselves,” Barke said, “but certainly for their student-athletes, particularly for their seniors.

“There are emotions all over the place.”