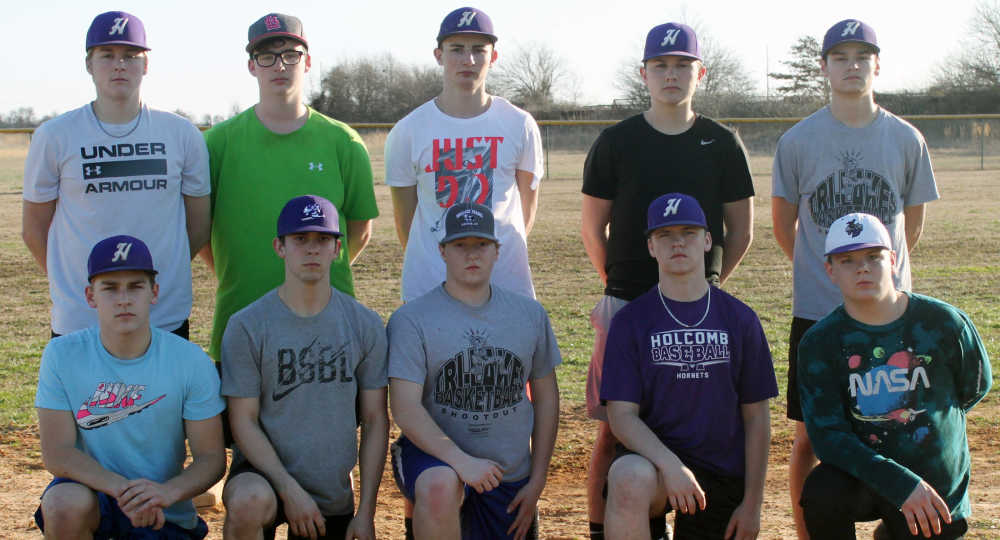 The Holcomb Hornets baseball program enters its spring season looking to build upon a 13-5 fall campaign.

“We had a pretty decent fall,” said longtime baseball coach Darrin Shipman, who took over the Holcomb program at the start of the 2019-20 school year. “But we also know we have a lot of growing up to do because our schedule is tougher in the spring. We play some bigger schools that had football in the fall so we will have to be that much better if we are going to compete with the bigger schools.”

Holcomb has one senior, five juniors, four sophomores, and five freshmen on its 15-man roster.

“We have some building blocks with some younger guys but our upperclassmen are going to have to lead us,” Shipman said. “Our upperclassmen have played a lot of baseball so we need them to display good leadership.”

Eli Morgan is the only senior on the squad.

“Eli Morgan will play some at third base, centerfield, and he will be one of our middle of the rotation pitchers,” Shipman said. “He will be a great senior leader for us.”

The juniors on the roster are Eli Bader, Jimmie Davis, Austin Wallace, and Ben Maynard.

“Eli Bader will play first base and is a left-handed pitcher for us,” Shipman said. “He will probably hit fourth or fifth in the lineup.

“Jimmie Davis will be our No. 2 or No. 3 pitchers. He can also catch and play third,” Shipman continued. “Austin Wallace will probably play some outfield for us and hit sixth or seventh in the lineup. Ben Maynard is also in the mix for outfield playing time.”

Sophomore Nate Rhew is projected to anchor the pitching staff and provide significant offensive contributions after enjoying a big fall.

“Nate is probably our best pitcher and led us in hitting in the fall,” Shipman said. “He did a good job pitching and batted third or fourth in the fall.”

Sophomores Zander Burke and C.A. Heuring are also candidates to get playing time on the diamond.

“Zander Burke will play some infield for us at second base and third base and probably hit second,” Shipman said. “He’s a left-handed hitter with good speed that can bunt.

“C.A. will get some time in center and left field for us,” Shipman continued. “He will probably bat in the range sixth or seventh in the lineup and be a good defensive outfielder for us.”

Shipman believes freshmen Payton McNabb and Hunter Lawrence may also be ready to contribute some at the varsity level.

“We’ve got a good mix,” he said. “They should be ready to contribute some at a young age and be able to grow into being leaders later on.”

Holcomb, which placed second in the Tri-County Conference Tournament in the fall, does not have a regular-season tournament on its schedule in the spring.

“Right now we are not in a tournament but we are playing a lot of bigger schools like Malden, Charleston, Saxony Lutheran, Doniphan, and Portageville,” Shipman said. “We also play some really good Ozark Foothills teams like Neelyville and East Carter County. We’ve got some good teams on our schedule and like I tell our guys it’s much tougher to win in the spring than the fall. We beat some good teams in the fall but the spring will be a great challenge for us.”