Southeast Redhawks women to play in an empty arena in next week's NCAA tournament, rules the NCAA 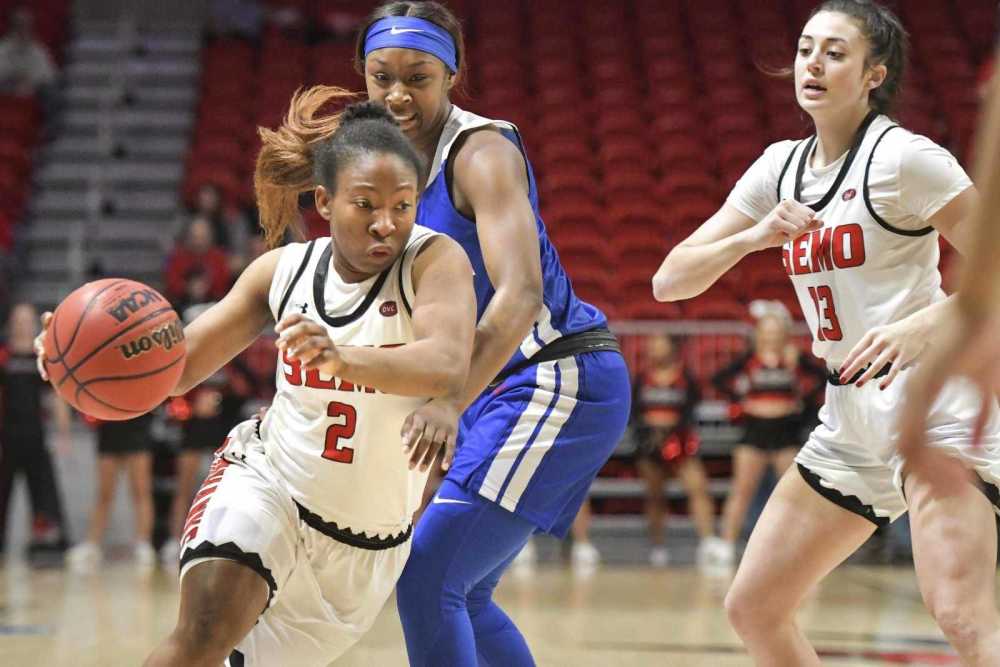 Southeast's Carrie Shephard (2) drives to the basket during a game against Tennessee State Saturday, Jan. 11, 2020, at the Show Me Center in Cape Girardeau.
Tyler Graef ~ Southeast Missourian
Order this photo

Southeast Missouri State’s athletics department is awaiting further word from the National Collegiate Athletics Association (NCAA) about what exactly the governing board’s ruling on Wednesday means for the NCAA-bound Redhawks.

NCAA president Mark Emmert, in a statement, said the upcoming men’s and women’s basketball tournament will be played next week before largely empty arenas – due to fears about the spread of COVID-19, the coronavirus.

The Redhawks women became an automatic qualifier for the tourney due to winning the Ohio Valley Conference tournament in Evansville, Indiana Saturday – a 67-47 victory over No. 1-seed UT-Martin.

No fans, said Emmert, will be permitted in the stands except for “essential staff and limited family attendance.”

“From a staff perspective, we assume (at minimum) that game personnel and administrators will be permitted,” added Honza.

The Big Ten Conference, whose members include Ohio State, Indiana and Michigan, announced when it came to family, only “immediate family” would be allowed to attend competitions in all sports, including basketball.

“We hope we can play in front of our families,” Redhawks co-captain and redshirt senior Carrie Shephard told Semoball.com this morning.

“As a sports fan, this (NCAA decision) is disappointing,” said Honza, “but we understand.

“The health and welfare of everybody is obviously top priority,” Honza added, “and we still expect (the Tournament) will be a good experience for our student-athletes.”

For Southeast’s other sports, everything is “status quo,” said Honza.

“Our baseball team is playing Wednesday night at SIU-Carbondale and our softball team will be playing this weekend in south Florida,” Honza added.

Southeast’s “ESPN selection party” for the women Redhawks will be held Monday evening at Dogwood Social House in Cape.

The date, opponent and venue for Southeast will be revealed at that time.

The tournament is colloquially referred to as “March Madness” and is a major money maker for the NCAA.

The 2019 men’s tourney is estimated to have generated $867.5 million in television and marketing rights alone, according to reports.

Play for the men begins with the “first four” March 17 in Dayton, Ohio.

The following is the full text of the statement released Wednesday by the NCAA’s Emmert:

"The NCAA continues to assess the impact of COVID-19 in consultation with public health officials and our COVID-19 advisory panel. Based on their advice and my discussions with the NCAA Board of Governors, I have made the decision to conduct our upcoming championship events, including the Division I men’s and women’s basketball tournaments, with only essential staff and limited family attendance.

"While I understand how disappointing this is for all fans of our sports, my decision is based on the current understanding of how COVID-19 is progressing in the United States. This decision is in the best interest of public health, including that of coaches, administrators, fans and, most importantly, our student-athletes.”