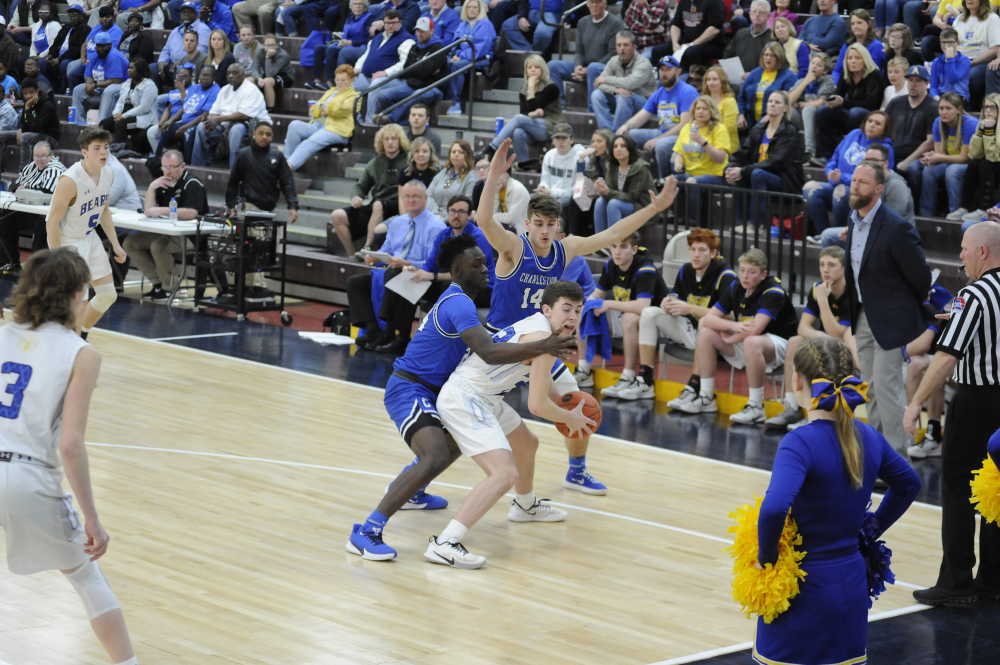 FARMINGTON — As the Ava boy’s basketball team discovered very early in its MSHSAA Class 3 Quarterfinal loss to Charleston Saturday, it’s difficult to scout – or prepare for – the Bluejays.

It must be awful to have to deal with Charleston.

Following a possession on that end – mostly followed by inbounding the ball following a Bluejay make – Gillespie, Brian Visor, and Bledsoe form a net of defenders just awaiting the opportunity to trap the unlucky recipient who catches the inbound pass.

“Once our defense starts turning things over,” Bogan explained, “then teams start panicking in the third and fourth quarters.”

The Charleston defense wears its opposition down mentally as much as it does physically.

The Bluejays led Ava 21-7 after eight minutes on Saturday and scored 46 points, a lot courtesy of their defensive pressure, following halftime.

“It wears them out,” Bogan said, “that is when our offense comes out.”

Charleston turned Ava over 14 times in the victory.

The Bluejays have won 27 of 31 games this year and done so – at times – without Kimble being the dominant physical presence that he can be every single night.

When you have skilled athletes all over the floor, there are times Kimble, even as physically strong and athletic as he is, can get lost amid the talent.

That was not the case Saturday.

“He was really aggressive,” Farmer said of his center. “This is a game before the Final Four, so I expect him to really bring it.”

Kimble posted strong and called for the ball on a lot of early possessions, as he tried to establish his presence early.

Kimble said the games each week are becoming “harder,” so his aggressiveness, particularly at the offensive end, is beginning to show.

“The games are getting harder because everybody wants it just like we do,” Kimble said.

Charleston will face Monroe City (28-2) Friday at 6:20 p.m. in the Class 3 semifinals. It will be the third straight season that Kimble and six other Bluejay seniors (Bledsoe, Bogan, Suave Fitzpatrick, Gillespie, Visor, and Tyrell Ware) will be making the trip.

As sophomores, Charleston lost in the state championship game 63-58 to Hogan Prep Academy Charter, while last year the Bluejays fell in the semifinal 70-47 to Vashon, before taking third place with a 71-58 win over St. Paul Lutheran (Concordia).

Kimble still admitted to being “a little nervous” prior to the quarterfinal, but Bogan wasn’t showing any anxiety when asked to discuss this coming weekend.