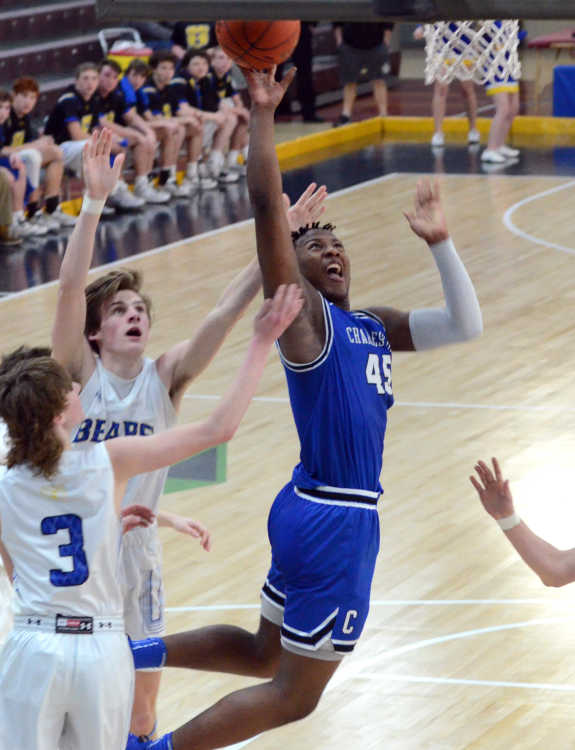 Charleston senior Blessin Kimble puts up a shot while surrounded by Ava defenders Saturday afternoon, March 7, 2020, in the quarterfinals of the Class 3 State Tournament, at the Farmington Civic Center, in Farmington, Mo.
Brent Shipman/Standard Democrat

FARMINGTON, Mo – With a senior-heavy roster full of returning starters, the Charleston Bluejays entered the season with the same goal as every other year in recent memory: reach the final four and compete for a state title.

Despite struggling most of Saturday afternoon offensively against Ava in the Class 3 quarterfinals, the Bluejays third-straight trip to Springfield never felt in doubt.

Blessin Kimble’s 17 points led Charleston in a contest where the Bluejays led from the opening minute on en route to a convincing 76-59 final. Kimble reached 1,000 points in his career as well.

“It’s unbelievable,” Charleston head coach Danny Farmer said. “The feeling is hard to explain. This is our third time in a row going up there. You set your goals at the beginning of the season, you get there, and you accomplish that. It’s just amazing.

“We play throughout the season and talk about it. Our expectation is to be in Springfield. Mission accomplished.”

Despite opening the game shooting just 3 of 10 from the floor, the Bluejays (27-4) had Ava on their heels from the get-go.

Unable to adjust to Charleston’s pressure, the Bears (24-6) turned the ball over 11 times in the first quarter alone, struggling several times to move the ball past mid-court.

After opening the game on a 5-3 run, the Bluejays scored nine-straight points and entered the second quarter with a 21-7 advantage.

Ava’s deficit grew to 16-points late in the second half before a 6-1 rally kept them within striking distance, entering the locker room trailing 33-22.

“For us, defense is what wins games,” Farmer said. “We shoot it well sometimes, but shooting is going to be inconsistent, so we have to put the emphasis on defense and pressure.

“We feel in the end our pressure can wear them down if you’re not deep, and I don’t think they were as deep.”

A quick bucket by the Bears to open the third quarter had Ava’s deficit back into the single digits, 33-24, only to see the Bluejays start to pull away for good soon after.

A traditional 3-pointer from Sam Bledsoe started an 18-5 run by Charleston.

With a 26-point lead and only 5:32 left in the game, the Bluejays started to sub liberally, allowing their starters to exit early to a warm reception from fans and the bench.

“We separated a little bit in the third,” Farmer said. “At halftime, we talked about making some separation, and after we separated, we were going to make them work.

“We were going to slow the game down a little bit and make them come out and play some defense.”

On his way to a team-high 17 points, Kimble was an extremely efficient 8 of 11 (73 percent) from the floor. His 10 rebounds left him with a double-double, and he added three steals to the Bluejay’s cause.

Bledsoe and Terridean Bogan scored 16 and 12 points each.

Bogan also grabbed seven boards to go with five assists and four steals. Bledsoe had four rebounds and a pair of steals.

Charleston struggles especially from deep, going 3 of 14 (21 percent) beyond the arc.

For Ava, Andrew Dalton led the way with a game-high 28 points. Nate Swofford’s 11 points were good for second on the team.

“They traveled a lot with it because they’re not accustomed to moving fast,” Farmer said of Ava’s struggles. “That’s our game. We play fast all the time. They don’t play our style in their area.

“We’re going to play the whole court, the whole game.”