BACK-TO-BACK: Oran makes it back-to-back trips to the state semifinals after 45-39 win over Thayer 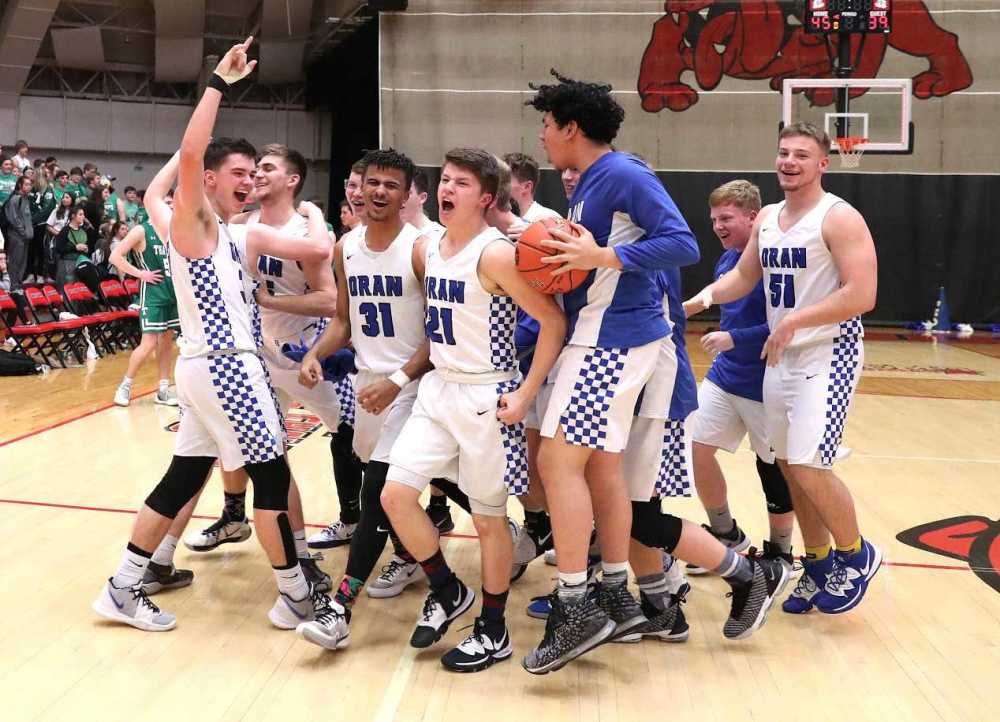 The Oran boys' basketball team celebrates after defeating Thayer, in the quarterfinals of the Class 2 State Tournament, on Saturday, March 7, 2020, at the Sikeston Field House.
Liza King/Standard Democrat

SIKESTON — Storming the floor is something that the Oran Eagles have done a lot in the past four years.

Just as the Oran girls basketball team celebrated on Saturday, the boys followed suit, after defeating Thayer 45-39, in the quarterfinals of the Class 2 State Tournament, at the Sikeston Field House.

The win advanced Oran to the state semifinals for the second-straight year, and third in the last four years.

“It means a lot for our kids,” Oran head coach Joe Shoemaker said. “Each team is different, and I give our kids credit, they battled a very well-coached, quality team. They’re young, so they’re going to give people fits in the future. We got down a little bit, just never gave up. We kept battling, hit some free-throws late.

“We did a pretty good job late, defensively, to try and take away we wanted I felt like. I was very proud of our kids for that. To go with the girls at the same time is always special. I hope the kids enjoy this and make great memories.”

It wasn’t the easiest battle for the Eagles on Saturday, as Thayer competed with Oran for the entire game.

Leading by three, 21-18, at halftime, Thayer came out of the locker room, and within the opening minute, built it’s lead nearly to double-figures.

The play of sophomore Jordan Andrews hurt the Eagles early into the third quarter.

Andrews scored the first — and only — points of the frame for the Bobcats. A pull-up jumper from the right elbow started the third quarter, making it 23-18.

However, Andrews didn't stop there.

With 7:03 left, Andrews attacked the basket and got his shot to fall while drawing a foul to set up the conventional three-point play. He made his free throw, to push the Bobcats ahead by eight, 26-18, but that was all the offense that Thayer could muster.

Oran pitched a shut-out after Andrews’ and-one, and took a 28-26 lead into the final eight minutes, closing the third on a 10-0 run.

Senior Todd Priggel started the run by attacking the basket and drawing a foul. He split both of his free-throws to make it a 26-19 contest with 6:28 left.

A short jumper from the right elbow by senior Tyson Goodale, then cut the deficit to five, 26-21, with 6:03 remaining.

Priggel then attacked the basket again, and drew another foul, with 3:45 left. This time, the senior calmly knocked down both of his attempts to make it 26-23.

Junior Ty Johnson then tied the game at 26, after nailing a 3-pointer from the right-wing, with 2:15 remaining, to please the Oran-heavy crowd in attendance.

Despite trailing by three at halftime, Shoemaker told his team that there were a couple of things that he felt they didn’t do.

“We didn’t rebound,” Shoemaker said. “We had a couple of uncharacteristic turnovers, and we shot some long threes early. We don’t have to settle for those shots, we wanted to try to be more aggressive offensively, and we had to step our defensive rebounding up. Those guys did that.”

Priggel would then give the Eagles its lead right back, with 5:52 left, after making both of his free-throws, to make it 30-28.

However, a right-corner 3-pointer from sophomore Landry Pitts pushed the Bobcats in front, 31-30, with just under five minutes to go, while Haven attacked the basket and converted his layup attempt, to make it a 33-30 Thayer lead with 4:19 left.

Needing a big shot, junior Langdon Scheeter stepped up and did just that as he hit a confident 3-pointer from the top of the key to tie the game at 33.

Scheeter’s 3-pointer started, what was, a 12-0 run that widened the lead for Oran down-the-stretch. The run also ended any momentum that Thayer was gaining at the time.

Following that, Oran forced a turnover which led to Cooper Priggel getting a layup to go, off a pass from Todd, that gave the Eagles a 35-33 advantage.

Another pair of free throws from Todd Priggel then pushed Oran out to a four-point lead, 37-33, with just under two minutes remaining

The free-throw line was kind to the Eagles, especially toward the end of the game.

“We got the lead and were able to take care of the basketball,” Shoemaker said. “We had one turnover late, but we were able to attack. We ran some sets, and they took away the first two options. Our kids were patient enough to find the third option, and we hit a big three out of it.”

Despite his injury, Todd didn’t show any signs of it hampering his game plan. The senior showed his aggressiveness to the basket and made them count at the free-throw line in the end.

“It’s starting to get back to how it was,” said Priggel on his ankle. “That feels good, and I hit some free-throws, finally.”

Goodale added 10 points but said that he could have helped his teammates out a little more, especially on the glass.

“I’m glad my teammates were there to help me and support me through the game,” Goodale said. “I’m glad we play as a team.”

Cooper Priggel was the final Oran player to reach double-digits, with 10, while Johnson had eight, and Scheeter six.

Haven led Thayer with 15 points, while Andrews had 13.

Oran plays No. 3-ranked Skyline (29-2) in the semifinals, on Friday, at 6:20 p.m. The game is at Hammons Student Center in Springfield, Missouri.