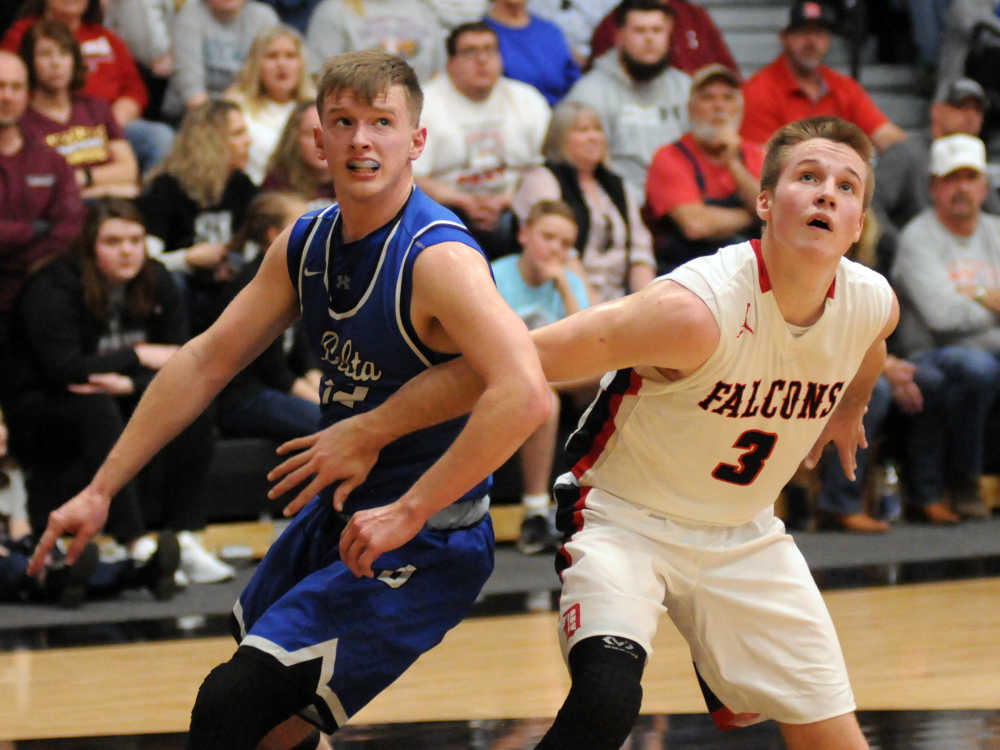 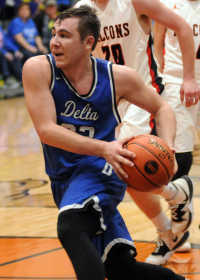 The Dora Falcons built a 57-39 lead by halftime and also won the second half by 18 points as it handed Delta a season-ending 106-70 loss in a Class 1 state quarterfinal at Van Buren High School in front of a paid attendance of 1,330. 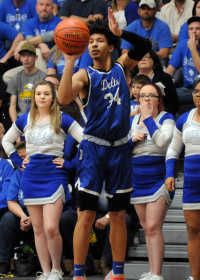 “I thought the first half the stage might have been too big for us today,” Delta coach Chris Hahn said. “We were a little tentative and our effort wasn’t there consistently. We talked to them at halftime and told them we just needed to play harder. I thought in the third quarter we came out and finally started gambling on defense and getting some steals. I felt like we should have played like that the whole game. They are a really good team and you could tell they have been here before but I don’t think this game was indicative of how we typically play.”

Dora standout junior guard Isaac Haney, who has committed to play for Missouri State University in Springfield, set the tone on offense from the get-go for the Falcons. Haney drained three field goals in the opening three minutes of play to help Dora jump out to an 11-3 lead by the 5:52 mark of the first quarter.

Delta erased the deficit quickly as it followed with its own 17-6 run. A 2-pointer by Bobcats senior guard Grant Coomer tied things up at 17-all with 1:21 left in the first quarter.

Delta remained close, trailing by just one at 22-21 with 7:35 left in the second quarter, but dug itself a big hole before halftime.

Dora scored 13 unanswered points in a spurt that included four consecutive turnovers by Delta as it padded its lead to 35-21 with 5:44 left in the first half.

“Delta is a team that plays a lot like us,” Dora coach Rick Luna said. “Our bread and butter is our defense and our defense is our best offense. I knew coming in they played the same style. There are very few teams this year that have tried to press us and we love it when teams press us. So playing against their style kind of suited us.” 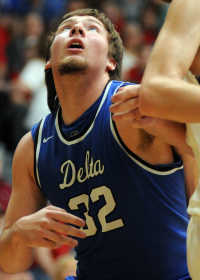 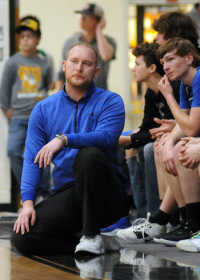 “They turned us over a little bit and we didn’t gamble at all on defense in the second quarter,” Hahn said. “Usually we can make up for our mistakes by getting our own steals and getting some easy buckets. But we just didn’t do it in the first half. We stood and watched them and they passed it through our defense and got off good shots. But they are a heck of a team.” 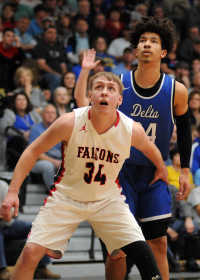 Delta regained momentum early in the second half when its turned up its pressure defense. Delta opened the second half on an 11-5 run. A 2-point bucket by Bobcats junior Colby Crader cut the deficit to 62-50 with 5:37 left in the third quarter. 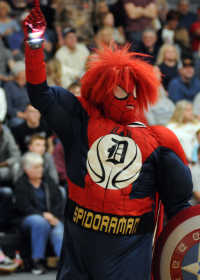 “Delta came out and did a great job to start the second half,” Rick Luna said. “We came out a little flat. We had to get our legs underneath us and catch our second wind. Then once we got going again things kind of rolled our way.”

The Falcons maintained a 90-65 lead at the end of the third quarter and outscored Delta 16-5 in the fourth quarter.

Haney, who finished with seven 2-pointers and seven treys, led all scorers with 40 points.

“He’s that type of a player,” Rick Luna said. “He’s been our guy all year long. But one thing about this team, if he doesn’t step up someone else does. We’ve got four guys averaging double-digit scoring totals. These guys have played ball well together all year.”

"When five guys score in double figures that’s a pretty good night for most teams. But we typically like to have about 30 more points on the board than what we did tonight.”” Hahn said of his offense, which entered the playoff averaging more than 95 points per game. “We were a little too stagnant at times. We didn’t push as hard as we should have against their press."

Delta entered Saturday’s sectional seven steals shy of breaking the record for most steals in a season by a Missouri high school squad. The official number of steals Delta collected against Dora was not available at press deadline Saturday. However, Hahn noted approaching the record was a great tribute to his squad’s defensive effort.

“It’s awesome, considering the fact everyone says we don’t play defense,” he said. “Steals is a defensive category and to be able to get that many steals in a season is a tribute to our kids’ hard work.”

Delta, which was ranked No. 9 in the final regular-season state poll, finishes its season with a record of 25-6. It graduates five seniors - Thomas, Berry, Bond, Coomer, and Ryan Birkman.

“This group accomplished a ton,” Hahn said. “These seniors won three games their freshmen season. Every year they kept working and every year they got better. They were very coachable and bought into my system even though everyone says this way cannot work. They were a really fun group to be around and handled adversity well all season. It’s been a great year.”

“All year long our goal has been to get back to state,” Rick Luna said. “We’ve talked about unfinished business. Last year we had five sophomores and now they are juniors. But I feel like the schedule we’ve played should help us. We started the season playing in the Tournament of Champions in Washington, Illinois. We’ve also played two teams ranked in the Top 100 in the nation. Hopefully, our guys will be ready for next week after playing some elite competition.” 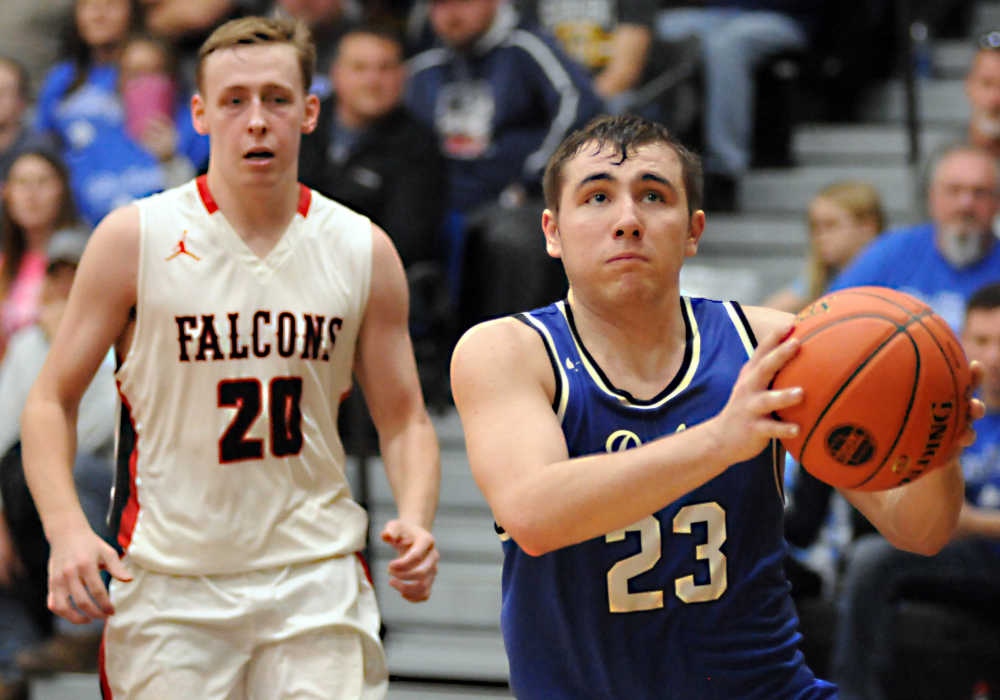 Photo by Dustin Ward, staff
Dora's Bryson Luna (20) eyes Delta's Eric Berry (23) penetrating to the basket in a Class 1 boys basketball quarterfinal Saturday at Van Buren High School.
Order this photo
Comments
View 4 comments
Note: The nature of the Internet makes it impractical for our staff to review every comment. Please note that those who post comments on this website may do so using a screen name, which may or may not reflect a website user's actual name. Readers should be careful not to assign comments to real people who may have names similar to screen names. Refrain from obscenity in your comments, and to keep discussions civil, don't say anything in a way your grandmother would be ashamed to read.
Respond to this story