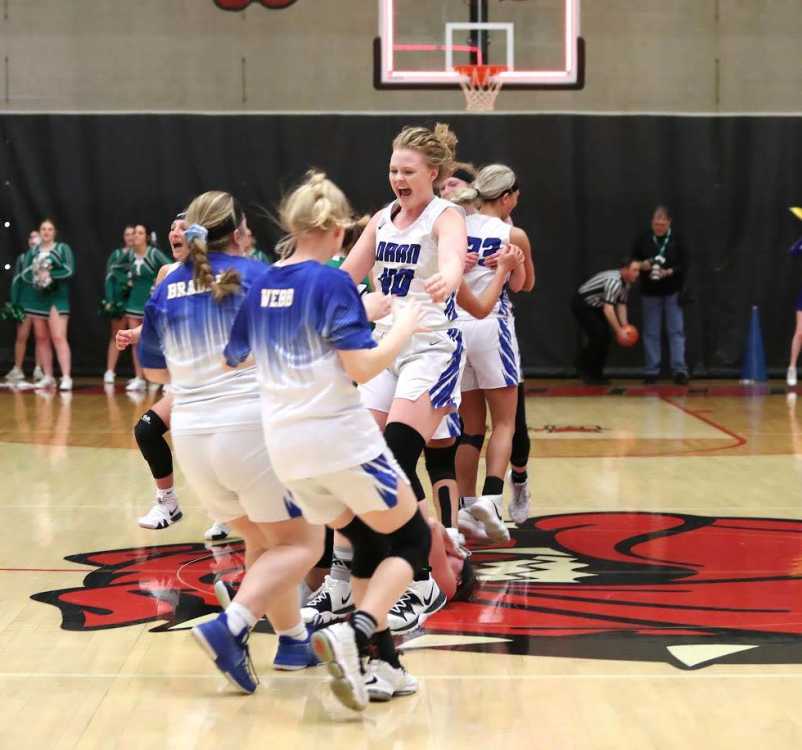 Oran's Katie Webb jumps in the air after teammates rush the floor, after a win against Thayer, in the Class 2 State Tournament Quarterfinals, on Saturday, March 7, 2020, at the Sikeston Field House.
Liza King/Standard Democrat

SIKESTON — It’s safe to say that there were nerves in the back of Oran junior Katie Webb’s mind as she headed to the free-throw line with the game on the line, Saturday afternoon at the Sikeston Field House.

Webb, however, moved past those nerves and sank both of her attempts from the charity stripe — which ended up being the clinching shots — as the Lady Eagles defeated the defending Class 2 state champion Thayer Bobcats, 41-40, in the quarterfinals of the Class 2 State Tournament. The win advanced Oran to its first trip to the semifinals since 2017.

The last time the Lady Eagles made it to the state semifinals, they finished with a record of 27-5. That season was also Oran senior Kaylee Payne’s freshman first go-around with the Lady Eagles.

Now, in her final season on-the-court, Payne was smiling from ear-to-ear and couldn’t hold her excitement after the game.

“Going into the game, I just reminded my teammates that it’s just a game, and no matter what, you got to keep your composure,” Payne said. “Winning the game was also pretty exciting.”

A battle the entire game, Oran played to Thayer’s strength — a low-scoring contest — as players from the bench rushed the floor and celebrated with their teammates.

Before Webb’s free-throw, however, it looked like Thayer was about to end the Lady Eagles season.

Out of a timeout, the Bobcats got what they wanted.

Sophomore Callie Johnson found herself wide-open in the right-corner and made the most of her open look, as she nailed a 3-pointer with seven seconds left that sent the Thayer fans in attendance into a frenzy.

After making that shot, Oran head coach Larry Boshell said that he didn’t plan on wasting a timeout. He instead wanted to play it out, which proved to be the correct call.

“If we call a timeout there, I’m not smart enough to run a great play in 10 seconds or whatever it was to get it down the floor and setup,” Boshell said. “We have a better chance with them; they’re celebrating, they’re tickled to death because they think they won the game. Our girls are pushing the ball down the floor and trying to score. We did that same thing when Dexter beat us earlier in the year.”

On the next Lady Eagles' possession, Webb caught the ball underneath the basket and drew a foul as she was going up for a shot to head to the foul line with a lot at stake.

After making her first free throw, Webb jumped up-and-down with excitement, as she tied the game right before a timeout got called.

Trailing 28-27 heading into the final quarter, Thayer started off the final period in the right direction.

Junior Madyson Kerley started the frame by drawing a foul on Oran senior Kaylee Payne — her fourth — to head to the charity stripe. She went 1-of-2 at the line to push the Bobcats ahead by one, 29-28.

Then, with 6:57 remaining, the Bobcats made it a three-point contest, after senior Jurnee Rolen cut to the basket, received a pinpoint pass, and got a layup, making it 31-28.

Oran, though, would not go away.

Freshman Grace Davis drove from the right-baseline right to the basket and converted her layup attempt, which cut the lead to one, 31-30.

After that, the Lady Eagles forced a turnover and translated that into points at their end of the floor. Sophomore Traci Hency missed her layup attempt, but there to gobble the miss was Webb, who went up strong and got her layup to drop, which gave the lead right back to Oran, 33-32.

From there, a back-and-forth game ensued.

Thayer would retake the lead, with 4:58 left, after junior Shelby Coursey caught the ball in the low-post, and made her layup attempt, to put the Bobcats ahead 33-32.

Webb would then hit a short jumper from the right elbow to push the Class 2, District 3 champions ahead 34-33, with 4:39 left.

Nearly 1 1/2 minutes later, a Kerley layup off a drive to the basket pushed the defending state champions ahead 35-34 with 3:16 remaining in the game, with the see-saw affair not stopping at that moment.

Finally pushing ahead by more than one point, senior Taylor Lowes drilled a 3-pointer from the right-wing that pushed the Lady Eagles ahead 37-35 with 2:37 left on the clock.

“I knew we couldn’t break down,” said Lowes on what she told her team after her shot. “No stupid fouls and you have to contain your excitement.”

Another layup from Kerley, however, would tie the game at 37 with 1:44 left, after she went from the right-baseline and right to the hole.

As time was dwindling, the Eagles eventually got possession with 47 seconds left — while also drawing a foul — after Webb collected a Thayer missed shot. She went on to make both of her attempts to push Oran ahead by two, 39-37, which then set up the final moments of the game.

Webb finished with a game-high 22 points, doing most of her damage in the second half.

“No. 32, she’s a great player,” Webb said. “She blocked me a couple of times, and I was really glad that we were able to get it down low, though, because our other post, Traci, whenever I wasn’t open, she was doing very well at getting my boards, and I was doing well at getting hers. We just worked great down low.”

After trailing by three, 20-17 at halftime, Oran continued displaying it’s “never quit” mentality, even when it looked like Thayer was going to pull away.

Starting the third quarter, Webb rebounded a Payne missed 3-pointer and went up strong with her second-chance opportunity. She missed her ensuing layup, though, stayed with it and got another rebound, and on the way up to the goal, drew a foul and headed to the charity stripe to earn her points.

Webb went 1-of-2 at the line to cut the Thayer deficit to 20-18, just one minute into the second half.

Then after Rolen made a driving layup to push the lead to four, 22-18, with 6:32 remaining, the Lady Eagles cut into the lead again.

With 6:03 remaining, Payne drove to the basket and drew a foul to head to the foul line. The Southeast Missouri State softball commit went on to make both of her attempts, making it 22-20.

A Rolen floater from the lane made it a four-point game, 24-20, with 5:34 left, before Hency rebounded a missed turnaround jumper from Webb, and took it to the cup while drawing a foul. She went 1-of-2 at the line to make it a three-point game, 24-21.

Following that, two more free throws by the Bobcats pushed the margin out to five, 26-21.

After her initial basket, Webb found the bottom of the net again, after Payne drove near the right-block, and delivered a pass around her Thayer defender. The pass went right into the hands of the 6-foot-1 junior, who finished with a layup.

Hency then got to the charity stripe again, after she caught the ball in the low-post and drew a foul, where she made 1 of 2, to even the score at 26 with 55 seconds left.

The run concluded for Oran after Webb rebounded a missed shot, missed her initial layup attempt, but stayed with the ball, again, and watched as her layup attempt dropped, to push Oran ahead by two, 28-26.

Johnson ended the Lady Eagles’ momentum, with 0.6 seconds left after she drew a foul to head to the charity stripe. She made 1 of 2 at the line as well, as the Bobcats trailed by one heading into the final eight minutes.

Oran faces No. 2-ranked East Buchanan (27-3) in the semifinals on Friday, at 2:40 p.m. The game is at Hammons Student Center in Springfield, Missouri.