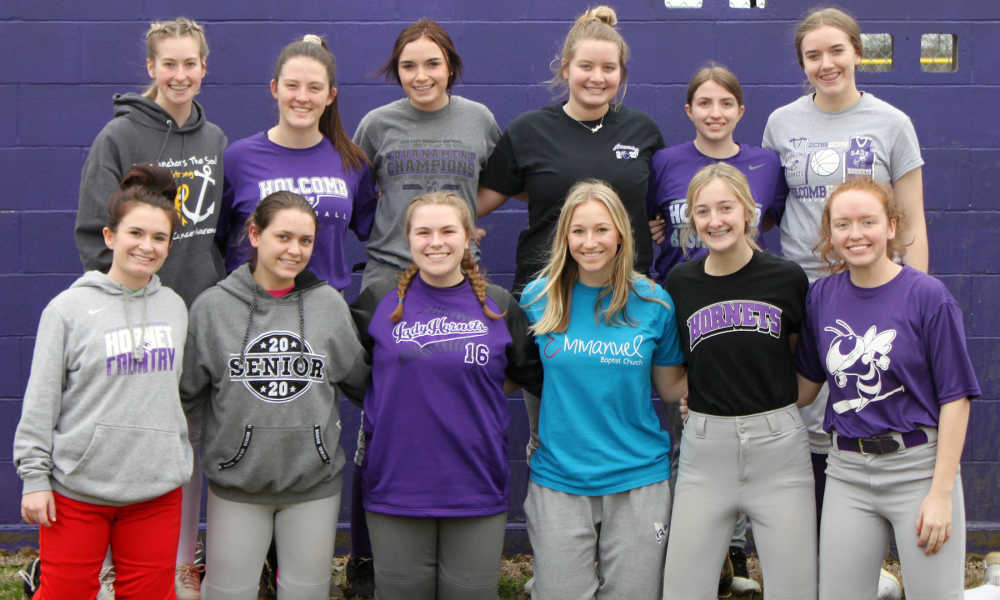 Editor's Note: This story will also be available in the Tuesday print edition of Delta Dunklin Democrat.
The Holcomb Hornets softball program enters its 2020 campaign hoping for repeat success coming off its best season in school history in 2019.

ďWe most definitely want to try to repeat our season last season,Ē Holcomb shortstop Bailey Cupples said. ďWe want to repeat as conference champs and put ourselves in a position to try to win the district.Ē

Holcomb graduated only two players off of last seasonís squad that put together a perfect regular season and finished 20-1 overall.

ďWeíve got a good core coming back,Ē Holcomb coach Matt Casper said. ďWe did lose our No. 1 pitcher last year and one of our middle of the order hitters. But this year I feel like we will be just as solid defensively, if not better, with our infielders getting a little bit older. Our pitching is a little bit of a question mark because we will have a new pitcher. But the arms we have should be able to carry the load and do a good job.Ē

ďWeíve got a bunch of girls with accolades,Ē Casper said. ďUp and down the lineup weíve got a lot of girls that will contribute with their bats.Ē

Cupples, who finished runner-up in the voting for Tri-County Conference Player of the Year last season, is among the returning sluggers.

ďOur offense will definitely help us a lot,Ē Cupples said. ďWe have a lot of good hitters. Everyone in our lineup can hit.Ē

The Hornets are looking to replace No. 1 pitcher Carli Morgan who graduated last season.

ďPitching is key, especially in softball when your best pitcher can pitch frequently,Ē Casper said. ďAlyssa Brown, Bailey Cupples, and Macy Houart are our leading candidates to pitch this season.Ē

Brown pitched the most innings of any returning player off of a squad that allowed 3.7 runs per game last season.

ďI kind of dipped my toes in the water last season,Ē Brown said. ďHopefully, this year I can step up and fill that role. Playing travel ball has helped a bunch in the offseason.

Holcomb is a heavy favorite to repeat as champs of the Tri-County Conference after going 7-0 and outscoring its opponents 115-22 in conference games last season.

"I donít mind being called the favorite,Ē Casper said. ďThatís great. But you take nothing for granted and approach the game the same way every day and hopefully, the chips will fall where they fall. I think we are more than capable of winning the conference again but whether we do it or not remains to be seen because you play the game for a reason.Ē

The Hornets only loss last season came in the Class 1, District 2 final when it fell to Malden 21-13. Holcomb hopes to be in the mix to make a playoff run this season.

ďWe still donít have our district alignments yet,Ē Casper said. ďBut down this way youíve always got Malden and Kennett to compete with. Two years ago Kennett won our district and last year we got beat by Malden. But we know there are good teams in our area and itís never easy getting out of a district. But we expect a lot out of our girls and hold them to a high standard. If they execute and play the game the right way we think we are capable of beating anybody. But you still have to play the game and I hope we find a way to stay hungry this season and peak at the right time.Ē

Casper has strengthened the Hornetsí schedule in an effort to better prepare them for the postseason. Holcomb is slated to open its season at the two-day Bearcat Bash in Jonesboro, Arkansas. Holcomb has also added defending district champions Kennett and Malden to its regular-season schedule.

ďWe went through that undefeated season last year and that was a great accomplishment,Ē Casper said. ďBut it can be a burden as well. I want our girls to see good competition early and put us in a position to have some adversity, possibly. Whether or not we come out with wins or losses early is not a big concern. I want to see us grow as a team whether itís through wins or losses. I think playing in the Arkansas Tournament will be a great early-season learning opportunity for us.Ē