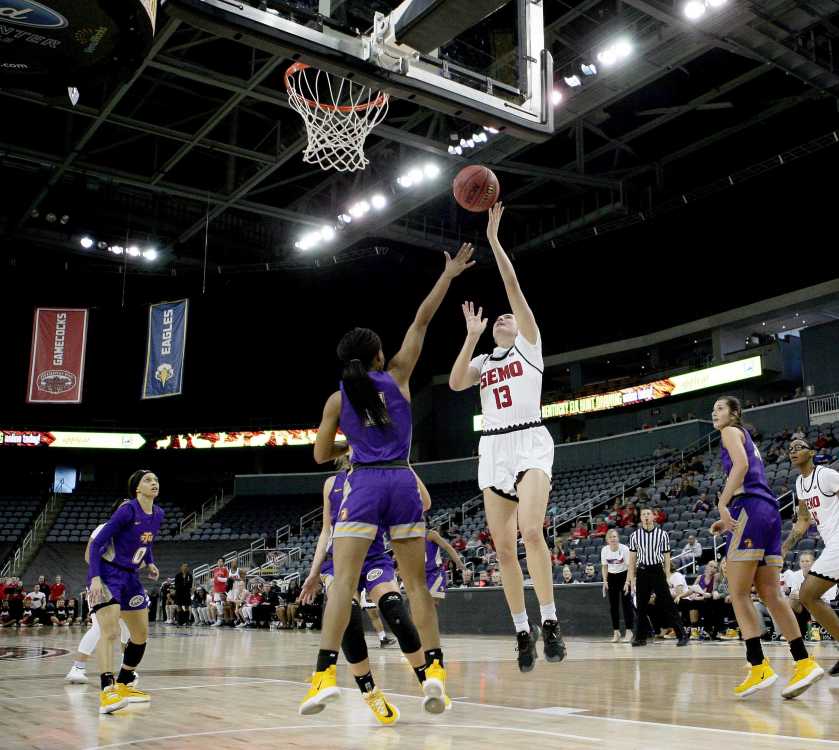 “In the last timeout of overtime,” Patterson added, “our freshman, Roshala Scott, gathered the team and said, ‘Guys, it’s not over. We can do this’!”

SEMO, the No. 3 seed, trailed the No. 6 seed Golden Eagles for nearly 26 minutes of the contest.

The Redhawks (23-7, 15-4 OVC) were down by as much as 10 early in the fourth quarter before chipping away at the Tech advantage.

Scott scored a bucket with 32 seconds left in regulation to the send the game to OT, 73-73.

In the extra period, Southeast was down by two, 81-79, until Pruitt knocked down her trey at the buzzer to win it.

Southeast’s role players stepped up big in the opening round OVC tilt, scoring 26 points off the bench.

“I can’t say enough about our (substitutes),” said Patterson. “They were ready for this moment.”

OVC First Team selection Tesia Thompson led all scorers and had a double-double, finishing with 29 points and 11 rebounds.

Thompson’s scoring performance was a bit overshadowed by her 12-for-30 shooting from the field and going 0-3 from beyond the arc.

She was perfect from the charity stripe, connecting on five free throws in as many attempts.

Jocelyn Taylor joined the junior from Memphis, Tennessee in double figures, finishing with 13.

Tech turned the ball over 17 times compared to 16 for Southeast.

Carrie Shephard, the emotional heart of the Redhawks and OVC First Team pick, had an off-day, scoring just nine points.

The 5-foot-4 redshirt senior, who will graduate with a Master’s degree in May, did not score until 5:47 was left before intermission.

Shephard did lead the victors with three steals.

“The fight and resilency of this team is amazing,” Patterson said. “To be down 10 at the start of the fourth and to find a way back (playing) the SEMO way makes me so proud.”

For Southeast, it’s onto the semifinals Friday at 3:00 p.m. at the Ford Center in Evansville, Indiana.

Next up – No. 2 Belmont, who escaped Wednesday in OT against Austin Peay.

The Redhawks fell to the Bruins in their only matchup this season, a 59-47 defeat at the Show Me Center.

Belmont has won the OVC Tournament for the last four seasons, nabbing an automatic invitation to the NCAA tournament each time.

When the Redhawks win on the road, Patterson normally treats the team to ice cream.

“T.P. doesn’t like ice cream,” said Patterson. “(Taelour) prefers beef jerky and if we win this tournament, she can have all of it she wants.”