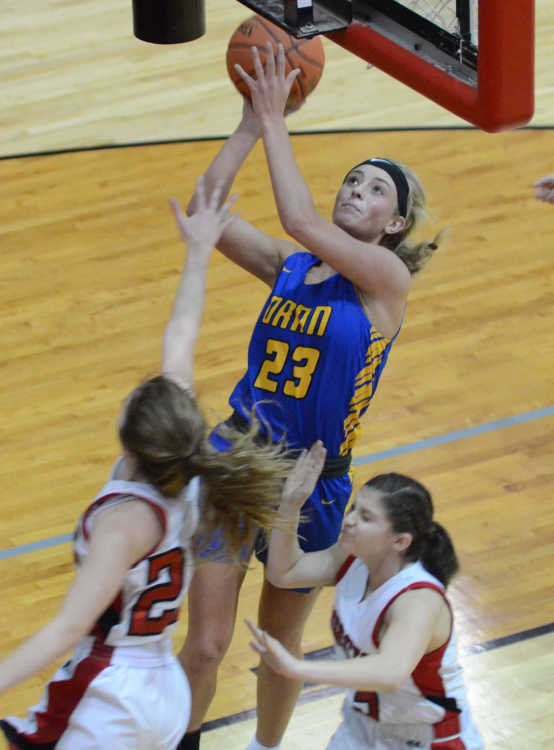 JACKSON, Mo – So far this postseason Oran has appeared on another level from their competition.

After running away from St. Vincent for a 29-point win in the Class 2, District 3 title game, the Lady Eagles put an even more dominant showing on against Crystal City in Wednesday’s sectional matchup at Jackson High School.

Kaylee Payne and Katie Webb combined for 53 points to guide Oran to a 97-35 dismantling of the Lady Hornets to propel their team to the quarterfinals.

In their four-game postseason run, the Lady Eagles have an average margin of victory of 41 points-per-game as they now stand one win away from the final four.

“You overlook somebody this time of year you can get beat,” Oran head coach Larry Boshell said of not taking teams lightly. “If you let them hang around and they start to believe they can beat you, they will.

“I told the girls we have to eliminate that from the start, so let’s go out and try to do what we can to take care of this.”

The Lady Eagles (24-5) pride themselves on post play, and that was evident from the start as Webb dominated the paint.

Webb racked up 14 points by the end of the first quarter with teammate Payne close behind with 12.

A 12-2 run to start the game was a sign of things to come as the Lady Eagles entered the second frame, already holding a 38-11 lead.

Crystal City (8-21) burned three timeouts in the first quarter alone trying to find a way to slow Oran down, a feat the proved impossible on the night.

By halftime, the Lady Eagles had wrapped up the game, going into the locker room with a 63-18 advantage.

If not for a running clock and some early subbing in the bench in the second half, Oran would have eclipsed the 100-point mark for the first time this season.

Even without reaching triple-digits, the Lady Eagles beat their season-high points total by six points with the 97-35 win.

“Our press was in the right position to force some turnovers,” Boshell said of the hot start. “We got some layups. When we did run a half-court offense, they couldn’t match our post play. Katie ended up with 24 points, and Traci Hency came off the bench and did very well too.

“We scored a lot in the post, which was nice for us.”

Webb’s 24 points left her second on the team.

Payne took the top spot with 29 points that were aided by hitting all four of the team’s 3-pointers.

Hency finished with 11 points while Grace Davis’ 10 points left her as the fourth Lady Eagle to score in the double-digits.

“They were trying to front, and we made some nice entry passes,” Boshell said. “That’s what we focus on if we’re bigger. Katie does a great job of making post moves. If she can get the ball, she’s going to get a pretty good look most times.

Oran will face their toughest test of the postseason yet when they play Thayer (17-8) Saturday at 1 p.m. at the Sikeston Field House.