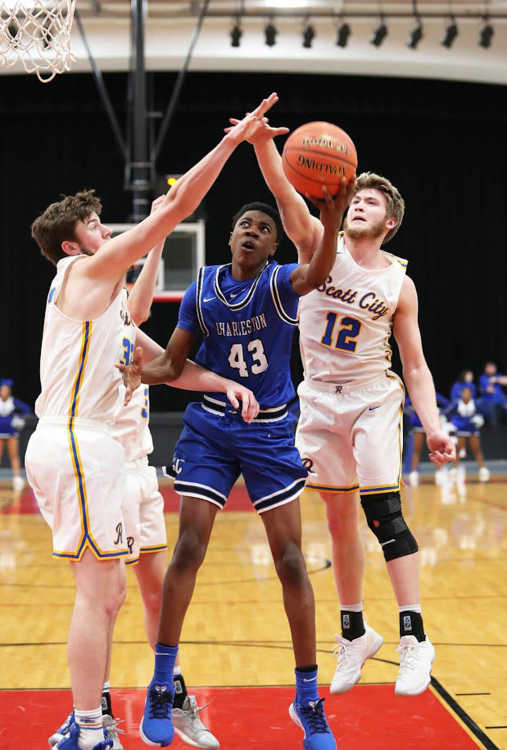 DEXTER, Mo. — It didn’t take long for Charleston to make its presence felt in Wednesday’s sectional matchup against Scott City at the Bearcat Event Center.

Senior Sam Bledsoe got things started for Charleston (26-4) after nailing a 3-pointer from the left-wing, with 7:14 left.

Then off an out-of-bounds action, senior Isaiah Gillespie made it 5-0 after converting a layup.

Another 3-pointer, this time from senior Terridean Bogan, would then push the Bluejays’ lead out to 8-0. Senior Blessin Kimble then got in the scoring column after rebounding a missed layup and finishing off a second-chance opportunity, which made it 10-0.

Scott City eventually would get on the board, with 4:47 left, after senior Spencer Stratman converted a layup on a pass from senior Joe Panagos, to make it 10-2.

Another rebound and layup from Kimble, however, pushed the lead back to double-digits before the Rams went on a 4-0 run to cut the margin to six, 12-6, with 3:56 left.

Despite an early run, Charleston never wavered from its game plan.

Senior Brian Visor started the run after going 1 of 2 at the free-throw line.

After missing his second attempt, though, senior EK Davis collected the miss and got his layup to fall, to push the lead to nine, at 15-6.

Following that, Bledsoe finished off his layup attempt after Charleston forced a turnover, and Davis ended the run, on a floater in the paint, to make it a 13-point contest, 19-6.

Junior Camden Conner’s jumper from the right-wing, with 2:28 left, ended the run before Charleston closed the opening frame by scoring four of the final six points to take a 23-10 lead into the second frame.

Punching Scott City in the mouth was just what Charleston wanted to do, as the Rams couldn’t combat the athleticism and quickness that the Bluejays offered.

“That’s the plan,” Charleston head coach Danny Farmer said. “We want to press them and make them turn the ball over and score some quick points. It’s all effort; when you get up 20 at halftime, it’s all effort. We don’t want to have a let-down.”

After a dominant first eight minutes, the second frame proved to be nearly as impressive.

Freshman Rico Coleman finished a layup off a senior Suave Fitzpatrick drive-and-dish, while a 3-pointer by Fitzpatrick from the right-wing, made it 28-12 with 6:15 left.

Then, after forcing another turnover, Bledsoe drove to the basket and drew a foul in the process. He went on to make both of his free-throw attempts, which pushed the lead to 30-12.

Bledsoe then had another chance at a layup but would miss his attempt.

Coleman, however, was on the receiving end of the miss and converted while drawing a foul. He went on to make his free-throw attempt to push the lead out to 21.

The Bluejays responded well out of the timeout, though, as they closed the frame on a 12-4 run and led 47-26 heading into halftime.

The onslaught didn’t end after the first half, as Charleston allowed 17 points — 10 in the third quarter — in the final 16 minutes while scoring 44 points.

Coleman and Kimble each led the team with 14 apiece. Kimble added nine rebounds, three assists, and three steals, while Coleman had three steals.

Gillespie added 12 points to go along with five rebounds and two steals, and Bledsoe finished with 10 points with three steals.

Conner led Scott City with 12 points, while Panagos finished with 10.

“Four great kids,” Scott City head coach Mark Dannenmueller said. “You talk about how great of kids they are at first; you don’t even think about the player side of it. They worked their butts off, and I love them all. They are the type of kids you enjoy coaching.”

Charleston now advances to Saturday’s quarterfinal round, where they play Ava (24-5) at 2:45 p.m., at the Farmington Civic Center.

A win advances the Bluejays to the semifinals of the Class 3 State Tournament in Springfield, Missouri.

“We plan to do this every year,” Farmer said. “We try to make that run. That’s what I just finished telling the kids. There’s only eight left now, and we’re one of the eight, so we have a little time to be happy, and then we got to get back to work.”