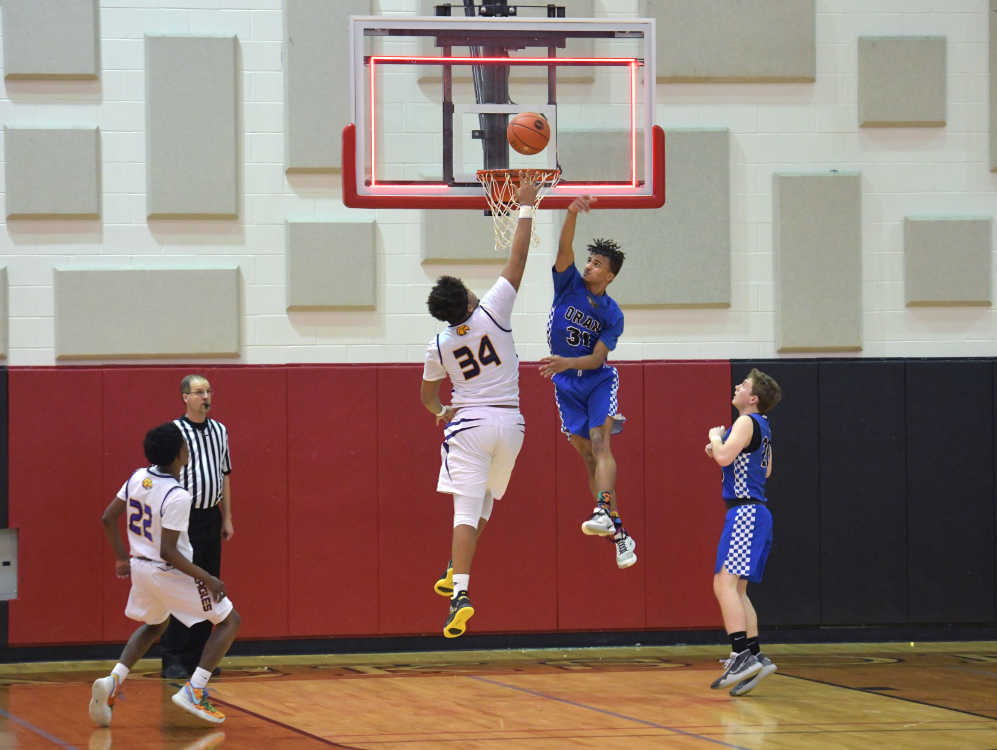 The Oran boy’s basketball team had little margin for error in its Class 2 Sectional game against Brentwood Tuesday at Jackson High School.

Brentwood had physical mismatches at two positions and kids that could rain in 3s at the other spots.

If Oran didn’t put forth 100 percent effort at the defensive end – and then some - while cutting and passing its way to some semblance of offensive success, Brentwood was getting on their bus afterward in a really good mood.

Oran did enough to survive. Barely.

Oran got a pair of free throws from junior guard Cooper Priggel – his only points of the game – with :05 remaining to beat Brentwood 59-57.

There ain’t no one built like those two in Oran – regardless of age - and Eagle coach Joe Shoemaker realized that.

“They had two extremely good offensive players mismatch-wise for us,” Shoemaker said.

That is an understatement.

Shoemaker had seniors Tyson Goodale (6-foot-1, 165 pounds? maybe) and Todd Priggle (6-foot and 175 pounds) double Mitchell (16 points) often, with a dash of Ty Johnson (5-foot-10 and 170 pounds) thrown in for good measure, but it only had moderate success.

And as far as Hill was concerned, Shoemaker was deathly afraid of the All-State guard all game long.

“(Hill) can get his shot when he wants,” Shoemaker said. “It was just whether he makes it or not. And then (Mitchell) was such a problem in the post.”

Oran had success with Hill, who averages nearly 28 points per game (second-most in the St. Louis-area).

The scrappy (if not big) Oran defenders limited Hill to 15 points, just four in the final three quarters.

Brentwood tried to keep that feeling going by feeding Mitchell on the block to open the third quarter and it worked.

Brentwood stretched its lead to nine (43-34) and Shoemaker could tell his squad needed to regroup, so he called a timeout with 4:14 remaining in the quarter.

Todd Priggle, Goodale, and Langdon Scheeter each got buckets to pull the Eagles back to within 44-40, and their pressure began to generate some turnovers to keep them in the game.

Brentwood’s response was to feed the ball to Mitchell some more, as he scored consecutive baskets to open the final period and give his team a 55-51 margin.

“I told the kids ‘Work your butt off,’” Shoemaker said of the post defense. “I didn’t have a lot of good answers for them.”

Goodale cut for a bucket off a Cooper Priggel pass to trim Oran’s deficit to 55-53 and then Todd Priggel and Scheeter made steals, with Scheeter later scoring four consecutive points to tie the game at 57 with 5:00-plus remaining.

After forcing another Brentwood turnover, Shoemaker had had enough of trying to trade punches with Brentwood. He called for Todd Priggel and Scheeter to pull the ball out and run clock.

“I thought I would rather take our chances with one shot on the offensive end,” Shoemaker said.

Oran ran the clock to just under two minutes when Todd Priggel drove and couldn’t finish.

Mitchell grabbed the rebound and threw an outlet to Hill, who was speeding down the court.

As Hill drove to the rim, Johnson, who had battled pain in his shin for most of the game and noticeably limped during breaks, got back in position and took a charge from a guy nearly 50 pounds heavier than himself.

“How about that play,” Shoemaker said shaking his head.

Oran held the ball for the final shot and with 15 seconds on the clock, began to run offensive action.

The ball was reversed to Cooper Priggel, who had missed every shot he had taken, and quite frankly, he didn’t look like he wanted the ball at THAT moment.

He began to dribble toward the top of the key and Hill bumped him and got whistled for the foul.

“His teammates had told Cooper to keep shooting the basketball,” Shoemaker said. “We want him to shoot. We expect him to shoot. We’ve talked to him before that he is one of the guys we want at the line in the end.”

Shoemaker knows his players because Priggel’s shots were perfect and Oran lived to play another day.

“Our kids could’ve hung their heads,” Shoemaker said. “We didn’t shoot well and I thought we needed to shoot well or turn them over to have a chance, to be honest.”

Goodale led the winners with 21 points, while Scheeter and Johnson added 14 each.