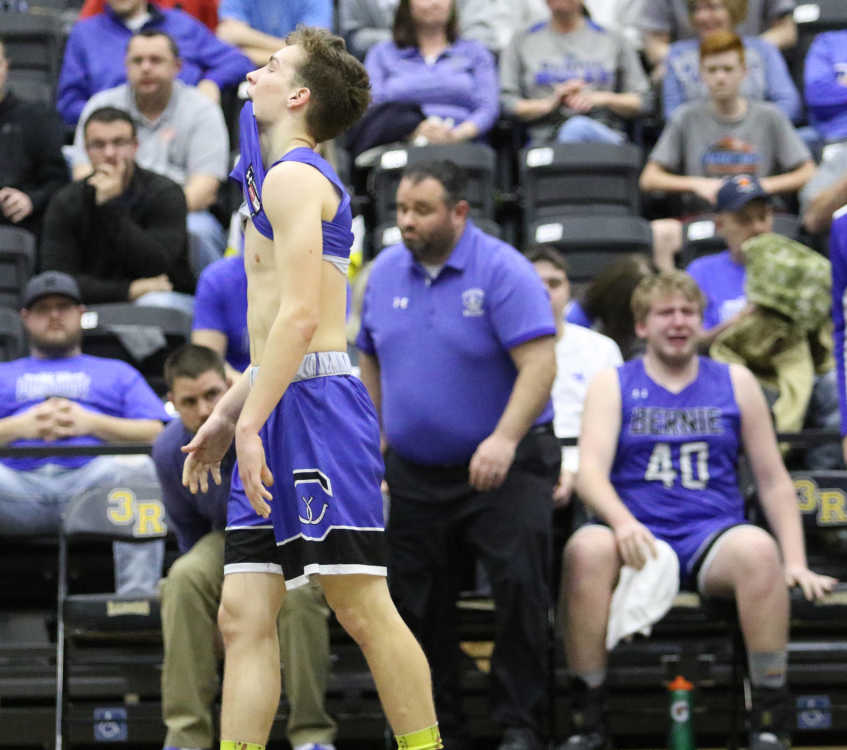 POPLAR BLUFF — The Thayer Bobcats dictated the tempo, and the Bernie boys basketball team didn’t knock down shots or rebound well enough to speed things up.

The Mules kept kicking, though, in Thayer’s 42-35 victory in the MSHSAA Class 2 sectional playoff Wednesday night at the Libla Family Sports Complex.

The Bobcats closed the game on a 9-2 run to earn their first trip to the state quarterfinals since 2014 when they finished fourth at state.

“We’re not exactly run and gun. They do generally like to play a slower pace than we do, and they’re good at it,” Bernie coach Jason Long said. “We needed to get some defensive stops late. We didn’t and credit them.”

The Mules made only 3 of 19 shots from outside in the loss, despite shooting a solid 52 percent (11 of 21) from inside the arc.

“They were aggressive. They did a good job guarding the perimeter and we had trouble adjusting,” said Long, who took responsibility for the loss.

“We were talking about that after the game. The kids said we could’ve done this better and that better. But really the bottom line is, I didn’t do a good enough job of getting them ready to play against Thayer’s zone. That’s on me as a coach. I didn’t do a good job in that area.”

Thayer (22-5) will meet Oran in the quarterfinals at 2:45 p.m. Saturday at the Sikeston Field House. Oran beat Brentwood 59-57 Wednesday night.

Bernie finished the season with a 24-6 record.

“We had a phenomenal season,” Long said. “We’ve got a fantastic group of boys who could have easily lost in the district tournament, but they really stepped up. They’ve worked hard all year. I feel like they got a lot out of their abilities.”

Jordan Andrews paced Thayer with a game-high 16 points and Jayce Haven had 11.

Andrew Geohagan led the Mules with 15 points and Tyler Suiter had seven.

Thayer led for almost all of the game, but Johnny Vaughn’s steal and layup tied the score for a third time (33-33) midway through the final quarter.

Gaige Pitts responded with a 3-pointer to take a 36-33 lead, and Andrews made a midrange jumper to extend the Bobcats’ lead to 38-33.

After Suiter finished on a feed inside by Landon Zoll, the Bobcats scored the game’s final four points — Haven drove inside for a layup and Gaige Pitts sank two free throws to set the final margin.

The Bobcats utilized the fast break and solid rebounding to take the early lead.

“They were bigger and more physical,” Long said of his team’s rebounding woes. “They were very aggressive. They were more aggressive to the ball. That’s part of earning it.”

Bernie made only one of six 3-point tries in the opening quarter.

The Bobcats scored the first four points of the game on driving layups Haven and Landon Pitts.

The teams traded baskets twice before Thayer closed the quarter with a 7-3 run to take a 13-7 lead into the second.

Landry Pitts and Bernie’s Zoll exchanged 3-pointers, and the Bobcats led by six at quarter’s end.

The Mules tied the score at 18 in the second on a putback by Suiter and a layup by Geohagan.

Thayer scored six of the quarter’s final eight points to take a 24-20 lead into halftime.

Bernie did a better job on the boards in the second and sank 3 of 3 free throws to cut into the lead.

The Mules went 0 for 5 from 3-point range but compensated with a 5-of-7 showing from inside the arc.

Bernie cut the lead to one in the third quarter. Geohagan scored inside and Zoll made a 3 to trim the lead to 29-28.

Andrews scored on a pass from Haven for a 31-28 lead, entering the final quarter.

Vaughn’s 3-pointer tied the score at 31 a few minutes into a low-scoring fourth quarter. Logan Doss followed with two free throws to reestablish Thayer’s lead before Vaughn tied the score for the final time.