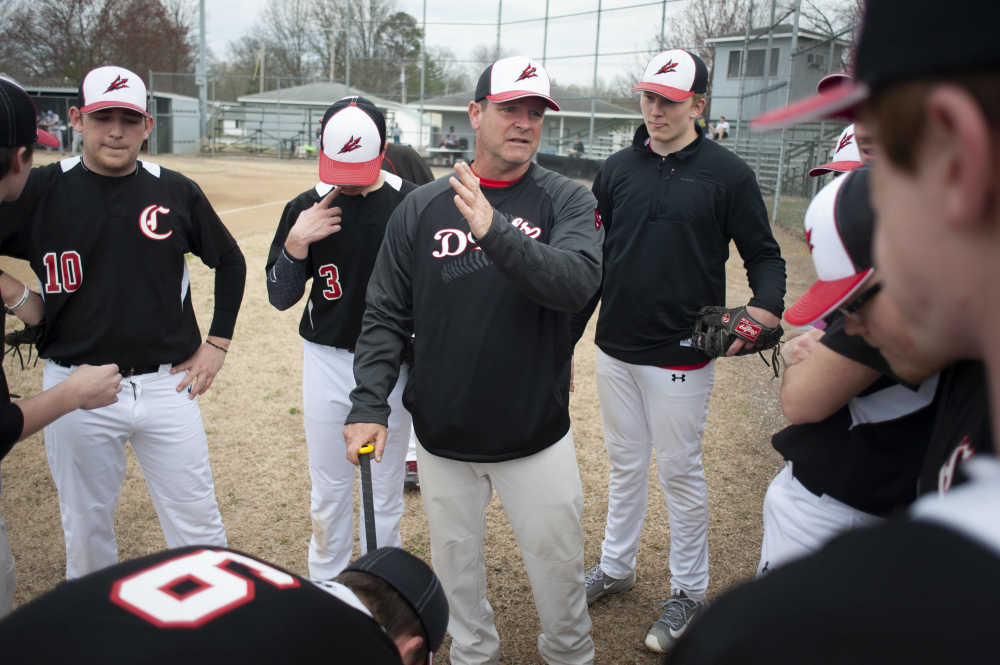 Chaffee head coach Brian Horrell speaks to the Red Devils near Andrew Brown (10), Wyatt Parker (3) and Jagger Sadler (27), right of Horrell, before the start of the team's 11-1 victory against the Oak Ridge BlueJays on Thursday, March 28, 2019, in Chaffee.
Jacob Wiegand ~ Southeast Missourian
Order this photo

Here’s my typical day: I start off driving a bus route first thing, then teach two health classes at the junior high. I’m CHS assistant principal, so I spend some time dealing with attendance issues. Then I drive a pre-K bus route before coming back and helping serve lunch. If it’s a nice day, I’ll walk outside with the kids. I’m also the district’s transportation coordinator, so I’ll log some time at the bus shed. Then I’ll drive my third bus route of the day. After all of that, I turn to coaching.

Did you play ball yourself?

I was a middle infielder, shortstop and second base, also a pitcher. Chaffee was Class 1 in those days. I was the top hitter on the Red Devils as a sophomore and senior.

Did you think you personally had a future at the next level?

Well, I did play a year for the SEMO Indians (at that time) but it was hard for me to adjust to becoming a role player in college. I gravitated pretty quickly to coaching.

Jeff Graviett, the Notre Dame baseball/softball coach and athletic director, played for you at Chaffee back in the day. Graviett started coaching high school while still at Southeast. You too?

Yes, a similar path for me. As a SEMO undergraduate, I started coaching under Bob Coons and in my senior year, the manager was Bruce Qualls. I took over the baseball team from Bruce in 2000.

Is there a Brian Horrell coaching tree?

I can think of three people right off the bat. My first assistant, Jerry Wolsey, is baseball coach with the Kelly Hawks. Joe Bickings, who was an assistant with me for more than four years, is the head man at Oran. Jim May, best known as the football coach at Scott City, was a baseball assistant with me in Chaffee. (Another former Red Devil, Tyson Moyers, who used to be Chaffee’s A.D., is now athletic director at Cape Girardeau Central.)

Yes, the first official day of practice – not just for us, but everybody - was Monday. Our season starts March 20. I’m pleased that on rainy days, the district provides us with two nice indoor batting cages.

You’ve had a long run in your hometown.

I’ve had chances to leave, to go to bigger schools. I’ve never been one to jump from school to school, chasing better talent elsewhere. In a small district like CHS, talent comes in cycles. It goes up and down and you weather the storms. The real glue for me is this community. Chaffee is a little Mayberry, you know?

Mayberry from the Andy Griffith Show, from the 1960s?

Exactly. (Chaffee is) a hidden gem. Everybody here lends a hand and is willing to help. The community, our boosters and these kids have a special place in my heart. Our baseball team does fundraisers and the town really backs them. We do a fried chicken and dumplings event in the fall and pancakes and sausages in the spring. Tyson (Moyers) had an idea for our team to clean the Catholic Church, just to give back. Our players are doing an Easter egg hunt for children and grandchildren. Just like I said, this is Mayberry.

As a younger man, I worried more about wins and losses. Coaching here in Mayberry, I don’t expect to get fired if we have a poor mix of W’s and L’s. Don’t get me wrong, I want to win but now I understand better what sports are for. 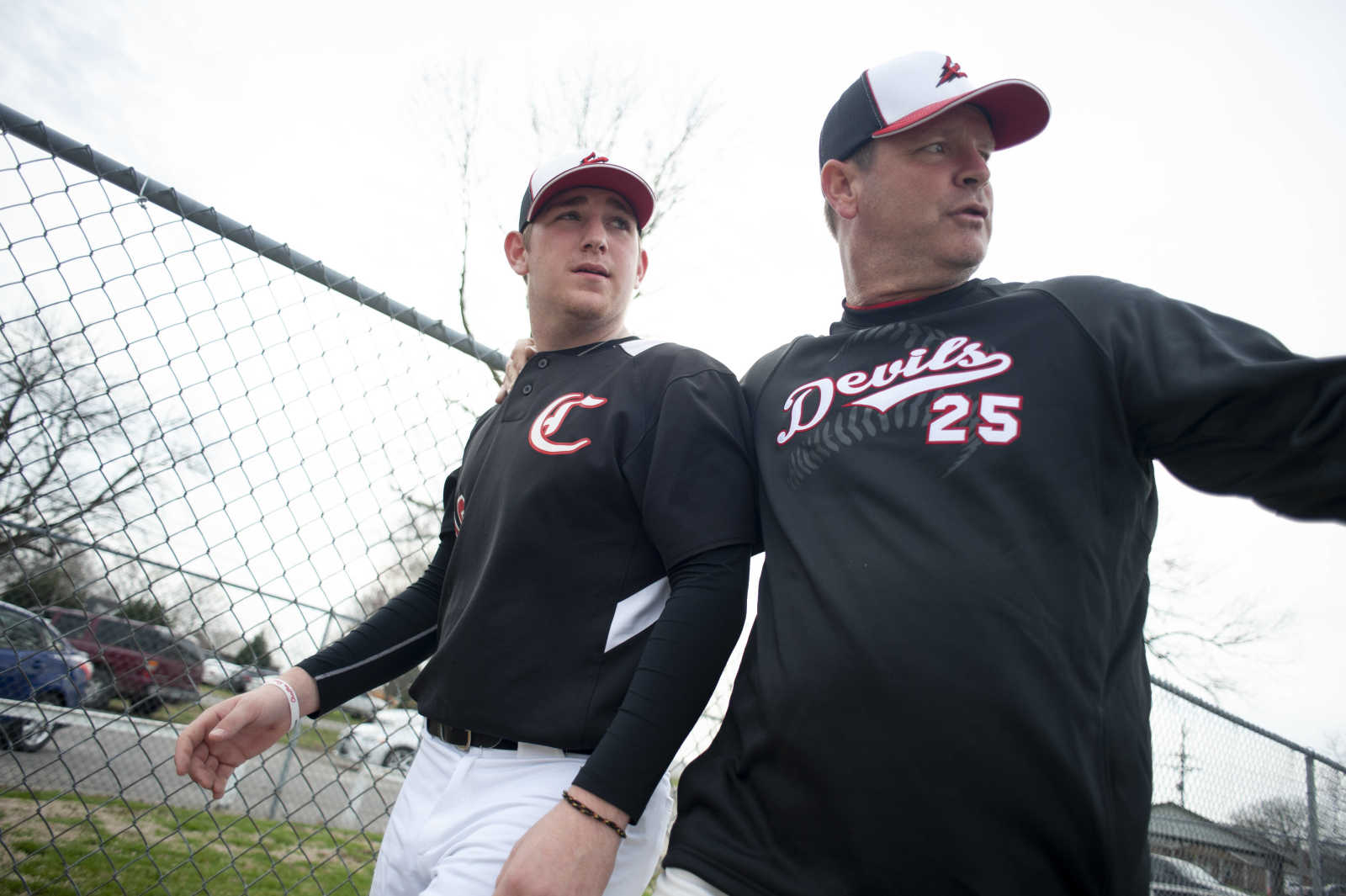 Today, more than ever, sports give youth a chance to interact socially. Kids today text more than they talk. You can’t be texting or checking social media while you’re on the field. Sports can develop social skills and personal interaction abilities. Plus, being involved in a sport can allow you to obtain friends for a lifetime.

Any advice you’d give a younger coach, one starting out?

With your student-athletes, and this is not original with me, you have to show ‘em how much you care. I’d tell someone you can change lives through athletics, change ‘em for a lifetime. We’ve got a platform as coaches to leave an imprint. I like to think of myself as a transformational coach. The FCA (Fellowship of Christian Athletes) chapter at Chaffee, and there is also a great one at Southeast, has helped me with this idea.

Have you seen your philosophy bear any fruit?

I think so. Former Chaffee players, alumni, come back and give their time to youth camps and leagues. That’s an example. Also, it is gratifying to receive wedding invitations and birth announcements in the mail from boys – who became men – who played for me.

Speaking of boys who became men, you have a son.

One child, my son, Aaron, who is 29. He teaches in the district and is an assistant for the team as is Shawn Powderly.

Say a word about family, please.

My late mother was one of nine children. Mom worked in a shoe factory. My dad, who was one of five, is 82 and worked in a grocery warehouse. I am the youngest of three. My dad used to tell me as I was playing sports to respect the coach. He’d say, “Do it his way.”

How long do you expect to keep coaching?

I expect to retire from the classroom before I let loose of coaching. I want to stay involved with youth. One thing tempts me, though. I’ve got a grandchild now who will be three at the end of May. If little Bailey says, “Paw-paw, I want to go to the park,” I think I’d like to be able to do that. We’ll see. But I tell you, nothing beats being a grandparent.