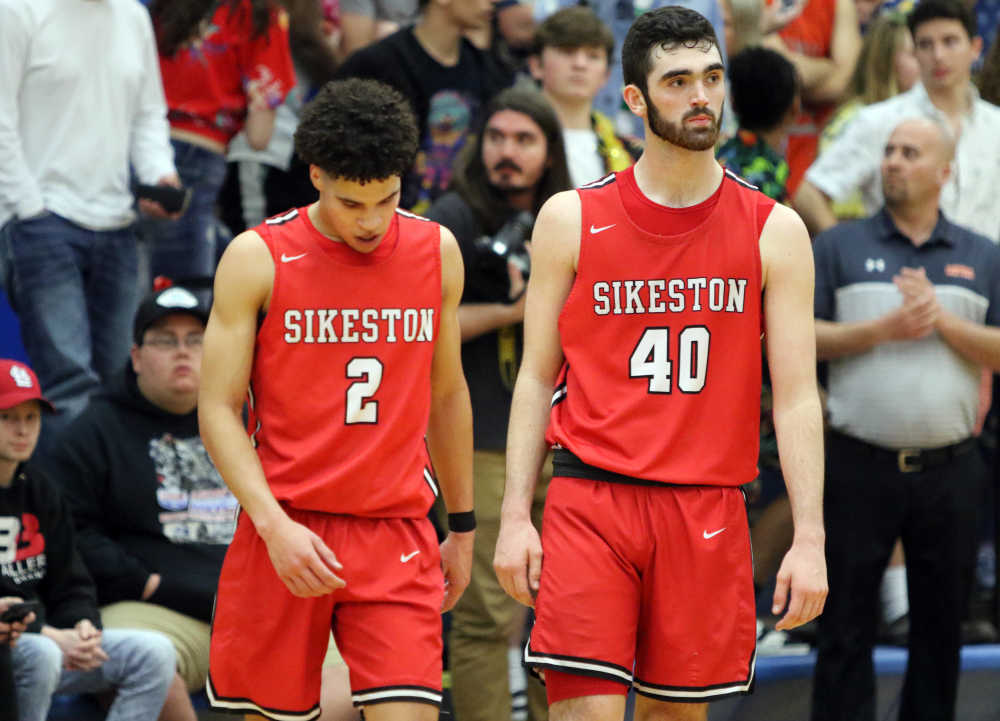 Records get put aside come postseason play, and for Sikeston, that was the case, as the Bulldogs battled to the very end, albeit in a 52-47 loss to the Tigers. The defeat ended Sikeston’s season at 16-10 and was the third-straight loss to Cape Central this season — and fourth altogether.

Both teams know each other’s tendencies, and yet they still managed to provide the sold-out crowd with another classic game between the two rivals.

“Sikeston had a great game plan,” Cape Central head coach Drew Church said. “They were kind of playing some junk defenses and choosing to guard some guys and not guard some guys. It was an old-fashioned, ugly offensive, SEMO Conference war. It’s hard to beat a team three times. You know each other so well, and our teams do, and it just comes down to how the ball bounces.”

In the waning moments of the game, it looked like Cape Central was bound to close out the contest after senior Doreante’ Tucker hit a pull-up, free-throw line jumper, to push the No. 2-seeded Tigers out to a five-point advantage, 41-36, with 1:50 remaining.

Sikeston, though, came back with a 5-0 run to knot the game up and force an extra four minutes.

Senior Payton Howard converted a pair of free-throws to cut the deficit to three, 41-38, with 1:35 left.

Following Howard’s successful free-throw attempts, junior Leroy Atkins made the biggest 3-pointer of his varsity career to tie the game with one minute remaining, after he knocked down an NBA-range 3-pointer, and forcing a Sikeston timeout.

“It’s a situation where we put ourselves into a position to win,” Sikeston head coach Gregg Holifield said. “Our guys battled and Leroy — such a great shooter — just stepped up. He’s made big shots all year, and he’s been hampered the past three weeks and doesn’t quite have the mobility that he had midway through the season. But, he’s battled to get back, and he played well down the stretch.”

With possession and looking to take the last shot, Cape Central put the ball in the hands of senior Tyrus Reddin.

As Reddin neared the right corner, he was guarded heavily and tried to find some breathing room for a look at the basket.

He got just that, but as the ball sailed over the rim and into the hands of Sikeston senior Clark Steward, he tried to call a timeout while controlling the ball. However, the official ruled that he was out-of-bounds, after collecting the miss, to give Cape Central one last shot to win the game in regulation.

However, that was not the case.

On the ensuing out-of-bounds action for the Tigers, senior Dorian Triplett tried to inbound the ball. Sikeston junior Lontas McClinton, though, denied the pass and attempted a last-second heave that hit the top of the backboard to force an extra period.

Once overtime hit, the free-throw line proved to be a deciding factor in the result.

To start the period, Steward drove into the lane, put a spin move on his defender, and drew the foul to head to the foul line for a chance to put the No. 3 seed ahead.

Steward — who was 5 of 6 at the charity stripe heading into overtime — missed both attempts, to keep the score the same with 3:46 remaining.

On the other end, Cape Central did not miss their opportunity to pull ahead, as junior Darion Triplett got Steward to bite on a pump fake from the 3-point line, took one dribble inside the 3-point range, and knocked down a mid-range shot, to push the Tigers ahead 43-41 with 3:13 left.

Then just one minute later, Sikeston forced Cape Central to turn the ball over, and as Howard was racing down the floor, looking to attack, got fouled in the process and headed to the free-throw line for a chance to tie the game once again, with just over two minutes left.

On the Tigers’ next possession, freshman Cameron Williams finally broke into the scoring column after getting his layup to fall, to give his a team a 45-42 lead with 2:06 left.

The Tigers followed up that successful trip with a chance to push ahead by two possessions, but Williams missed both of his free-throw opportunities to keep the score at 45-42 with 1:59 left.

Holding their own on the defensive end of the floor, the Tigers continued to make Sikeston struggle. They eventually pulled ahead by five, 47-42, after Reddin attacked the basket and drew the foul to head to the line with 1:18 remaining. He went on to make both of his free throws and finished with 11 points along with going 7 of 10 at the charity stripe.

Smelling blood in the water, the Tigers finished off the game at the foul line, as Darion Triplett made both of his attempts to put his team up 49-42 with 33.1 seconds left.

Reddin then provided the final points for the Tigers, after making 1 of his 2 attempts at the foul line, to push the lead to eight, 52-44, before Atkins made a 3-pointer with four seconds left, to equal the final total.

“We exerted so much energy trying to battle back,” said Steward on what he saw from his team during overtime. “That extra four minutes, we couldn’t get shots to fall. We were having a hard time; we had some good looks, and we weren’t getting anything to fall. We battled our tails off all night, and I’m proud of this team.

Steward finished with nine points, on 3 of 9 shooting, with four rebounds, one assist, two steals, and one blocked shot.

Howard finished with a game-high 18 points — 11 in the second half and overtime — on 5 of 23 shooting. He added five rebounds, three assists, and three steals, and said that Cape Central did a good job of giving him hard looks at the basket.

“A lot of ball pressure,” said Howard on his shooting struggles against the Tigers. “Cape’s a really good team, a really good defense. They came with a plan, and unfortunately, I couldn’t get many shots to fall.”

Howard was the only Sikeston player to reach double-figures in the scoring column.

For Cape Central, both Dorian and Darion Triplett had quality games.

Darion Triplett had a team-high 14 points — all in the second half and overtime — while Dorian Triplett had 13 points — nearly all of which came in the first half — as the Bulldogs were trying to take away the opportunities for Tucker and Reddin to create damage.

“That’s what you want,” Church said. “When some of your guys have a tough game or are overplayed, and we knew this was coming. At some point, someone was going to run some junk defenses against us, and we prepared against it. It’s not like; we came out on the fly. Darion and Dorian stepped up.”

It was a season of questions for Sikeston, and in the end, Holifield said that he felt like his team did a great job and couldn’t be more proud.

“I’ve just enjoyed coaching this team,” Holifield said. “They’re great kids to be around. It’s one of my favorite years I’ve had coaching. I’ve enjoyed every second of it. They are low-maintenance, work hard, and have no problems, and I tell them all the time, they are one of my favorite teams I’ve ever had.”

The loss snaps a string of 14 years of earning a trip to the district championship game for the Bulldogs — with the last time coming in 2005.