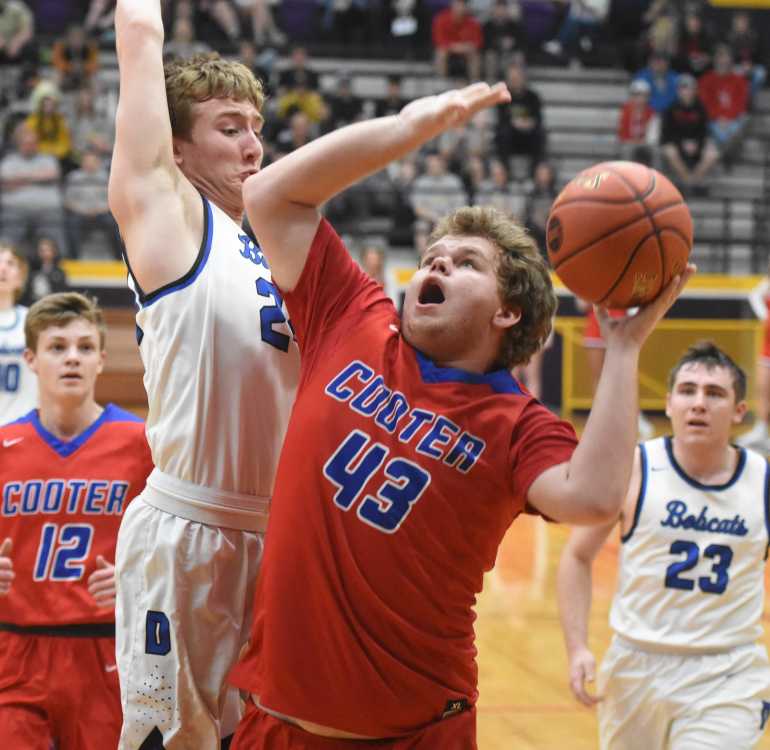 The offensive success continued for Delta against Cooter. Delta scored at least 23 points in every quarter as it shot its way past Cooter 120-82.

“I felt we got sharper when the second quarter started tonight,” Delta coach Chris Hahn said. “I didn’t think we played very well the first quarter but Cooter came out strong. That’s a credit to Coach Mathis because he gets his kids to believe and play hard. But we really cleaned things up after the first quarter."

Neither team led by more than a few points early on.

But they lead didn't last long for the Wildcats.

Delta scored the next seven points to move ahead 12-8 with 3:14 left in the first quarter and padded its lead to 23-16 by the start of the second quarter.

The Bobcats took complete control soon after as it outscored Cooter 41-25 in the second quarter to increase its lead to 64-41 by halftime.

“We knew coming in what they were going to do,” Cooter coach David Mathis said. “We just couldn’t simulate their press in practice trying to have our younger bunch press our other guys. We handled it the best we could but it was called pretty physical and I knew if it was like that it was going to be tough on us. We also missed some shots early. We may have stayed in it a little longer if we could have knocked some shots down. But over time they just wore us down, got us in foul trouble, and then we couldn’t stop them from scoring at the basket. They are a big-time team that hasn’t lost to a Class 1 school all season.”

Senior guard Eric Berry and junior forward Crader also put up points early. Berry scored 14 of his 18 points before halftime and Crader tallied 10 of his 14 points in the first half.

“Berry kind of controls everything in our offense and Crader does so much for us in the middle,” Hahn said. “Thomas, Berry, and Crader have been three of our cornerstones on offense lately.”

“They are the best leaders we could ever have,” Mathis said of his only seniors. “Both are straight-A students that come in and lift at 5:30 every morning. Both are headed to College of the Ozarks to play baseball. If you want to model a son after someone these are two you want to model him after.”

Mathis said Cooter, a traditional baseball powerhouse, will begin fine-tuning its skills on the baseball diamond Wednesday morning. Cooter finishes its basketball campaign with a record of 17-9.

“Our goal is to win a state title every year in baseball,” Mathis said. “But I just told this group that they kind of put us on the map in basketball. Now next year’s goal is to reach the state quarterfinal in basketball. That’s how we treat it at Cooter. We try to go farther than the class before. But I hope Delta and Coach Hahn win the whole thing because he’s one of my favorite coaches and he really deserves it.”

“I saw them play in the state quarterfinals against Risco last year and have seen a couple of highlights of them this year,” Hahn said of last year’s Class 1 runner-up in the state tournament. “I’ll try to get as much film as possible on them Wednesday. I hear they are a very good basketball team. I hope our whole town comes out to support us on Saturday at Van Buren.”