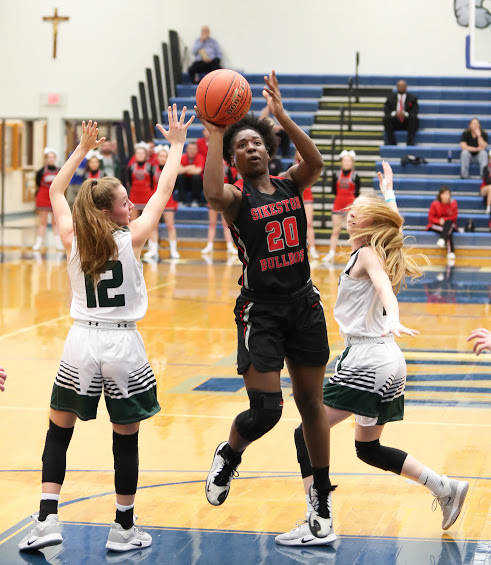 Sikeston's Taydrianna Barnett (20) drives to the basket for a shot, against Ste. Genevieve, in the quarterfinals of the Class 4, District 1 Tournament, at Notre Dame Regional High School, in Cape Girardeau, Mo., on Monday, March 2, 2020.
Liza King/Standard Democrat

That though was not sustainable, as the Dragons downed Sikeston 60-48 to end its season at 15-11.

From start-to-finish, Sikeston battled the No. 1 seed in the tournament, but ran out of gas — and time — in the end in an attempt to make one last comeback.

“We laid down,” said Sikeston head coach Alisha Wills on her team’s reaction after closing in on the Ste. Genevieve lead. “Twice, Tay (Barnett) went in for a shot and got called for a charge. I think that made her pull back and be less aggressive. She’s going to go to the basket, and that got in her head. It’s one of those things. It’s such a mental game; you can’t let things like that nag at you, and tonight we let that show.”

A competitive first quarter ended in a 15-15 stalemate after the first eight minutes of the game.

Trailing 13-5 with 3:02 remaining, Sikeston went on a 10-2 run to close the frame with momentum squarely on the Lady Bulldogs’ side.

After Ste. Genevieve junior Megan Aubuchon made a layup to increase the Dragons lead to eight, Sikeston answered with an Armani Hodges layup to cut the deficit to 13-7, with 2:46 left.

Barnett then went on to score six of the next eight Sikeston points to tie the game at 13 with 49 seconds remaining.

The senior started her run by collecting a rebound off her own missed shot and converting her layup attempt to make it a 13-9 contest. Then, after a missed Dragons’ 3-pointer, she took it right to the rim for another layup to cut the margin to two, 13-11.

Sophomore Karris Allen would then tie the game, on a layup of her own, before Ste. Genevieve knocked down a pair of free throws to regain the lead at 15-13.

However, that lead was short-lived, as — with 21 seconds remaining — Barnett drove into the lane and got another layup attempt — this time from the paint — to drop, to tie the game once again.

As time was winding down in the period, Barnett nearly finished the quarter off in-style as she attacked the basket and got a clean look, but her shot went off the side of the rim and missed just as the buzzer sounded.

The Lady Bulldogs rally continued in the second quarter as well.

Ste. Genevieve took the lead once again to start the frame, as junior Marysa Flieg hit a pull-up jumper with 6:47 remaining to give the Dragons a 17-15 advantage.

Flieg — who had a game-high 24 points — then increased the Ste. Genevieve lead to four after she rebounded a shot and put it right back up for a layup, with 5:54 left.

Sikeston, though, rallied off the next four points to tie the game again, with 4:36 remaining before halftime — both on Barnett baskets.

First, she rebounded a missed 3-pointer from sophomore Amyari Blissett and turned that into a layup to make it 19-17. She then followed that up with another layup to tie the game before the Dragons went on a 7-0 run to widen the gap.

Scoring the first four points of the third quarter, the Dragons looked to be well on their way to a victory by a large margin, but the Lady Bulldogs had other plans.

After trailing by as many as 19 points with just under four minutes to go, Sikeston showed resilience and heart to, eventually, make another comeback.

Sikeston went on a 10-2 run to close the third period.

Coming off an end to the third that saw the Lady Bulldogs seemingly gain momentum back on its side, the Dragons made sure not to let them gain much more.

Ste. Genevieve started the fourth by increasing it’s lead to 14, 46-32, after junior Sydney Bumgardaner nailed a 3-pointer from the left-wing, with 6:37 left.

Another 3-pointer from the Dragons — this one courtesy of junior Maci Reynolds — halted momentum, though, as the No. 1 seed took a 51-40 lead with 4:35 remaining in the game.

Eight points would be the closest the Lady Bulldogs would get in the second half, as the Dragons led wire-to-wire.

After seeing the Dragons earlier in the season — a 64-58 loss on January 25 — Wills said that Monday’s game was going to be about contesting the Ste. Genevieve shooters while also adjusting to how they defended her team.

“We knew they would be keying on trying to beat us back,” Wills said. “They did that a couple of times and we had to make adjustments for it. It’s one of those things. We’re such a young team, and sometimes you have those moments where you lapse, and you go back to old ways. Know what it took to get you here, but sometimes you never know.”

Barnett is the only senior that Sikeston graduates this season. She finished with 17 points on the night.

Additionally, Barnett said that she is always going to remember how far her team has come along.

“From my freshman year all the way up to when I was a senior, the teammates I’ve had have evolved me into a better player,” Barnett said. “I appreciate that. The coaching staff I’ve had has also been pushing me to the best I can be, and that’s what got me to where I am now.”