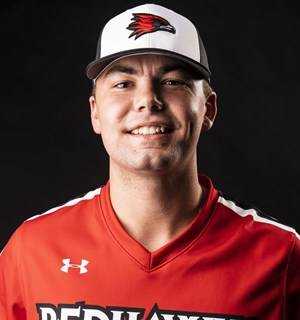 There is nothing better for a struggling baseball squad than a series sweep to regain some of its positive mojo.

That was the case with Southeast Missouri State, as it swept a four-game series with Ohio University to even its season record at 6-6.

The Redhawks clicked offensively in the last two games after having to ride pitching through a pair of early wins.

In Sunday’s 9-7 victory at Capaha Field, Southeast led just 3-2 in the bottom of the fourth inning before dropping a couple of runs on the Bobcats (3-8) over each of the next three innings to stretch its margin to 9-3.

Shortstop Tyler Wilber, outfielder Justin Dirden, and catcher Andrew Keck each connected for a pair of hits in the win and each also scored twice. Dirden totaled three RBIs, as he homered for the second time this season.

Keegan Meyn earned his first save by throwing no-hit, no-run ball over the final 2/3 inning.

Dodd (1-1) allowed five hits and struck out a career-best 15 batters.

Wilber had a pair of hits and as many runs, while first baseman Austin Blazevic connected for a couple of hits and drove in three in the win.

Southeast got another 3-0 win to open a doubleheader Saturday, as pitcher Noah Niznik threw a complete seven-inning game and limited Ohio to just three hits.

Danny Wright, Keck and Blazevic each had a hit, while Keck homered and drove in three.

The Redhawks methodically beat Ohio to close the two Saturday games by scoring five runs over the initial three innings.

The offense was humming, as Wright, Wilber, Dirden, Keck (three RBIs), Stauss, and Jackson alum Landon Hahn each had a couple of hits.

Southeast travels to Arkansas State Tuesday at 6 p.m. for a single game.