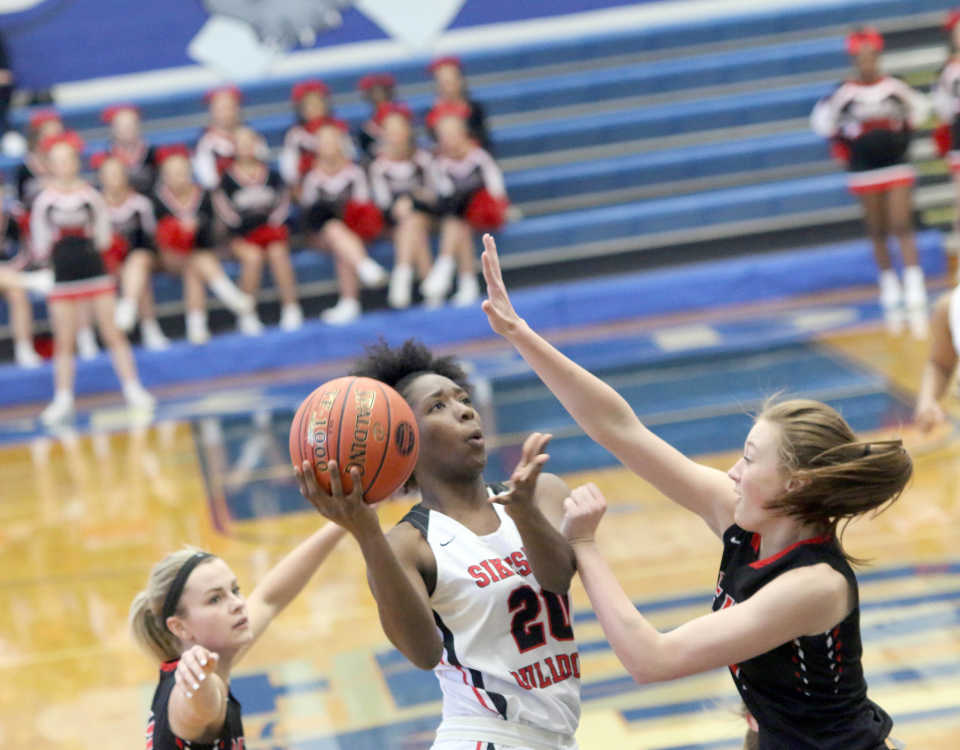 Sikeston's Taydrianna Barnett eyes the basket for a layup, against Dexter, in the first round of the Class 4, District 1 Tournament, on Saturday, Feb. 29, 2020, at Notre Dame Regional High School, in Cape Girardeau, Mo.
Alex Wallner/Standard Democrat

CAPE GIRARDEAU, Mo. — There was no quit from the Sikeston girls basketball team in its first-round matchup, against Dexter, in the Class 4, District 1 Tournament on Saturday afternoon.

Trailing by double-digits at different stages of the first half, Sikeston didn’t look nearly its strongest, in its 66-65 win.

Dexter led 24-16 after the first quarter and 37-28 at halftime, as the Lady Bearcats looked to avenge a lopsided loss earlier in the season.

A tie game with 5:40 left, the Lady Bulldogs broke the tie, after senior Taydrianna Barnett nailed a 3-pointer from the left-wing, to give Sikeston an 8-5 advantage.

Coming back with a response, sophomore Dulcie Pullen got free underneath the basket and made a wide-open layup to cut the lead to one point, 8-7, with 5:20 remaining in the first period.

Another Sikeston basket — this after sophomore Karris Allen dribbled into the lane and got her short jumper to drop — pushed the No. 4 seed ahead 10-7 with just under five minutes to go.

Pullen added another layup off an out-of-bounds action, while junior Sydney Asberry nailed a 3-pointer from the top of the key, that pushed the Lady Bearcats out to a 12-10 lead.

Sophomore Magi McBride then made a layup of her own off a turnover to make it 14-10, while Asberry nailed a short jumper from the right elbow to push the No. 5 seed ahead 16-10.

The run would not stop there, though. With 2:27 left, Asberry hit another short-range jumper — this time from the left elbow — to push Dexter ahead 20-10.

Following that, Asberry added to her total, as she rebounded a missed shot from Pullen and converted, to make it 22-10 and end the run.

Sikeston would stop the Dexter momentum, with 1:34 left, as Allen muscled her way into the paint and made a layup to cut the lead down to 10, 22-12.

Then after Dexter pushed its lead to 12 once more, at 24-12, Barnett made a driving layup to cut into the margin, with 58 seconds left.

Barnett added another basket just as time was winding down in the period after freshman Kirsten Fairhurst stole the ball and attacked the basket. She missed her ensuing layup attempt, but the ever-reliable Barnett was in the right place at the right time and rebounded the miss before putting it right back up for a layup to give the Lady Bulldogs some momentum to end the frame.

Nothing seemed to go the Lady Bulldogs’ way through the first 16 minutes.

However, after the first half, something clicked with Sikeston.

“It’s hard for a team to come out and shoot lights-out, like (Dexter) did in the first half,” said Sikeston head coach Alisha Wills on what she told her team during the break. “We struggled in the first half. So, we figured at some point; the momentum had to change. We’ve been in this same scenario several times now. The difference in who we were at the beginning of the season and who we are now is that we’re going to battle back. We’re going to fight. That’s been the biggest change.”

After Pullen hit a pull-up jumper to start the third quarter and make it 39-28, the Lady Bulldogs never let the lead get to double-digits for the remainder of the game.

The Lady Bulldogs responded after Pullen’s jumper, as Allen missed a layup, stayed with her shot, got the rebound, and connected on her second-chance opportunity to cut the lead to nine, 39-30.

Then, with 6:15 left in the third period, Barnett nailed a 3-pointer from the right corner to cut the Dexter lead to three, 39-36.

However, the Lady Bearcats answered right back.

After that, Barnett rebounded a missed 3-pointer from freshman Nayla Bonner and took it right back up for a layup with 3:25 left, to make it a one-point game, 42-41.

Dexter junior Karlee Keirsey then pushed the Lady Bearcats lead to four, as she hit a 3-pointer from the right-wing, to make it 45-41, with three minutes left.

Sikeston freshman Shania Hodges would then cut the deficit to two, 45-43 after she made a layup before Dexter ended the frame on an 8-2 run to take a 51-45 lead into the fourth quarter.

The back-and-forth contest continued into the final eight minutes as well.

After cutting the margin to five points, Barnett would make it a two-point game, 53-51, as the senior made a 3-pointer from the left wing with 6:19 left.

Allen then tied the game up, with 5:42 left, as she made a floating layup near the right block, to even the contest at 53.

Dexter, though, regained the lead with 4:52 left, after freshman Caitlin Giles made a short shot near the left elbow, that gave the Lady Bearcats a 55-53 lead.

Sikeston would then tie the game again right after, before Dexter regained the lead, once again, with 4:30 left, 57-55.

An Allen jumper in-the-paint then evened the game up once again, with 3:58 left, before Dexter took the lead back, 59-57.

Following Dexter’s answer, Barnett made a driving layup to tie the game at 59 with 3:34 left.

Eventually, the Lady Bearcats increased their lead to three points, 62-59 with 2:55 left, after they made a free-throw, while Pullen made a layup off a bounce pass from McBride.

Barnett, however, showed no signs of tiredness, as she would go in full-attack mode once again, with 1:50 left, after she made a layup while driving to the basket to make the game 62-61.

A pair of freshmen would then make some big plays down-the-stretch, as Sikeston took it’s first lead since the first quarter, 63-62 with 1:42 left.

On the next possession for the Lady Bulldogs, Fairhurst missed a short jumper, but Bonner was there to collect the miss and went up strong with her attempt while drawing a foul in the process.

Going to the line, Bonner said she was nervous but still managed to push that aside and make both of her shots from the charity stripe.

“Coach Wills told me that I have to trust myself,” Bonner said. “Think about the things that we work on, and it will go in.”

Dexter would regain the lead, once again, with 54.1 seconds left, after Pullen made a pair of free-throws, to give the Lady Bearcats a 64-63 lead.

Barnett then grew the lead to two points, after converting a layup, with 25 seconds left, before Dexter cut into the lead after senior Alexa Werneck split a pair of free-throws, with 11.2 seconds remaining.

Werneck is the lone senior on the Dexter roster.

“I’m so proud of her,” Dexter head coach Eric Sitze said. “I’m so happy she came back and played for us this year. She’s been a great scorer for us; great leader for us this year, and we’re going to miss her a lot next year.”

Heading into Saturday, Sikeston was without a key contributor to the lineup.

Starting guard, Amyari Blissett did not dress due to illness, but Wills hopes that she will be healthy to play in the Lady Bulldogs game on Monday night.