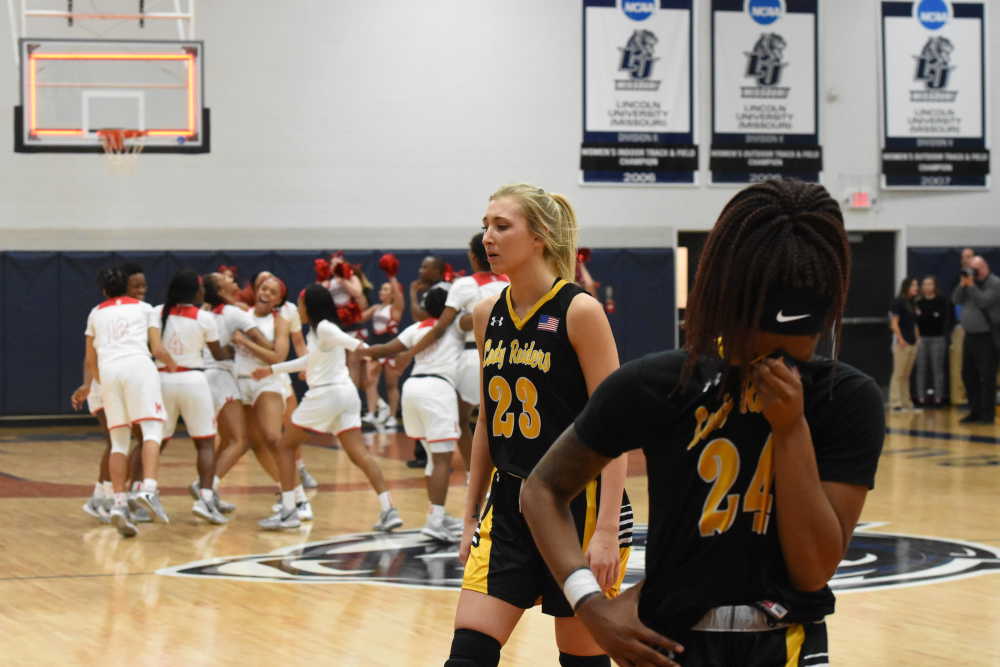 Three Rivers spent all game trying to erase a difficult start. Though the Raiders rallied from 15 points down to beat Moberly Area last year under similar circumstances, this time it wasn't to be and the Raiders lost 83-70 in the Region XVI Championship on Saturday in Jefferson City, Mo.

The loss marks the end of Walk's 32-year career, the last 12 at Three Rivers and 20 before that at Twin Rivers High School.

"It's been a fun 32 years. I wouldn't want to finish any other way than with the group I finished up with," Walk said. "I told them in the locker room, thanks for allowing me to be around. They could have picked any other college in the country. They are that good. I'm just fortunate enough to be along for the ride."

Jordan Little had 14 points to lead Three Rivers after going 11 for 14 on free throws. Deanay Watson and Katelyn South each had 11 points.

Those sophomores were a big reason Three Rivers went 19-1 in regular-season, Region XVI competition the past two seasons, 3-1 in the region tournament, and four of the five sophomores were part of a team last year that took Walk to the program's first national tournament appearance in 2004.

The Raiders were insulted when they were given the 24th seed, the bottom seed, in the tournament. Then they took No. 9 Jones to the wire before losing by four points.

In the summer, Walk made it official that he was going to retire after the 2019-20 season. He and co-head coach Alex Wiggs brought in another talented recruiting class that included local standouts Autumn Dodd and Chaylea Mosby. The coaches added three players 6-2 or taller, the Raiders' lack of size was a vulnerability at the tournament.

The Raiders weren't just going to make it back to the national tournament, they were going to win it all.

A little more than a minute into the game, Moberly Area's Chatori Tylor banked in a 3 high off the glass from near the corner. It marked back-to-back 3s for her to start the game and put Mineral Area ahead by two.

It was tied at eight a couple of minutes later, then the Greyhounds went on a 17-1 run over the next 4 1/2 minutes and Three Rivers never got within 11 points the rest of the game.

"You have tip your hat to Moberly. They played pretty good defense and their press kind of affected us. We just could never get out of that first quarter," Walk said. "They pushed (the offense) out a little bit farther than probably what we are used to running."

Deanna Wilson had 20 points and 14 rebounds to give her a double-double in all four games against the Raiders this year.

Three Rivers (26-6) shot 9 for 29 (31%) in both halves. Three Rivers missed its first 10 3-point attempts while Moberly made its first two, including Taylor's bank shot, which was also her final 3 of the game.

"The magnitude of this game, I've see a lot of games where if you don't make those first 2-3 shots ... when Tylor hits that corner 3 off the glass, that gives them all kinds of confidence and from there they took off and we kind of lost our (confidence)," Walk said. "Once we settled down, I thought we played OK. Just those five or six possessions in the first quarter where they got that lead and we never could chip into it."

After allowing 30 points in the first quarter, Three Rivers allowed 31 points combined over the next two quarters, but during that time the Raiders, the third-highest scoring offense in the country, never found their trademark momentum where they put up points in bunches.

"I feel like we should have had jump balls and we were getting fouls called. It kept happening to us. The layups and the fouls we were trying to get but they weren't calling it," Pettus said. "The same thing that happened at Moberly last time."

Chaylea Mosby made the team's first 3-pointer with 30 seconds left in the second quarter, which also set the halftime score at 45-33.

It was a similar story last year. Moberly scored the first 11 points as Three Rivers went scoreless for the first 5 minutes and 24 seconds. The Raiders were down by nine at halftime and as much as 15 in the game.

Last year, Three Rivers settled down and took its first lead with 3:33 left in the third quarter as Moberly's shooting percentage from 3 plummeted to 33%.

A year later and back on the floor for the third quarter, down three more points than last year, Three Rivers didn't get its first field goal in the second half until Autumn Dodd got a steal and a layup with a minute left in the third quarter. She followed that with a 3 not 20 seconds later and shouted "Let's go!" with the Raiders down by 17.

"Last year, we were making those shots once we got relaxed. This year we didn't," Walk said. "I'm sure (Moberly) talked about that game the entire year with the sophomores ... That was probably a topic of conversation in the Moberly locker room."

Moberly put Wilson back in the game with four fouls, and the Greyhounds didn't attempt a field goal for the final 5 minutes of the game.

Three Rivers pressed relentless, but were called with too many fouls and couldn't get closer than 13 points.

"If you can get the effort out of the kids, you can't ask for anything more," Walk said.

With 48 seconds left and the Greyhounds up by 16, Moberly Area called its final timeout to put in its bench. Walk brought his team together and as he spoke, brought several players to tears.

"I didn't say a whole lot. The only thing I asked them is 'Do you want to have a little fun?' So we shot a couple of shots down late just for the heck of it. They played their hearts out this afternoon. We just didn't make enough shots," Walk said.

Added Watson, Walk's third-year sophomore, and leading scorer, whom he told when she signed that they were going to win the 2020 national championship together, "We knew it was coming to an end so all the emotions just started coming out."