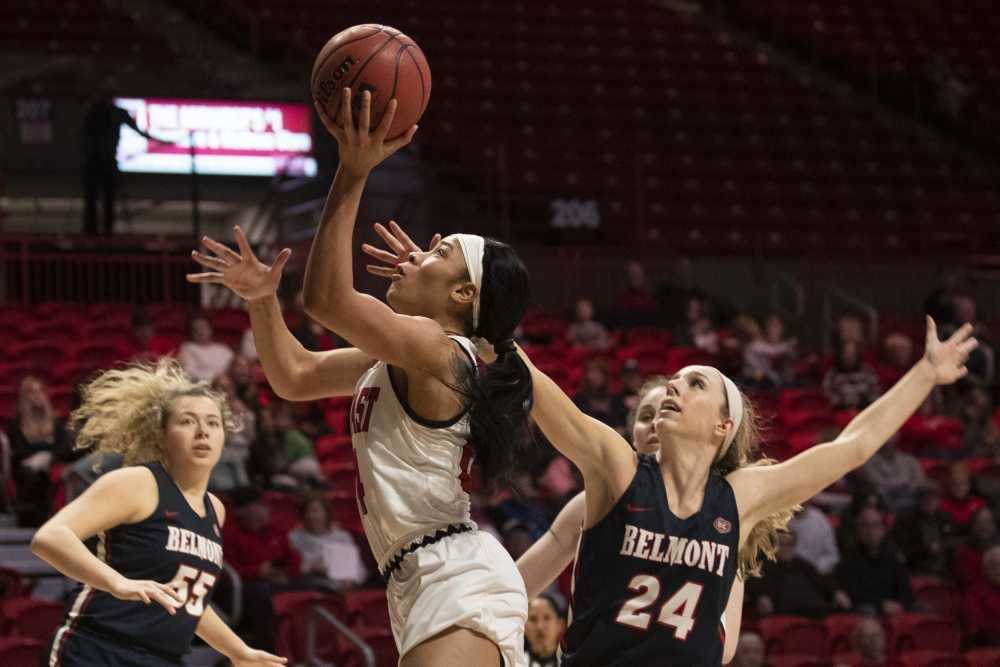 Southeast Missouri State knew it had to stop Ohio Valley Conference-leading scorer Chelsey Perry and couldn’t do it this weekend, as visiting SEMO (22-7, 14-4 OVC) lost its final regular season game to UT-Martin, 78-72.

Southeast split the series with the Skyhawks this season, as SEMO defeated UT-Martin, 71-69, at the Show Me Center Feb. 13.

Perry had the touch

Perry, who scored 36 points in the initial tilt against Southeast, dropped 38 points Saturday on the Redhawks, overshadowing Carrie Shephard’s 22-point performance, as the Skyhawks clinched a share of the regular season OVC title.

UT-Martin (20-9, 16-2) will be the top seed in the upcoming league tournament later this week, by virtue of the Skyhawks easy home win over co-OVC leader Belmont, 74-57, on January 11.

Southeast, which had clinched the No. 3 seed, will stay in this position as it faces the No. 6 seed, Tennessee Tech, Thursday at 3:00 pm in Evansville, Indiana.

Redhawks uneven down the stretch

The Redhawks limp into the postseason, going 2-for-2 in their final four contests after previously putting together 11 consecutive victories.

UT-Martin jumped out to a 6-0 lead thanks to treys by Dasia Young and Kyannah Grant.

Southeast got within one, 21-20, at the end of the first quarter. By intermission, the Redhawks were down by a basket, 37-35.

Shephard’s scoring from beyond the arc kept SEMO in the contest as the redshirt senior from Steele, Missouri nailed five of her six 3-pointers by halftime.

Rekha Patterson’s squad trailed the entire game until going ahead for the first time, 64-63 on Denisha Gardener’s bucket with 6:24 remaining in the contest.

SEMO would hold the lead for 12 seconds as Perry, one of the semifinalists for Becky Hammond Mid-Major Player of the Year recognition, quickly hit a jumper to regain the advantage.

A minute later, Southeast went up 66-65 thanks to a pair of free throws by freshman Roshala Scott.

UT-Martin, following Scott’s visit to the charity stripe, outscored SEMO 11-6 to finish the game, with Patterson’s crew missing on 10 of its final 11 field goal attempts.

“Unfortunately, we didn’t make enough plays down the stretch,” said Patterson, who is 77-72 in her fifth year at Southeast.

“(UT-Martin) is really good when Perry gets hers,” added Patterson, “but really tough when their role players get theirs too – and that’s what happened today.”

The Skyhawks have long been a tough out.

“We got in foul trouble in the second half,” said Patterson, noting that junior star Tesia Thompson sat for important stretches of the fourth quarter.

Thompson, the Redhawks’ leading scorer and third in the OVC, would foul out with 21 seconds left.

“We were way more disciplined defensively in the second half,” said Patterson.

The numbers may not bear out that interpretation, as UT-Martin’s Perry, who had just 12 points by intermission, had 26 after halftime.

No fatigue for the winners

UT-Martin coach Kevin McMillan apparently does not worry about resting his starters, as Perry, Maddie Waldrop and Kyannah Grant played the entire 40 minutes for the winners.

“A huge shout out to Roshala Scott,” said Patterson after the game at Elam Center in Cookeville, Tennessee.

“She made an impact with her defensive intensity,” noting the freshman from Earle, Arkansas, came off the bench to go 4-for-4 from the field and 4-for-5 from the foul line in racking up a dozen points.

Patterson wanted her 14-member team to outrebound the Skyhawks, and it did, 38-27.

Southeast led for only 1:12 in the game and both teams were tied three times, all after halftime.

“Our goal is to win (an OVC) championship,” said Patterson, 41, “and we’ve put ourselves in a position to do this over the coming weekend in Evansville.”

Taelour Pruitt, who rolled an ankle and did not play Thursday at home against Eastern Illinois, got 30 minutes against the Skyhawks, scoring seven, including two treys.