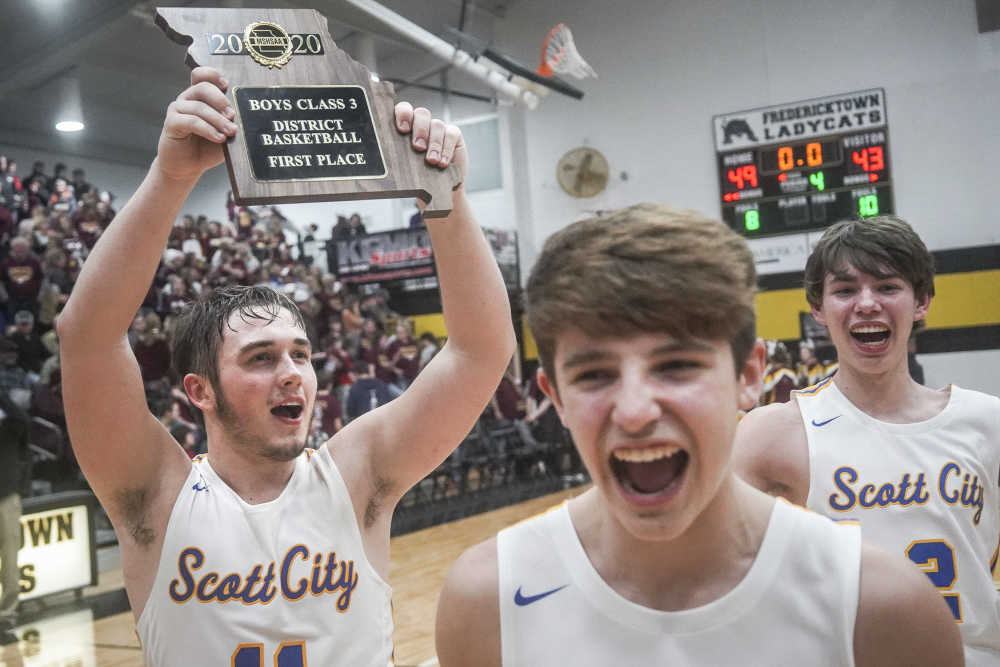 FREDERICKTOWN – Spencer Stratman has gained a lot more knowledge through his four years as a student at Scott City High School than just in the classroom.

The senior athlete has also learned how to succeed – by remaining calm under pressure – regardless of the sport he is competing in.

“He’s been doing it for so long,” veteran Ram football coach Jim May said. “This is not new to him.”

What May was talking about Friday was Stratman’s ability to deliver when his team needed it the most, which is exactly what he did in the second half of Scott City’s Class 3 District 2 championship basketball game against rival Kelly.

Stratman proved to be the difference at both ends of the floor, as the Rams got past the Hawks 49-43 to win the program’s first District title since 2012.

The game was a defensive struggle throughout the first half, as neither team could find any scoring rhythm and the Hawks (19-10) led just 17-16 at the intermission. However, Stratman took the reins of his team’s offense into his hands post-halftime to give his team the spark it needed.

As they have for years on the football field, Stratman and classmate Joe Panagos teamed up to key the success of the Rams.

In football, Stratman was the Rams’ quarterback who threw completion after completion to wide receiver Panagos and led Scott City to its first District title last fall in over a decade. On Friday, the two reversed course.

The Rams’ perimeter players fed Panagos the ball on the post and when he found himself covered, he kicked it out to Stratman at the 3-point line and the 5-foot-9 guard buried jumper after jumper.

Stratman hit his third 3-pointer late in the period to put Scott City (20-8) up 31-26 and Kelly was playing catch-up the remainder of the night.

“He’s been in these championship situations in baseball and football,” May said of his quarterback, “this isn’t new to him.”

While Stratman was drilling jumpers, junior Camden Conner was scoring on those too, but also drives to the bucket.

“He’s 6-3 and pretty athletic,” Scott City coach Mark Dannenmueller said of Conner following the Rams’ semifinal win over Saxony Lutheran. “He’s really smart. He’s really skilled. It’s one of those things, you can keep him in front of you, but he’s 6-3 and can elevate right over the top of you.”

Conner scored half of his team’s first-half points and finished with a team-high 19.

The Hawks trailed 38-29 early in the fourth quarter, but four different Kelly athletes delivered in a 10-2 run, including the final five from junior Bryce Morgan to close the gap to 40-39.

Holding a 44-41 advantage with just over a minute remaining, Scott City got a huge defensive play from Stratman. He jumped a passing lane and picked off a Hawk pass and sped down the floor to lay it in to put his team up 46-41 and give it the breathing room it needed the rest of the way.

“I try to stay calm and know that there is always going to be another play,” Stratman said.

The loss closes a tremendous season for Kelly.

The Hawks hadn’t enjoyed a winning season in over a decade and had an eight-game win streak going entering Friday’s battle.

The victory adds another chapter to what this senior class at Scott City has achieved.

Over the past four seasons, the Rams baseball program has won 66 games, a pair of District championships, and finished third in the state.

In football, Scott City has had three winning seasons and a District title, while in basketball, this was the third winning season in the past four years.

“We all work our butts off,” Stratman said of his class. “Every single second and every single day.”