DECADE OF DOMINANCE: Charleston pressure too much for NMCC as Bluejays win 10th straight district title 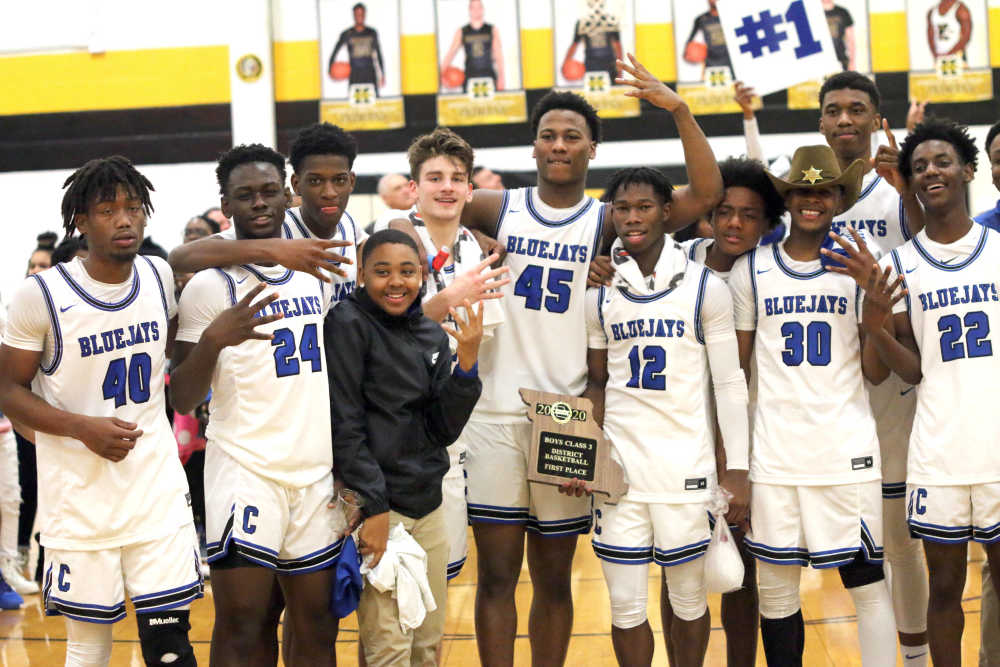 KENNETT, Mo. — Charleston hasn’t felt the sour taste of defeat in a district tournament in quite some time.

“We know what time it is when it comes district time,” Charleston head coach Danny Farmer said. “We play hard, and we talk about it all the time going into the postseason. We knew going into this game that if we win, we were into the first round of the state playoffs. That’s the motivation and then knowing that we’ve won districts so many times in a row. No class wants to be the class to lose.”

Despite a lopsided outcome, the beginning of the game was a lot more competitive.

Senior Terridean Bogan got the Bluejays on the board to start, after draining a 3-pointer from the right corner, to give the No. 1 seed a 3-0 lead with 7:18 remaining.

Then, with 5:45 left, senior Isaiah Gillespie stole the ball near half-court and took it right to the basket for a layup to make it 5-0.

NMCC sophomore Shamar Williamson would then score the first points for the Eagles, with 5:02 left in the first quarter, after getting his floater to drop, to make it 5-2.

Senior Blessin Kimble would then push the Charleston lead to five, 7-2, on a pair of free-throws before NMCC junior Donnie Ray Brown found senior Christen Phillips underneath the basket for a wide-open layup. His layup cut the Charleston deficit to three, 7-4, with 3:34 remaining in the frame.

Adding on to his basket, Phillips made it a one-point game, with 56 seconds to go, after driving from the left-wing and converting a layup to make it 7-6.

Kimble would then split a pair of free-throws before Phillips ended the quarter with a mid-range jump shot from the free-throw line to tie the game, with 12 seconds left. Phillips led all scorers with 24 points.

After a back-and-forth first eight minutes, the second quarter proved to be the exact opposite.

Charleston found its groove to end the first half, outscoring the Eagles 23-11 in the period.

NMCC started the frame off by taking its first lead of the contest, after Williamson hit a mid-range jumper, making it 10-8, with 7:19 remaining.

From there, Charleston got into a rhythm.

With 5:47 left, Bogan knocked down a tough fallaway jumper to push the Bluejays ahead 14-10, before Eagles senior Ansel Underwood cut into the deficit, by making a driving floater. Underwood’s shot made it 14-12, with 5:10 left.

Phillips then made it a one-point game again, as he cut to the basket for a layup after Williamson found him while getting double-teamed, to make it 15-14, with 4:15 left.

However, Charleston didn’t allow NMCC to get much closer than that margin shortly after. The Bluejays went on a 16-5 run to end the half.

Freshman Rico Coleman — who had a strong night for the Bluejays — ended the half with a bang.

After Kimble blocked Phillips layup attempt, the Bluejays turned defense-into-offense, as Coleman ignited the Charleston crowd with a slam dunk to push the Bluejays ahead by 12, 31-19.

Coleman finished with 20 points on 7 of 10 shooting and eight rebounds. He also went 6 of 9 at the charity stripe.

“We’ve been developing him the whole year to come up around this time and help us,” Farmer said. “Now, he’s here, and I thought he played a tremendous game. He did exactly what I expected for him to be doing. He’s a very good player as a freshman.”

Five Charleston players finished in double-figures on the night.

Outside of Coleman, Kimble had 14 points on 5 of 9 shooting, and secured a double-double, with 12 boards. He had four blocks to go with his stat line as well.

Phillips was the lone Eagle player to reach double-digits in scoring.

“I can’t say enough about them,” said NMCC head coach Lennies McFerren on his senior class. “I’m proud of them, every last one of them. That’s what we were talking about in (the locker room). I will sleep good tonight, knowing that they battled and gave everything they got.”

Tipoff is currently at 7:45 p.m., at the Bearcat Event Center in Dexter.