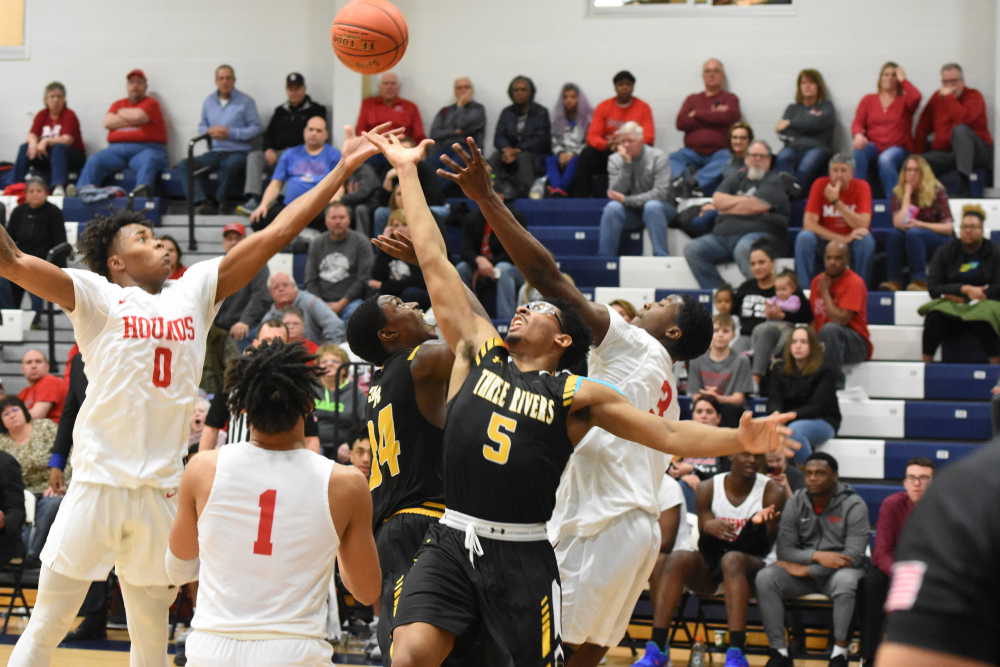 Gene Bess wanted more. So did the Raiders.

"Our kids, one thing is they weren't going to quit. That's kind of a motto we've had around here, is Raiders don't quit," Bess said.

"I still remember playing Southern Idaho in the national tournament. They had us down, I think 21 points at halftime. I remember hearing the crowd chant 'Raiders Don't Quit.' We went back out there and won by about eight ... That's what I want to rebuild and regain. We've got a beautiful gym, a great administration, some good freshmen coming back. I want to be the team people are looking at. We were that for many years."

That's 26 wins a year in a place where at best, Bess gets a player for two seasons. Three if you count a redshirt season worth of practices.

The Raiders last went to Hutchinson, Kansas for the tournament in 2012. They last won the region in 2017 but lost to Highland (Ill.) in the District 4 playoff at the Bess Activity Center.

Moberly Area retook the lead with 13 1/2 minutes left and kept a four-point or less lead for the next 4 minutes. It briefly went up by six, but then Brahm Harris, who had 13 points, swished a 3 to cut it in half.

"We had been beaten twice handily by (Moberly) and I think some of our players felt we were battling pretty great odds," Bess said. "I like our kids. I think if we had another 2-3 weeks, we'd be right in the hunt for this tournament, but life doesn't work that way. There are no do-overs and we only had one shot."

The Raiders committed a pair of turnovers that led to five points either way and an eight-point deficit with 8 minutes left, their largest of the night up to that point.

A few possessions later, Dusan Mahorcic, who led Moberly with 15 points, putback his own shot off a loose rebound and was fouled on the play. His three-point play put the Cardinals up by 11 with 6 1/2 minutes to go, the first double-digit lead of the game, and the Raiders were called for traveling on their following possession, and Dezi Jones buried a 3, giving the Greyhounds a 15-4 run.

Three Rivers immediately responded with a 9-0 run that cut the lead to six points, but with 15 seconds left, it wasn't enough.

"Definitely a little sad. I feel like I gave it my all in my years being here," third-year sophomore Willie Lucas said. "I feel like I wouldn't want to do it with anybody else. I feel like I ended up on a bad, but good note. I had great friends, great teammates, great coaches, and I love where I'm at."

There were three times and five lead changes in the first half, and the biggest lead was six points.

Hodges and Lucas scored the first two baskets of the game for the Raiders, and Moberly took its first lead about 5 minutes in, only to have it taken right back.

Cortez Mosely put back his own shot for another lead change at the 10-minute mark. The Greyhounds pushed the lead to six after Mosely scored with 3 1/2 minutes left.

Jones and Mosley both had 14 points.

The Raiders scored a quick five points after Hayden Sprenkel made a 3 and Kinyon Hodges got a layup off a turnover, leading to a Greyhound timeout.

Willie Lucas tied the game at 34 with 50 seconds left, but Juwon Carpenter made one more shot to put the Greyhounds ahead at the break.

"Before the game started we all said we had nothing to lose," Lucas said. "We gave it all we had."

In the opening minute of the second half, Tallon Fonda, who had 10 points, lept over a defender's head at the other end, but couldn't finish the dunk. He tried to convert it to a finger roll, missed, and Jay Hines was there for the putback.

A few minutes later, Dionte Raines, who led the Raiders with 14 points, swished a 3 to put the Raiders ahead.

Moberly took the lead for good with 13 1/2 minutes left and was up by 16 about 8 minutes later.

"All I ask of my players is that they really zero in," Bess said. "I tell them many times during the season that they will regret lack of effort, lack of focus more than anything. They have to give it their best shot and we will take what happens."