Neelyville turns up heat on Hayti to claim district championship 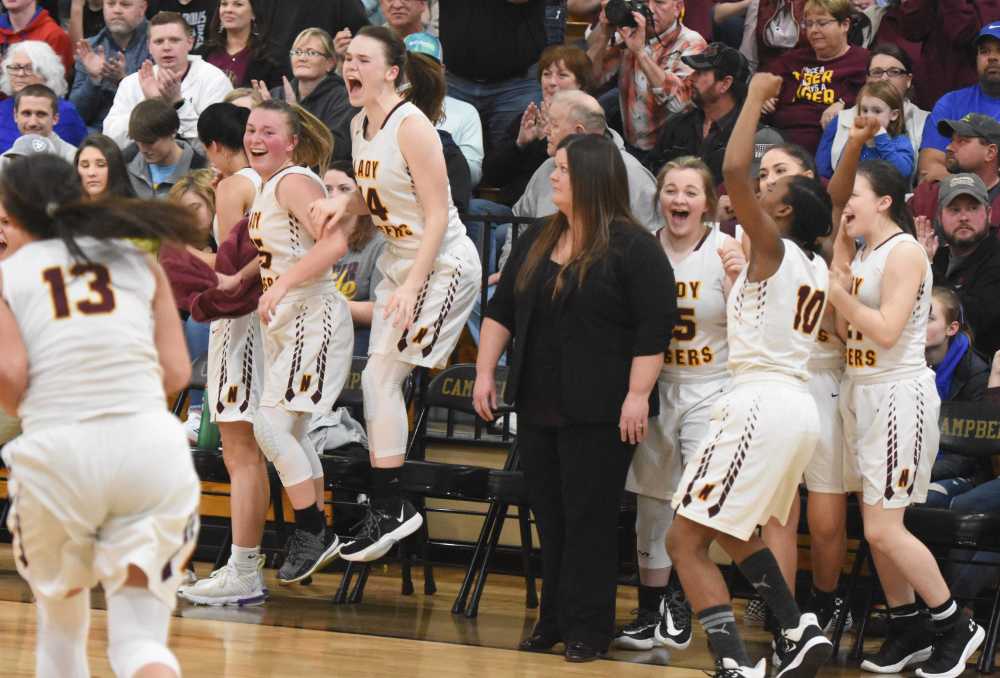 CAMPBELL — Lexi Liau's protective mask was fogging up but it was a good sign for the Neelyville senior and her teammates.

A packed gym at Campbell High School turned into a crucible and the Tigers were able to turn up the pressure over the final half quarter Friday night.

Neelyville scored 20 of the final 26 points to turn a nail-biter into a runaway 81-64 win over Hayti in the MSHSAA Class 2 District 1 championship game.

They only needed the edge as a fast-paced game of runs eventually got the best of the defending district champs.

After falling in the district final a year ago, the Tigers are back in the state playoffs for the 14th time.

"It means a lot because I love my team, I love my teammates and we put in a lot of hard work and effort," Neelyville senior Bailey McGruder said.

Neelyville (20-6) will play defending state champion Thayer (16-8) at 6 p.m. Wednesday at the Libla Family Sports Complex at Three Rivers College in the sectional playoff. It will be a matchup of the last two Class 2 champions and a rematch of a district final from last year.

"We just want to keep playing as long as we can," Hale said.

Liau scored 22 points to lead Neelyville, scoring eight in the fourth quarter while Payton Reinbott scored 11 of her 17. Makenzie Davis added 16 points while McGruder chipped in 13 with all but four coming in the second half after early foul trouble.

Hayti (18-6) trailed the entire second half but never more than nine points until the final two minutes.

In what felt like a bad omen for Neelyville fans, Johnson banked in a shot from a few feet inside halfcourt at the end of the third quarter.

It set up a frenzied fourth with Neelyville up 54-53.

Hayti pulled within three at the midpoint but Liau got a putback then picked off a pass leading to a layup. After the teams traded baskets, Davis rebounded a missed 3-pointer by Hayti and turned it into a fastbreak with Reinbott finishing on the other end.

Liau and Reinbott scored consecutive baskets and, after a Hayti foul shot, Davis scored off a pass from Reinbott in the paint for a 75-61 lead and 71 seconds left.

"We just knew we had to get the ball back and get it rolling," Liau said

Hayti put together the first run when Johnson sank a 3-pointer to break a 4-all tie. Stemaiya Robinson followed with another before Johnson's steal and layin put the Indians up 12-4.

Liau answered with a drive through traffic down main street and later knocked down a 3-pointer off a pass. Her steal then led to Reinbott's layin that made it 12-11.

Davis missed consecutive shots in the paint but rebounded each time and her third attempt fell in as she was fouled. McGruder was then fouled rebounding the missed free throw and sank two foul shots for a 15-12 Neelyville lead.

Hayti tied it at 15-all before the first-quarter buzzer.

"We didn't start off the game very well on defense," Hale said. "And so we're just chasing our tails after that."

Johnson opened the second quarter with a steal leading to a three-point play as McGruder picked up her third foul. Johnson was called for her third with 4 1/3 left in the quarter.

"It's hard because I can't do anything about (sitting on the bench) but I talked to my team, they picked me up and they were working just as hard as I was on the floor," McGruder said.

Neelyville put together a 9-2 run that eventually led to a nine-point lead with 2:32 left in the half. The Tigers led 35-27 at halftime.

The teams nearly split 41 turnovers but Neelyville ended up with a 20-8 advantage in converting them into points. The Indians shot 36.6% in all and ended up minus-7 on rebounds.