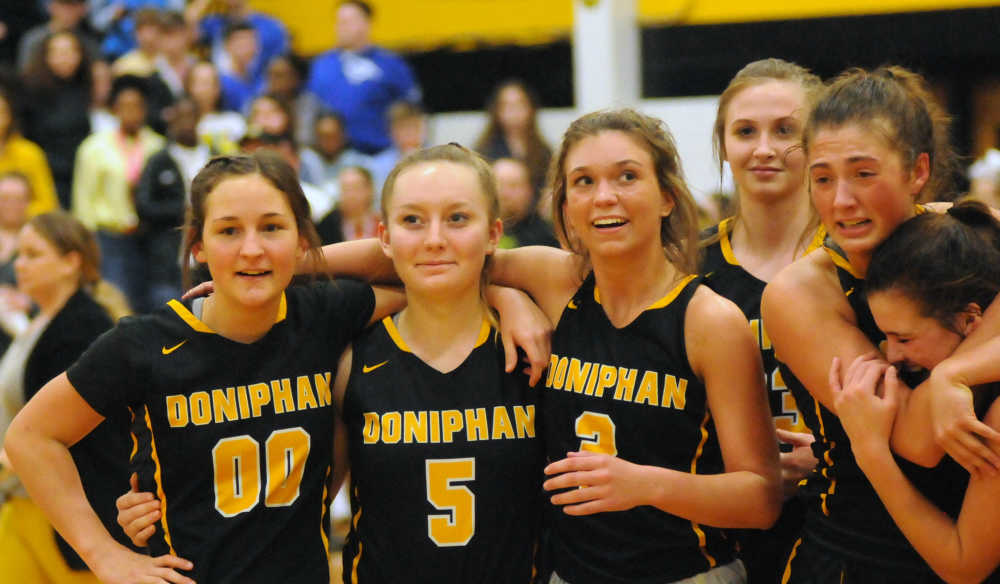 KENNETT, Mo. - A couple of minutes into the third quarter Doniphan Donettes coach Adam Epps elected to change defenses after the New Madrid County Central Eagles scored the first six points of the second half to pad its lead to 42-20. 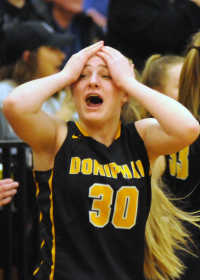 “We knew we had to do something different,” Epps said. “Guarding them one-on-one was not enough so we started trapping. Our kids did a great job of executing a defense we hadn’t even worked on much in practice. Once we started trapping we got some deflections and things started to go our way.” 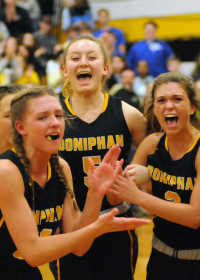 Doniphan managed to cut a 22-point deficit to 44-34 by the start of the fourth quarter and continued to enjoy success the rest of the way. No. 2 seeded Doniphan outscored No. 1 seeded New Madrid County Central 20-9 in the fourth quarter as it rallied for a 54-53 victory in the Class 3, District 1 championship at Kennett High School. 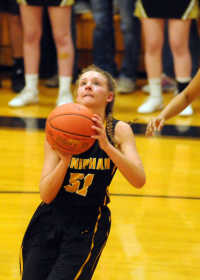 “Coming from behind 22 is pretty stinking exciting,” Epps said. “Our girls are a fun group to coach. At halftime, we talked about the fact we didn’t have much to lose down 16 points so just go play. Some young kids stepped up and got some deflections in the second half and we put together a great comeback.” 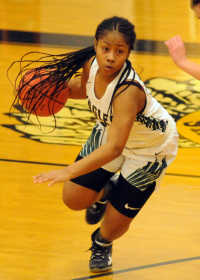 Doniphan trailed 53-40 when it burned its final timeout with 4:12 remaining. New Madrid County Central never scored again after the timeout. 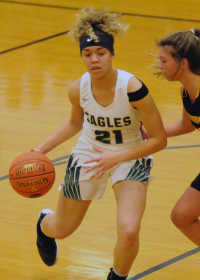 “Anytime there were timeouts we were always cheering people on,” Doniphan freshman Brooklynn Klepzig said. “We were always there for each other and just kept going.” 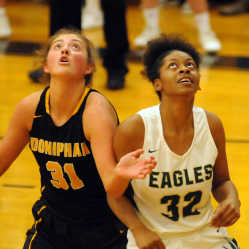 Doniphan took its only lead of the second half with six seconds remaining when Bailey Carson drove to the basket and made a contested shot.

“I told myself that someone has to do this,” Carson said of the game-winning shot. “I had been telling my team we’ve got this. It is in our hands. Then I ended up with the ball and realized it was actually in my hands and I had to push the ball and try to make a basket or get fouled.”

New Madrid County Central called a timeout after Carson’s field goal. The Eagles attempted to push the ball the length of the floor after the timeout and get a shot off but Doniphan deflected the ball near half court and time ran out.

“Ady Jones got the deflection at the end that iced it,” Epps said. “You count on seniors in moments like that. And after she got that deflection it was game over.”

New Madrid County Central built a 17-7 lead less than six minutes into the first quarter. Doniphan cut the deficit to 19-13 by the start of the second quarter and continued to trail by six at 21-15 with 6:16 left in the first half. The Eagles followed with a 15-5 run to pad its lead to 36-20 by halftime.

The Eagles’ offense tallied hit 13 of 16 free throws before halftime but made just three of eight shots from the charity stripe in the second half.

“We can guard,” Carson said. “We just had to get the nerves out. We had some players step up on defense tremendously in the second half.”

“Our main scorers didn’t score as much tonight,” Epps said. “But other girls stepped up. That’s what a dangerous team does this time of the year.”

Juniors Alivia Hartman and Ayannah Ruff paced the Eagles with 19 and 14 points respectfully. Hartman scored 15 points before halftime and Ruff tallied 11 of her points before the second half.

New Madrid County Central finishes its season with a record of 20-7. It graduates one senior - Shaniah Word.

It is the first time Doniphan has won a district title in girls basketball since 2007.

“This is amazing,” Klepzig said. “We work so hard as a team every day in practice. We’ve ran around the softball field 15 times in the rain. We worked so hard to get to this spot and I just knew we could do it tonight.”

“It’s crazy,” Klepzig said. “I cannot explain it but we are also so happy and ready for the next round.” 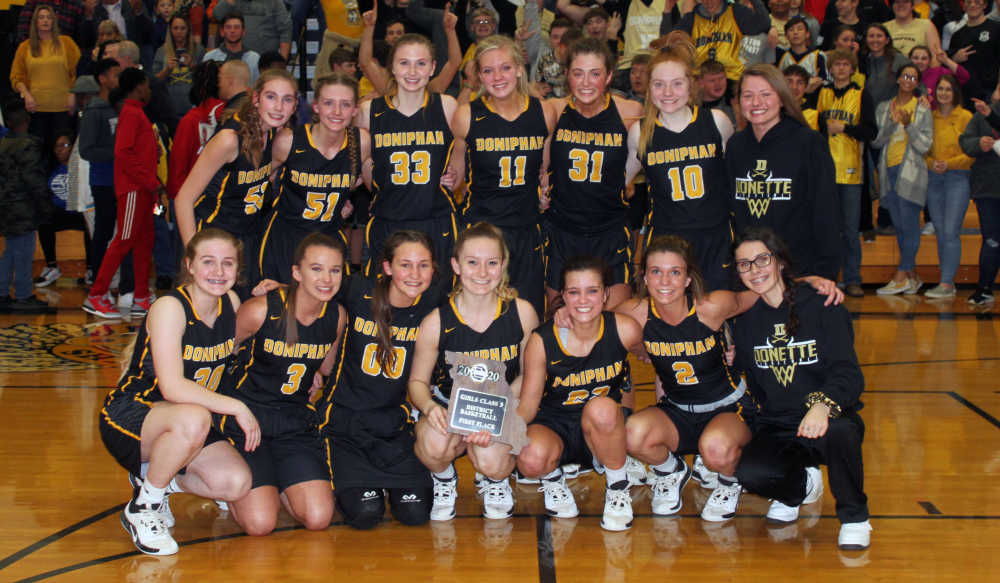