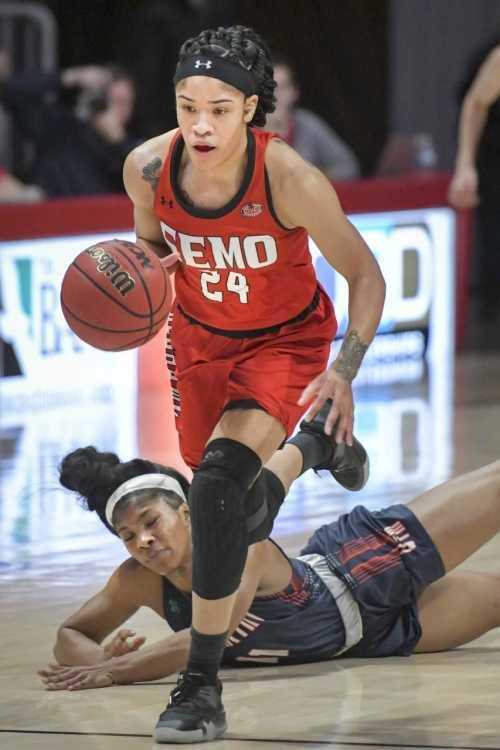 For the Southeast womenĺs basketball squad, the Ohio Valley Conference tournament has grown very large in the windshield.

The Redhawks (22-6, 14-3 OVC) have clinched the #3 seed in the March 4-7 league tournament but have one remaining regular season obstacle to overcome.

For the second time in 16 days, SEMO will play current OVC #2 seed UT-Martin (19-9, 15-2) Saturday in Cookeville, Tennessee Ś a game that concludes the regular season for both teams.

Itĺs a consequential contest for each.

A win, a better seed

If Southeast wins, the Redhawks move into postseason play as the #2 and would play the #7 seed in Evansville, Indiana Wednesday afternoon.

If the Skyhawks prevail, SEMO remains the #3 seed, a spot from which they cannot be dislodged, and will play #6 seed Thursday.

Southeastĺs Tesia Thompson, the junior from Memphis, Tennessee, is third in the league in scoring, averaging 18.6 points.

Her redshirt senior teammate, Carrie Shephard, is fifth at 16.4 and has a league-best 82 three-point field goals in 2019-20.

Rekha Pattersonĺs team has already beaten UT-Martin, a narrow 71-69 escape at the Show Me Center Feb. 13.

This time around, the Skyhawks will act as host with a lot on the line.

Chelsey Perry, the OVC leader in scoring, is averaging 23.1 points per game, a full four ppg better than Ellie Harmeyer of Belmont.

Perry and Harmeyer were recently named two of the ten semifinalists for the Becky Hammon Mid-Major Player of the Year award.

Perry turned in a masterful 36-point performance against Southeast her last time out.

ôNo one has stopped (Perry), said the 41-year old Patterson. ôBut we canĺt just focus on her if we want to win because Maggie Waldrop (the OVCĺs 10th leading scorer at 12.5 ppg), Kyannah Grant and Brittni Moore have all put up numbers lately.ö

Patterson, in her fifth year with SEMO, saw her team take its collective foot off the gas a bit in Thursdayĺs 72-56 Senior Night win over Eastern Illinois.

ôWe didnĺt stay as aggressive in the second quarter,ö said Patterson, whose overall coaching mark is 77-71.

The Skyhawks and Redhawks are separated by just a game in league play with SEMO sporting the better overall record.

Patterson, who sees defense as the identity of the team, is hopeful the Redhawks will win the rebounding battle at both ends of the court.

SEMO may have to play again without guard Taelour Pruitt for a second consecutive game. The sophomore turned her ankle and missed Thursdayĺs matchup with EIU.