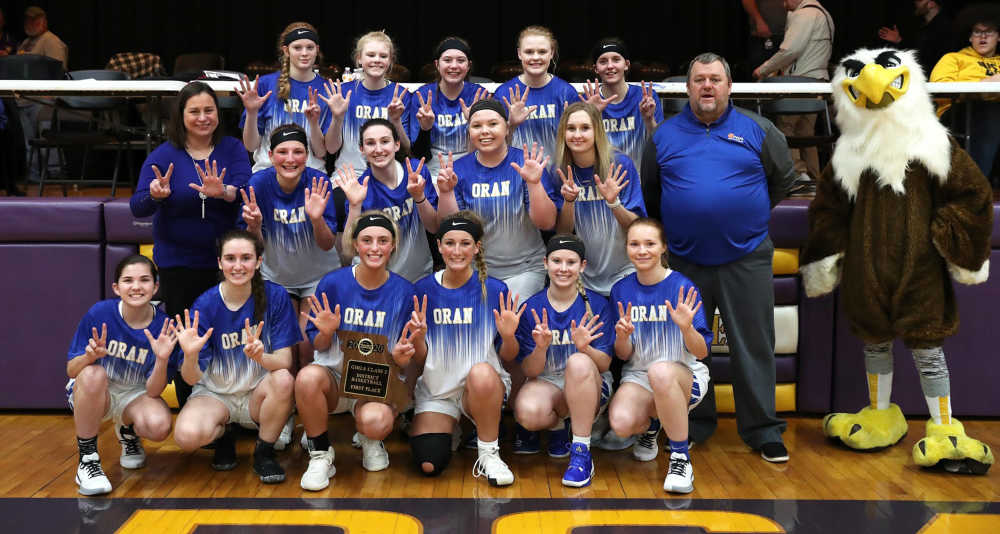 The Oran girls basketball team poses for a picture after defeating St. Vincent, in the championship game of the Class 2, District 3 Tournament, at Bloomfield High School, in Bloomfield, Mo., on Thursday, Feb. 27, 2020.
Liza King/Standard Democrat

BLOOMFIELD, Mo – Not often can a team head into a district title game knowing they’ve handed their opponent a near-50 point loss less than a month ago.

That’s the exact situation the Oran Lady Eagles found themselves in, however, when taking on St. Vincent Thursday in the Class 2, District 3 championship game.

A dominant first half showed their first meeting was no fluke as the top-seeded Lady Eagles cruised to a 37-point halftime lead en route to a 61-32 final that gives Oran their seventh-straight district crown.

“It’s the first one I’ve got running the show,” Oran head coach Larry Boshell said. “I coached girls basketball several years ago, and we got to the championship game a couple of times and got beat. So this feels pretty good.

“All the credit goes to the girls, of course.”

In their last meeting, on Feb. 27th, the Lady Eagles left little doubt who was the better team in sending the Lady Indians home with a 72-23 loss.

The start of Tuesday’s championship game couldn’t have gone much better if Oran had scripted it.

A Taylor Lowes 3-pointer ignited a run of 15-straight points for the Lady Eagles to start the game.

By the end of the first quarter, Oran was already firmly in control, holding a 27-8 lead having already forced 10 St. Vincent turnovers while shooting 10 of 19 from the floor.

After allowing the Lady Indians to open the second quarter with a quick basket, the Lady Eagles shut them out the rest of the way to the half, scoring the final 20 points before heading to the locker room.

Oran held St. Vincent to 1 of 8 shooting in the quarter, thanks in part to speeding up the Lady Indians offensively and forced another nine turnovers to build a 47-10 at the midway point of the game.

While the final score, 61-32, was much closer than their last meeting, the outcome was never in doubt as the Lady Indians never got closer than 29-points, and Oran subbed-out liberally in the fourth quarter.

“We took the air out of their sails early,” Boshell said. “Our press was working. Our half-court defense wasn’t as good as I wanted, but we had a few mixups, and it’s part of what we’re working on.”

Hot from long-range all night, the Lady Eagles finished with eight 3-pointers, including six in the first half alone.

Kaylee Payne hit two on her way to a game-high 15 points while Lowe’s three 3-pointers helped her finish with 13 points on the night.

Katelyn Webb was the third Lady Eagle to reach double-digits, finished with 13 points aided by a 4 of 6 effort at the free-throw line.

“They were doing a good job of at least doubling (Webb) in the post,” Boshell said. “Sometimes I think they were trying to triple team her. If there’s doing that to her, our other girls are stepping up and hitting open shots.

“They stayed with that, and we kept hitting shots. I thought we moved the ball well offensively. We cut and moved to open spots.”