Delta girls made no excuses en route to championship 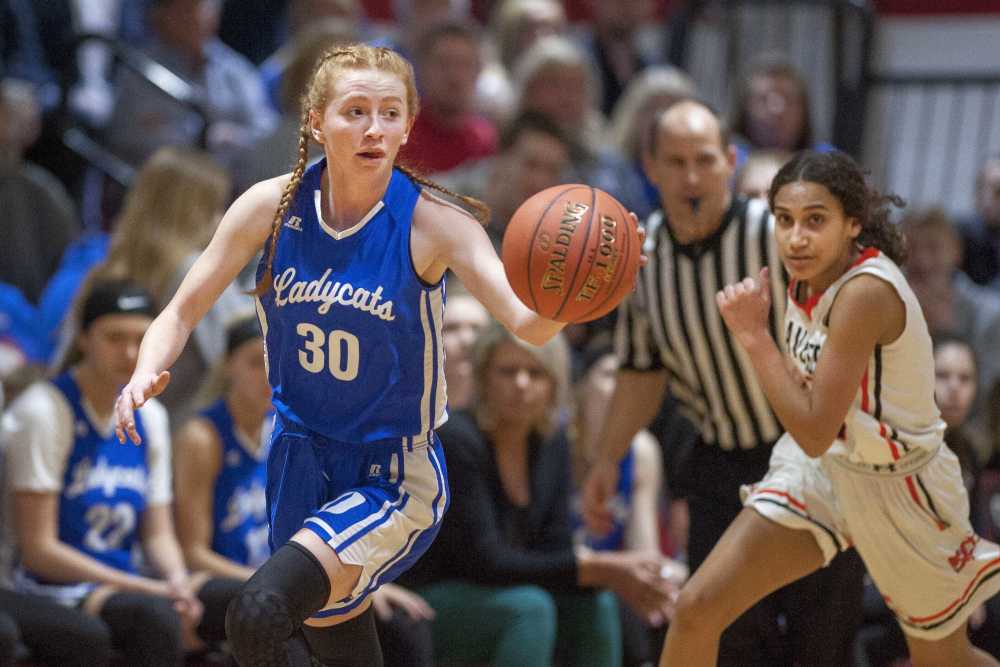 BELL CITY – If there was ever a team that had reason to call it a season – and accept that now just isn’t its time – it was the Delta girl’s basketball squad.

“We found out (Wednesday morning) that our leading scorer (sophomore Ashley White) had her appendix removed,” Bobcat coach David Heeb said. “We had two other kids in the hospital this week and had eight kids with the flu in the last five days.”

You couple all of that with the fact that Delta only has one senior (Coley Blattel) on its roster, and if Delta were to have lost in Thursday’s Class 1 District 2 championship game to Scott County Central, well that’s OK, there IS always next year for virtually this entire roster.

However, the girls of Delta would have nothing to do with excuse-making. The Bobcats methodically pulled away throughout the contest and beat the Bravettes 61-47. The victory was the first District title for the program since 2012.

“What these kids have overcome all year,” Heeb said, “they are just a hard-working bunch. We’re awfully proud of them.”

Heeb took over the program last season when the Bobcats were coming off a 2017-18 season in which it didn’t even field a team.

Delta finished 9-14 a year ago but began to make serious strides this season, despite the fact it has 12 freshmen and sophomores, no juniors and Blattel as the lone senior.

“It depends on how you look at it,” Heeb said of his team’s youth. I told them all year that we could look at the same picture in two different ways. We can look at it like we are the best (junior varsity) team in the country, we’re all freshmen and sophomores, or you can look at it like we want to be a good varsity team right now.”

The Bobcats chose the latter.

Delta opened the season with six wins in its initial seven games and never looked back, as it is one of 16 Class 1 teams still playing and its record is now 18-9.

“They are one of the hardest-working bunch of kids I’ve ever been around in my life,” Heeb said.

The Bobcats had split a pair of games with Scott County Central (17-7) this season, with both being decided by six points or less. Thursday’s contest was a different type of contest.

With White out, sophomore Kendall Holweg was dominant. She had 11 points in the opening eight minutes and had 16 by halftime.

As Scott County Central tried to foul its way back into the game late, went 6 for 6 from the free-throw line in the fourth quarter.

The Bravettes got a 5 for 7 performance from sophomore Micah Adams in the fourth quarter (she finished with a team-best 15 points), but Scott County Central missed 11 of 20 free throws on the night, which hampered its cause.

Freshman Lacey Blattel chipped in 12 points in the win, but Heeb had specific praise for her older sister.

“She is not going to go on to play college basketball,” Heeb said. “There is nothing in this for Coley other than she loves her school, she loves her teammates, so I am really happy for Coley. She didn’t have to come out for the team last year (after the program shuddered).

“No matter what we do going forward if we win state titles or whatever, we're always going to look back and say ‘Coley is the one that helped us get this going.’”