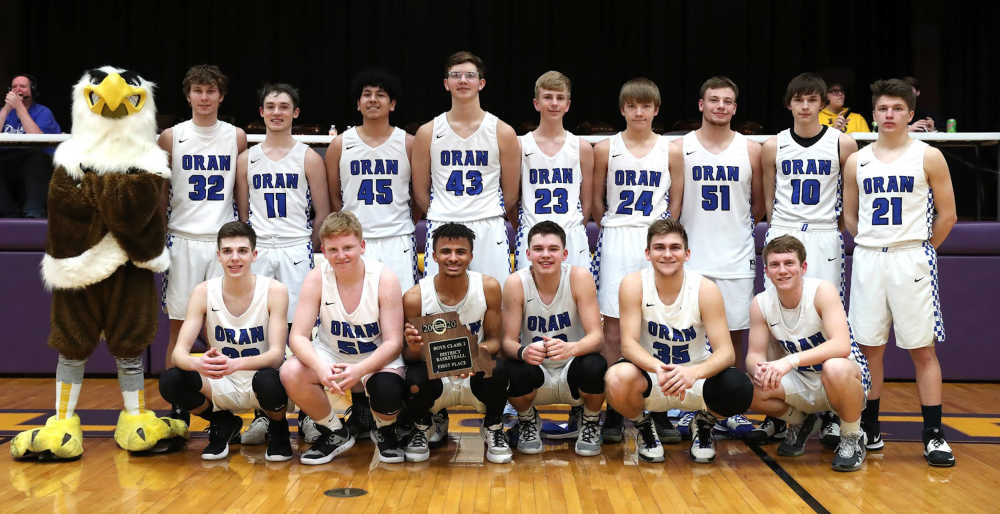 The Oran boys basketball team poses for a picture after defeating St. Vincent, in the championship game, of the Class 2, District 3 Tournament, at Bloomfield High School, in Bloomfield, Mo., on Thursday, Feb. 27, 2020.
Liza King/Standard Democrat

BLOOMFIELD, Mo. — A senior class of Todd Priggel, Tyson Goodale, and Kaiden Massey have never experienced a season at Oran without celebrating a district championship.

That streak continued on Thursday evening, at Bloomfield High School, as the No. 1-seeded Eagles defeated the No. 2-seeded St. Vincent Indians 61-48 to claim the Class 2, District 3 Tournament championship.

“Everyone’s special,” Oran head coach Joe Shoemaker said. “You can’t take anything for granted, because you never know how short life is going to be and God’s plan for you. Each team is a different team and has its personality.”

Not one Oran player left the floor with a frown on their faces, as the Eagles managed to stave off an Indians comeback, that saw them close the Eagles’ lead to four points, midway through the third quarter.

With Oran leading 27-19 at the break, St. Vincent didn’t show any signs of doubt.

Luke Brickhaus started the second half off with a bang for the Indians. The junior drained a three-pointer from the right-wing to cut the deficit to five, 27-22.

Oran, though, hit back-to-back three-pointers after that, to push it’s lead back to double-digits, at 33-22. Goodale made the first long-range jumper, from the left corner, while junior Cooper Priggel added a three of his own, from the left-wing.

Receiving the ball near the left baseline, junior Ty Johnson stopped the St. Vincent run, after he drove into the lane, spun around his defender, and got his floater to drop, to push the lead to eight, 35-27.

The Indians, however, returned the favor, as they scored the next four points quickly.

With 4:36 left in the third, Sauer went up for a layup, but in doing so, knocked down Oran junior Langdon Scheeter — who was then helped off the court by a trainer. Scheeter did return and finished the game for the Eagles.

Following that, Sauer went to work on the Eagles defense again, as he made a driving layup, which in the process, cut the lead to four.

That would be the final points that the Indians made in the frame, as Oran closed on an 8-0 run to head into the fourth quarter ahead 43-31.

“We got too passive and quit looking to score,” Shoemaker said. “We got to find that fine line between taking some time off and still looking to score. They made a good little run at us, they’re a well-coached team, and we knew they would.”

Goodale scored the first points for the Eagles, after driving to the basket and converting a layup. The Indians answered, though, after Alex Brickhaus knocked down a mid-range jumper to knot the game up, 2-2, with 4:20 left.

From there, Priggel made the first — of three — three-pointers to push the Eagles lead to three, 5-2.

Scheeter then followed that up by getting a look in transition off a turnover and driving toward the rim. As he went up for a shot, he drew the foul and headed to the line. He would make both of his attempts in the process, to push the lead to 7-2.

Alex Brickhaus ended the Indians’ drought after that, on a layup that cut the margin to three, with 3:17 remaining.

Scheeter, though, had an answer. With 3:06 left, the junior nailed a jumper from the left corner that pushed the lead to six, 10-4.

Continuing to battle, St. Vincent cut the lead to four, 10-6 after Luke Brickhaus made his layup attempt after an excellent bounce pass from Shawn Koishor underneath the basket.

Once again, though, Oran answered back after Priggel nailed his second three-pointer of the game to make it 13-6.

As the quarter was coming to close, St. Vincent cut the lead to five, as Alex Brickhaus attacked the goal and got his floater to drop, making it 13-8, with 1:11 left. Brickhaus finished the quarter with six points and led the team with 18 points.

Giving it to the hot shooter, Priggel got his chance to end the quarter in-style for the Eagles.

As time was ticking away, Priggel got his last-second three-pointer to drop, right as the buzzer sounded and give the Eagles a 16-8 advantage after the first eight minutes. Priggel finished with 16 points.

After the brief break, Oran pushed it’s lead to double-digits for the first time after Todd Priggel threw an outlet pass to a streaking Scheeter for a layup attempt. He drew the foul in the process and made both of his free-throws to make it 18-8, with 7:12 left in the frame.

St. Vincent, though, would go on a 5-0 run after that, as senior Garrett Dobbelare nailed a three-pointer from the right-wing and Sauer converted a layup to cut the Oran lead to five, 18-13.

A once slim lead, at the time, would turn into another double-digit contest for the No. 1 seed, as Oran went on a 7-0 run that ended with 3:52 left.

Johnson hit a three from the top of the arc, while Scheeter got a rebound and put-back to make it 23-13. Goodale then ended the run after making both of his shots from the charity-stripe that pushed the lead to 12.

The Indians would end the quarter on a 6-2 run, as Alex Brickhaus made a pair of free throws, junior John Wibbenmeyer made a driving layup, and junior Shawn Koishor spun around his defender and got a shot to go, to make the score 27-19, with 44 seconds remaining.

Sauer was the other St. Vincent player to reach double-figures in the scoring column, with 11.

Goodale finished with a game-high 20 points for Oran. He was also 5 of 5 at the free-throw line.

“At the beginning, I felt low,” Goodale said. “Wore out a little bit, but I started to progress a little bit and started to get in a flow, and my team was helping me out.”

Scheeter added 13 points and was 5 of 8 at the charity stripe.

For Todd Priggel, it was another game under his belt after a long time to recover.

Priggel finished with two points on a layup with 28 seconds left. He also provided a highlight-worthy play as he found Goodale underneath the basket for a layup off a behind-the-back pass that drew the attention of the heavy Oran crowd in attendance.

“It feels good,” Priggel said. “Finally back, and it feels good to be back. It’s good to play with all my friends again, and I’m glad to win another district championship.”