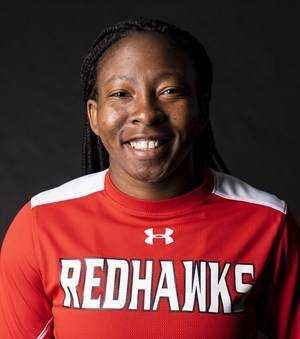 Southeast (22-6, 14-3 OVC) fell behind at the jump on Senior Night but by not more than three points.

The Redhawks went on a 13-0 run midway through the opening frame and never trailed again.

ôThe heart of this team is defense,ö said Jessie Harshberger, Southeast co-captain, who played 32 minutes and scored 13 points despite struggling earlier in the season to stay on the court.

The 5-foot-10 senior has seen limited time due to recurring pain and stiffness. The Dodge City, Kansas native was diagnosed last summer with an arthritic condition.

ôI felt great tonight,ö said Harshberger. ôI was so emotional but so happy with all the energy and love in the gym.ö

It was the last time the Show Me Center crowd got to see Shephard, a redshirt senior who will graduate with a masterĺs degree in May.

Shephard dropped 17 points on Eastern Illinois (17-11, 11-5) including a trey ľ the 81st three-pointer of the campaign, the highest single-season output in her storied Redhawks career.

Love from the crowd

Shephard, 24, smiled when told a fan called ôGo, Grandma!ö as she nailed a fourth-quarter basket to put the Redhawks up 64-47, their largest lead of the game.

A final bow at home

McCurdy, who graduated in December, has been on the sideline all season for Pattersonĺs squad due to an Achilles injury.

Southeastĺs Tesia Thompson led all scorers with 24 points, including four 3-pointers. She also led the team with eight rebounds.

Southeast was without the services of sophomore guard Taelour Pruitt, who rolled an ankle before the contest.

The Panthers were led by Karle Pace with 16 points. Lariah Washington and Abby Wahl joined her in double figures for EIU, with 13 and 12 points respectively.

The Skyhawks rolled over SIU-Edwardsville Thursday, 75-58.

UT-Martin and Belmont thus improve to 15-2 in conference play, each remaining one game ahead of Southeast with just the single contest left before the eight-team league tourney.

Shephard is bold enough to look beyond this weekend to the March 4-7 OVC championship tournament in Evansville, Indiana.

ôWe have the chance to go deep (in the tourney),ö said Shephard, ôand we want to take it to the end.ö