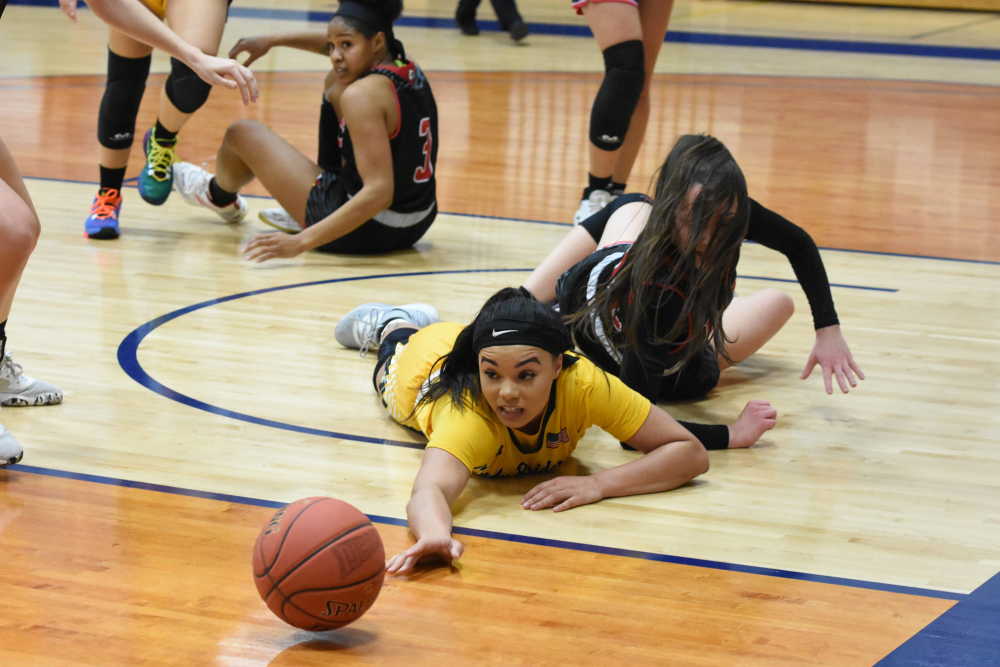 Three Rivers' Myia Yelder, bottom, pushes a loose ball to a teammate in the corner as a Mineral Area player falls to the ground during the Region XVI semifinals on Thursday, Feb. 27, 2020, at the Jason Gym in Jefferson City, Mo.
DAILY AMERICAN REPUBLIC/Scott Borkgren
Order this photo

Myia Yelder finished with a career-high 26 points for the Raiders to lead the team to an 89-68 win over Mineral Area in the semifinals Thursday in Jefferson City.

Moberly Area beat Jefferson 83-70 in the other semifinal. The championship is at 2 p.m. Saturday.

The second-seeded Raiders' kept the same strategy that's worked for them all season. Just keep running.

Three Rivers led wire-to-wire, but not by more than 10 points during the first three quarters. In the fourth, that deep bench and relentless pass helped the third-best offense in the country turn a 9-point lead to 17 points through the first 5 minutes of the fourth quarter and Three Rivers led by as much as 21 in the closing minutes.

Everyone played at least 15 minutes for the Raiders, which also got 36 points off the bench. The Cardinals relied heavily on their starters and played a short bench, with four for their 11 players earning fewer than 5 minutes. MasynMcWilliams, who led the team with 22 points, and Keanna Williams both played close to 38 minutes and the Mineral Area bench had five points.

The Raiders finish 3-1 against the Cardinals for the season. In Mineral Area's only win, they limited Three Rivers to 60 points. The Raiders then put up 96 in the first Region XVI matchup in Park Hills, and then 78 at home while limiting Mineral Area to 50 points.

It was a career game for Yelder, who added four rebounds, four assists, two blocks and two steals to her 26 points. Her previous season-best was 20 points, set in Three Rivers' regular-season finale against Crowder.

Yelder's offense has surged late in the season. The freshman guard scored in double figures four times in Three Rivers' first 14 games. Her season-high through the first month of the season was 10 points and her best during the first semester was 14.

Then she got 19 points on 8 for 9 shooting in a close win over Mineral Area to open the Region XVI season. Since then, Yelder has scored less than 10 points in only four games and with Thursday's performance against the Cardinals, she has scored in double figures in eight of her past nine games.

"Myia brings energy every game. Very coachable kid, knows how to score, knows how to play defense, and she's got arms that go on forever. She's hard to pass the ball around," Walk said. "She's played at a high enough level in the summer and at Conway (Ark.), that once she figured out how she could do what she was doing there and adapt it to what we were doing on offense, she got that figured out and the sky is the limit for her."

Deanay Watson had 10 points and 10 rebounds for her second double-double of the season.

Chaylea Mosby had 16 points and seven rebounds while Hannah Thurmon led the team with 12 rebounds.

Yelder gave Three Rivers the lead from the opening tip and propelled them early with nine points through the first 5 minutes of the game and 18 in the first half, nearly getting half of Three Rivers' 40 points.

"Lately I've been shooting when it's closer to crunch time, I put in extra shots, not like I was doing in the beginning. We just run and work on extra pass, extra pass, extra pass, so it opens more shots. They give me the opportunity to know the ball down when they pass me the ball," Yelder said.

Three Rivers (26-5), which has won 12 games in a row, took its first double-digit lead after Autumn Dodd made a 3 with under 3 minutes left in the first quarter, and Yelder closed the quarter with a free throw to put Three Rivers ahead by 10 heading into the first break.

The Cardinals (20-10) cut the lead to one possession after opening the second quarter with a 9-2 run.

Then Yelder made a pair of free throws and drew a reaching foul against Natalia Lalic, who went to the bench with three fouls and was leading the Cardinals with 10 points at the time. Lalic would finish with 12 ponts.

The Raiders kept a two-possession lead until Tyeshia Mitchell, who had 16 points and 10 rebounds, scored with 25 seconds left to set the halftime score at 40-37.

Katelyn South, who had 10 points, made a 3 midway through the third quarter that put Three Rivers ahead by eight, and Lalic countered with a 3 at the other end, and then South made another one from the same spot.

Lalic tried to make it four in a row, but missed short, and Yelder got a third-try putback to put the Raiders up by 10.

Three Rivers went into the fourth quarter ahead by nine, and layups from Watson and Jamiyah Thomas off turnovers about 4 minutes in pushed the lead to 14.

Kalyssa Hollis rattled in a 3 a minute later to make it 17 points with 5 minutes to go as Three Rivers put the game away.

"I feel like we had a much bigger advantage. I feel like after we hit a shot, our momentum just didn't stop," Yelder said.

"That has been our emphasis all year with them. Especially with Lalic, we wanted to make sure she didn't go off on us," Walk said.

For Saturday's matchup, Three Rivers and the top-seeded Greyhounds split their Region XVI games with the home team winning each time. Moberly also won 71-63 in the Region XVI Showdown.

"We need to play hard, work hard and just play like us. Don't feed into any negativity and just continue to play like how we play," Watson said.

With both teams finishing 7-1 in region play, Moberly took the fourth tiebreak with a better record against non-region Division I opponents.

When Three Rivers lost at Moberly Area, the Raiders were 7 for 15 on free throws while Moberly was 34 for 55.

Moberly is averaging 18.9 free-throw attempts per game this season. DeAnna Wilson leads the team in scoring with 16.1 points. Against the Raiders, she's finished with 18, 20, and 11. At the Libla Family Sports Complex, Three Rivers kept Wilson 1 for 9 shooting and 9 for 11 on free throws.