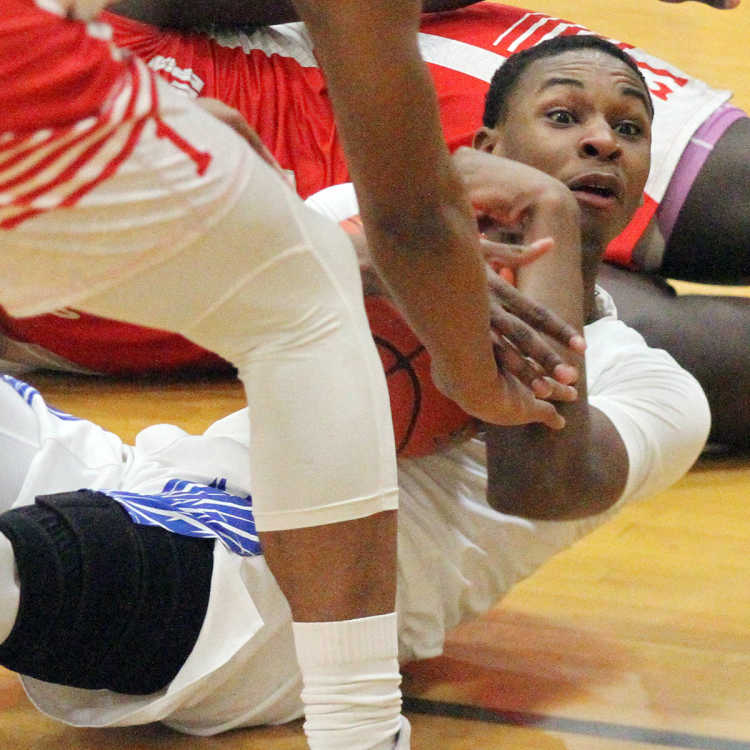 But he loves winning.

“I just go play and try to win,” Farmer said. “I don’t keep up with the numbers. I just love to coach and love to win.”

Farmer's squad won again Tuesday night. The legendary coach picked up the 750th victory of his varsity coaching career as the No. 1 seeded Charleston Bluejays knocked off the No. 4 seeded Caruthersville Tigers 94-55 in a Class 3, District 1 semifinal at Kennett High School.

Kennet athletic director Jim Vaughan presented Farmer with a plaque for reaching the milestone in front of a near-capacity crowd following the game.

“I didn’t know anything like that was going to happen,” Farmer said. “It was unbelievable."

The longtime defending district champion experienced little difficulty booking a return trip to the district title game. Charleston, which last lost a district tournament game in 2010, built a 22-point lead by halftime and led by more than 20 points throughout the second half.

“Going into the game we put an emphasis on playing hard,” Farmer said. “We wanted everyone to get after it and I think we accomplished that tonight.”

Charleston enjoyed two long strings of success in the first half. The Bluejays went on a 16-2 run in the first quarter and scored 15 unanswered points in the second period.

The Bluejays enjoyed similar success in the second half. Charleston padded its lead to 72-42 by the end of the third quarter and also won the fourth quarter by nine points.

“They are just so active and quick,” Caruthersville coach Lamonte Bell said. “We broke their press a few times but then we couldn’t make a basket. We also didn’t shoot the ball like we shot it the other night against Malden. Once you get behind against Charleston you are pretty much down if you don’t make shots.”

Senior guard Samuel Bledsoe was one of four Charleston players to score in double digits. Bledsoe knocked down five of the Bluejays’ six treys on his way to a game-high 27 points.

“If you leave him open he can knock it down,” Farmer said. “He’s a great shooter. He’s improved on every aspect of his game this season. He’s a good player.”

Caruthersville finishes its season with a record of 9-13. It graduates five seniors.

“Our guys worked hard,” Bell said. “We knew this wasn’t going to be our best shooting team coming into the season. But we thought we could hold our own because of our defense and athleticism. We did OK. I’m not upset about tonight, we just didn’t make shots. Charleston just smelled blood early and attacked.”

Charleston (24-4) will take on No. 2 seeded New Madrid County Central in the district final Friday at 7:30 p.m. at Kennett High School.

“We’ve been in the district final quite a few times,” Farmer said. “The more you’ve been there the scarier it gets. We’ve played New Madrid County Central twice and they are a very good team. We were probably going to have a game on our hands Friday night.” 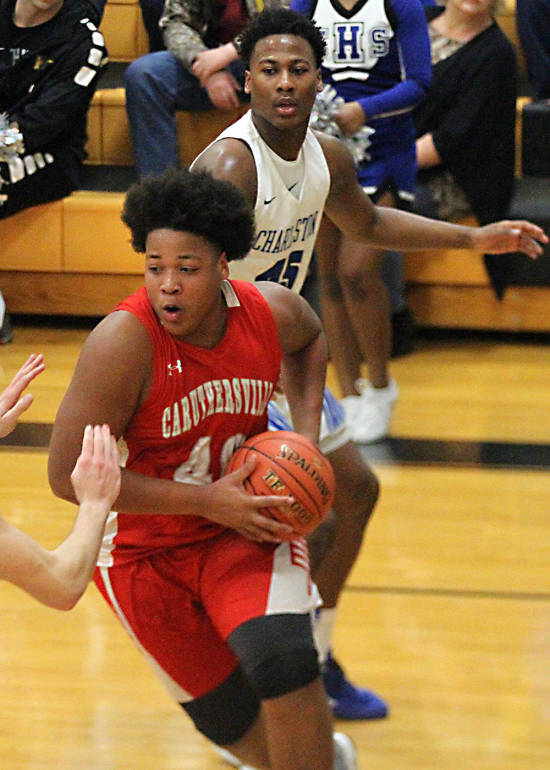 Photo by Dustin Ward, staff
Charleston’s Blessin Kimble (45) eyes Caruthersville’s Zhamius Smith as he penetrates to the basket in a Class 3, District 1 boys basketball semifinal Tuesday night at Kennett High School.
Order this photo
Comments
View 3 comments
Note: The nature of the Internet makes it impractical for our staff to review every comment. Please note that those who post comments on this website may do so using a screen name, which may or may not reflect a website user's actual name. Readers should be careful not to assign comments to real people who may have names similar to screen names. Refrain from obscenity in your comments, and to keep discussions civil, don't say anything in a way your grandmother would be ashamed to read.
Respond to this story