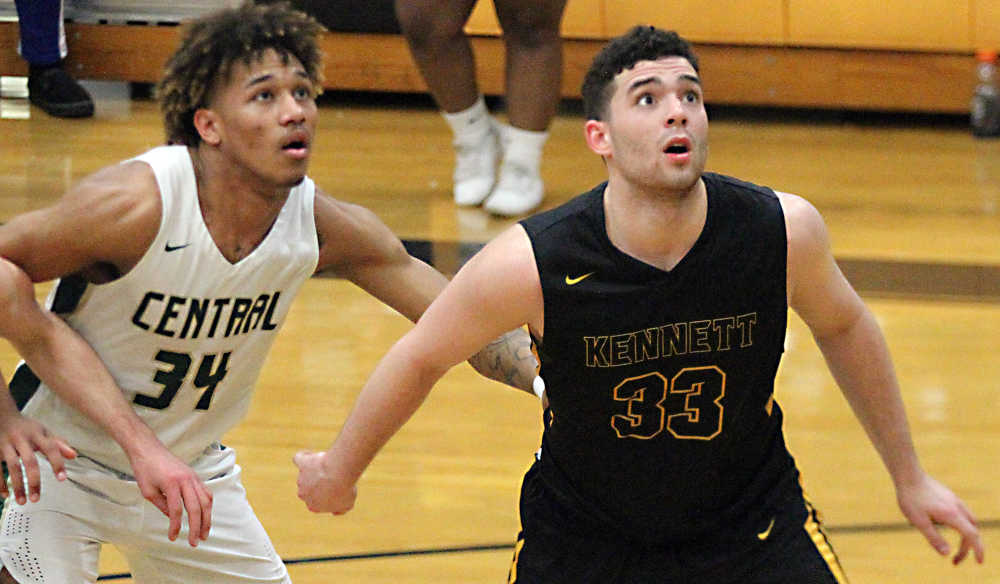 KENNETT, Mo. - It came down to the final shot but the New Madrid County Central Eagles found a way to beat the No. 3 seeded Kennett Indians 47-45 in a Class 3, District 1 boys basketball semifinal Tuesday night.

Six-foot-seven junior Donnie Brown hit a 3-pointer with four seconds remaining to give the Eagles a 47-45 lead and Kennett had a desperation 3-point shot rim out a few seconds later as the final buzzer sounded.

“Both teams played very very hard,” Eagles coach Lennies McFerren said. “Kennett is very well-coached and found a way to hit some shots to get back in the game. If they would have missed their shots we wouldn’t have been bitting our fingernails late. But hats off to the Indians because we were just lucky tonight.”

Kennett took its only lead of the second half at 45-44 when La’Quez Pulliam drove to the basket and made a contested shot with 25 seconds left.

After a timeout, New Madrid County Central inbounded the ball at half court with 20 seconds left. The Eagles eventually got the ball in the hands of Brown who drained a shot about several feet behind the 3-point-line and to the right of the top of the key.

“We wanted him to shoot it but not that deep,” McFerren said. “That was Brown. He took it upon himself to shoot that shot. I’m just glad he made the shot this time because there have been some games he missed that shot this year.”

Kennett called timeout with 3.4 seconds remaining following Brown’s trey. After the timeout, Pulliam pushed the ball down the floor and passed it to McMullan who released a shot a few feet behind the 3-point-line near Kennett’s own bench.

“It was a good play by Pulliam to kick it to McMullan,” Kennett coach Andrew Halford said. “We have a lot of confidence in his ability to shoot the ball. We told La’Quez to attack if he could get a layup or kick if off if needed. We got a good look but it was just one of those that didn’t fall.”

New Madrid County Central led by as much as 31-20 with 6:22 left in the third quarter before Kennett rallied back. Kennett cut the deficit to 35-30 by the start of the fourth quarter and rallied from seven down with 3:30 left to move ahead one in the final minute.

“We did not play well in the first half and dug ourselves a nine-point deficit,” Halford said. “We were scratching, clawing, and fighting to create some turnovers and get some transition baskets. We found a way to get back in it but Donnie Brown just hit a big shot late. They just made one play more than we did down the stretch.”

New Madrid County Central led 16-11 after one quarter and 29-20 at halftime. The Eagles did not allow a 3-pointer in the first half. But Kennett knocked down three treys during its second-half rally.

“We got away from the game plan for some reason,” McFerren said. “We didn’t change our defense. The defense was still the same but we allowed them to take the shots in the second half. They hit the 3’s to get the game where it was but we still lucked out and won.”

“Phillips didn’t play the game he is capable of playing tonight,” McFerren said. “He might have scored 17 points but he didn’t step up in the end like we know he can do. He’s got to step it up against Charleston. If he steps it up like I’ve seen him do at times this year he’ll have a good game come Friday night.”

“The work these seniors put in to get to where we are has been top-notch,” Halford said. “We will really miss these guys. They mean a lot of our program and myself. They are a bunch of hard-working guys that will be successful as they move on to the next step of their lives. And that’s something our coaching staff and school district can be proud of regarding these guys.”