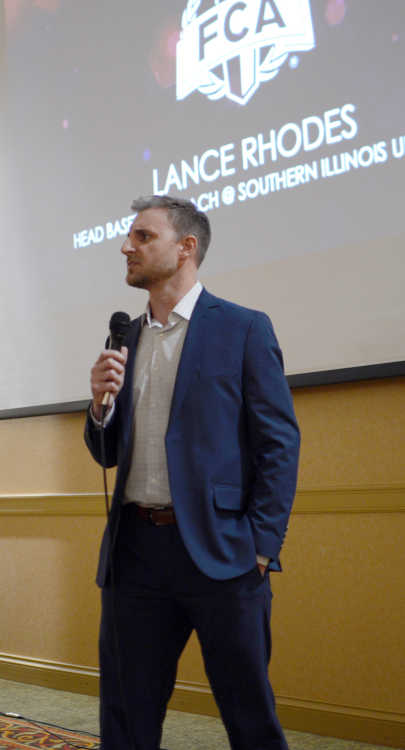 The current head baseball coach at Southern Illinois University in Carbondale, Ill., Rhodes made the trip down for an event that enters its second year in the area.

During his speech, Rhodes discussed how having a faith-based attitude intertwines with recruiting and being a head coach at a major university.

Additionally, he also talked about the struggles he dealt with when he graduated from college — Rhodes played baseball at both St. Louis University and Southeast Missouri State University — and how meeting the right people helped changed his outlook on coaching.

“FCA for me is so important and valuable because as a baseball coach and as baseball players, we get so consumed with that part of our lives,” Rhodes said. “And we sometimes forget what’s important. For a 15-to-20-minute setting on a certain day of the week, being able to come together with other men with struggles of their own, and just being able to talk about those things and understand the importance of what life is all about.

“Forget about the game of baseball for a little bit and then be able to go back out there and be rejuvenated and perform in a way that honors God. Our effort is what makes FCA so special for me.”

A Southeast Missourian at heart, Rhodes added that Sikeston holds a special place with him as well.

“Growing up in this area, it was one of those areas where everybody was friendly,” Rhodes said. “There wasn’t a stranger that you could meet. When you come back, it’s still the same way. Everybody knows everybody, and it’s just special to my heart.

“I can drive down roads and see memories in my mind of things that I was doing in high school. It’s just a special place.”

Rhodes was the second baseball-oriented speaker to address the crowd at the Miner Convention Center, with Matt Deggs being the first, when he came for the inaugural event in 2018.

When Rhodes accepted the job with the Salukis, Three Rivers FCA area representative Josh Mills said that getting him to speak was a no-brainer.

“As we started looking at people that were connected to our area that we knew were doing really good things in the sports world, it didn’t take too long to figure out that Lance would be one of our guys,” Mills said. “I know Scott Ashton, as well as Roger Lipe. I’ve used them both in different events in Sikeston, and so I approached them and said, ‘Tell me about your guy, Lance? How well do you know him? How’s he partnered with FCA?’ Both shared a tremendous amount of things they’ve seen him do and how he’s partnered with FCA.”